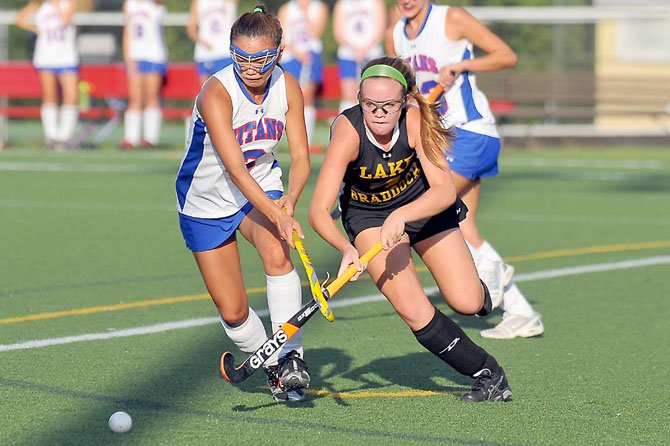 Taylor Livick, right, and the Lake Braddock field hockey team improved to 7-3 with a victory against T.C. Williams on Sept. 14. Photo by Louise Krafft.

Alexandria — The Lake Braddock field hockey team fell behind T.C. Williams in the first three minutes of their Sept. 14 match-up in Alexandria. Midway through the first half, Bruins Head Coach Amy Worrest called timeout with a message for her players: be aggressive.

"Sometimes we don’t always start in a good rhythm," Worrest said, "so I called a timeout to have them go after every ball."

Lake Braddock needed overtime, but the defending Patriot District champions responded with a 2-1 victory over the Titans. Senior forward Rachel Wimer tied the score with a goal with less than five minutes remaining in the first half and senior midfielder Maria Jose Pastor scored the game-winner in overtime.

The victory came two days after Lake Braddock lost to West Springfield, 2-1, in overtime. The Bruins improved to 7-3, including 2-1 in the district. They have won seven of eight since starting 0-2.