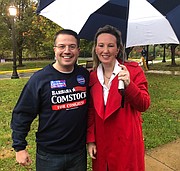 Comstock campaign volunteer Matthew White was thrilled when Congresswoman Barbara Comstock herself made an appearance at the Great Falls Library polling station, where White was manning a Republican information booth. White is from Arlington. “I can’t even vote for her” but he felt strongly that he needed to help in this “critical contest.” 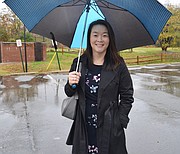 Soo Walker voted for Democratic challenger Jennifer Wexton over Republican incumbent Barbara Comstock in the hotly-contested race for the 10th Congressional District. Walker, who works for a nonprofit in D.C., says “it’s time for a change, and time to send a message that Trump’s behavior and his policies and attacks are not acceptable. It’s just not ok.” 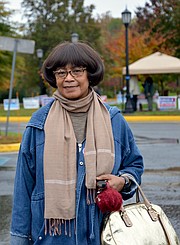 Ealene Bevans, a retired school teacher, voted “strict Democrat,” as the party she believes appreciates her values of supporting children, “real tax cuts,” and educational and employment opportunities for everyone. Disapproval of President Trump also factored into her political decision-making.

Anna and Sia Kaviani work in the printing industry. The husband and wife both voted Republican, primarily for “the growing economy and for immigration and security policies, doing things the right way.”

Election Day 2018 has finally arrived. After months of contentious debates, rallies and advertising, it’s time for the voters to have their say…and a steady rain wasn’t keeping the voters in Great Falls from doing just that.

At the Great Falls Library, in the hotly contested and widely-watched 10th Congressional District, the cars kept pulling in and the voters kept lining up.

The incumbent candidate herself, U.S. Rep. Barbara Comstock (R), made an appearance there in the early hours of voting, much to the delight of her campaign volunteer Matthew White, who was pleased to snap a photo with Comstock, who is facing Democratic challenger Jennifer Wexton to keep her seat in Congress.

White is not from Great Falls, but was working alongside Republican precinct chair Jeff Grieco at the booth in front of the library, handing out sample ballots and ready and willing to discuss the Republican platform.

“I’m from Arlington, said White. “I can’t even vote for her, but I’ve done the door-knocking three times, maybe 300 doors. This is an important contest, and I wanted to do what I could to help out,” he said.

Coming from outside the district “to help out” was also observed at the Democrats’ booth, where a Restonian joined forces with locals Jennifer Bond, Don Lowry, and precinct captain Art Kingdom.

With high confidence that his candidate, Gerry Connolly, would win re-election in the 11th District which covers Reston, this poll worker from Reston decided to head over and help out “where there’s a real fight and everyone is needed.”

A number of Great Falls voters were willing to stop and answer a quick exit poll for the Connection.

Soo Walker, who works for a nonprofit in D.C., voted straight Democrat on her ballot, in large part due to her disapproval of President Donald Trump. “We need to send a message that his behavior is not okay. That’s one reason I voted for Jennifer Wexton.”

Ealene Bevans feels the same. The retired teacher, who “votes every time, no matter what, because voting is that important,” also disapproves of the President’s behavior and negative and divisive speech. She’s hoping that the Democrats will “really work” for policies that support women, children, “real tax cuts” and education and better jobs for more people.

Tom Green works in IT for the government. Reasonable housing costs, transportation, lower taxes and maintaining economic growth are his local issues. He voted for Comstock for Congress, but split his vote and cast a ballot for incumbent Democrat Tim Kaine instead of Republican challenger Corey Stewart to represent Virginia in the U.S. Senate alongside Sen. Mark Warner.

“I think it will be a good thing if the Democrats take the House. It might lead to some real debate on the issues, and with some new people in Congress, getting different ideas out there.” Green doesn’t think that Corey Stewart could provide that moderate balance. In fact, he wouldn’t vote for Stewart “if you paid me.”

The rain kept pouring down, but Anna and Sia Kaviani were still willing to stop and talk about their political decisions.

The couple, who are in the printing industry, said that they were actually influenced to vote Republican by their 21 year-old, recent graduate son. “He is able to get a good job in this economy,” said his father. “He talked to us about his older cousins who couldn’t find good employment for a long time, and not that long ago. We need to keep a good economy going.”

“Security, and immigration the right way” also influenced the Kaviani’s votes, said Anna, who think the Republican Party under Donald Trump will be the ones to ensure that.

Doris Hoehn works in the floral world, so maybe it’s not unexpected that she also has an interest in environmental protections and fighting climate change – things she doesn’t see any of the Republican candidates working for as much as the Democrats.

Fairfax County officials reported at 10 a.m. on Election Day that an estimated 31.58 percent of the county’s 702,745 active registered voters had already cast their ballots, either in person at one of the county’s 243 precincts, or by absentee ballot.