Letting Their Votes Do the Talking in McLean
Votes 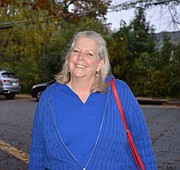 Catherine Sheeran, a consultant from McLean, cast her ballot for the Democrats, in particular her incumbent Congressman Don Beyer. “I think he really tries to get things done in a bipartisan way. We really should not be a nation so divided.” Sheeran also voted Democrat because of her stance on gun control. I’m tired of the ‘thoughts and prayers’ response. It hasn’t gotten us anywhere. …We need common-sense gun ownership reform.” 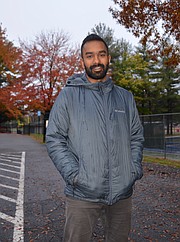 Saad Ahmed, a software consultant, says he generally “leans fiscally conservative and socially liberal.” In the past, Ahmed said that could have meant more Republicans among his votes, but he thinks the GOP’s more measured social platform might be part of a “bygone era.” “With a leader like Donald Trump, it pushes me into the Democratic side. In the end, it’s about voting for who will respect us, our rights and our lives.” 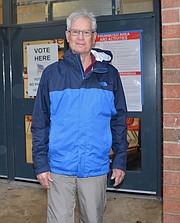 William E. Pickens III is retired from Air Force military service. “Corey Stewart (the Republican candidate for Senate) is just too far right for me, but I couldn’t vote for Tim Kaine, even though I think he has a lot of the right ideas and generally does a good job.” To Pickens’ way of thinking, the fact that Kaine aligned himself with Hillary Clinton during the 2016 Presidential race, puts him outside “ever voting for him again.” Pickens went with Libertarian candidate Matt Waters since “not voting is not an option in my opinion.”

Election Day 2018 has finally arrived. After months of contentious debates, rallies and advertising, it’s time for the voters to have their say.

At the polling station at McLean High School in the 8th Congressional District, the voters weren’t saying much out loud or for the record.

Erin McCluskey (“no photos, please!”) wouldn’t discuss her ballot choices except to say “I’m letting my vote do my talking for me.”

“They split up the polling places in McLean,” said the contingent manning the “get your Democratic Ballot here” booth. “That could be why there’s been no line, but it’s steady. Even with the rain.”

“Don’t worry,” said voter William E. Pickens III, a retired Air Force vet. “Lot’s of the folks around here come later, like my wife, who’s sleeping in! There will be a good turn out, I’m sure.”

PICKENS surprised himself this year by “voting for an independent candidate for Senate for the first time.” He said he likes Kaine overall and would have voted for him, but couldn’t bring himself to support someone “who had ever aligned with Darth Vader in skirts” – as he characterized 2016 Presidential candidate Hillary Clinton, with whom Kaine ran as her Vice President pick.

“And Corey Stewart is just too far right, and since not voting is just not an option, that’s why I voted for Waters [Libertarian candidate Matt Waters]. Of course, my wife and I will probably cancel out each other’s votes like we usually do.”

A few others doing their civic duty were willing to go on record with their votes and their reasons, like Catherine Sheeran, who supports the Democratic ticket, especially Congressman Don Beyer. “He seems to always looking for the bipartisan answer, the way to get things done.”

Common sense gun legislation is also an issue for Sheeran. “Not take all your guns away, just reasonable controls like universal background checks and types of weapons. I’m tired of the ‘thoughts and prayers’ response. It hasn’t gotten us anywhere, and the Republicans just don’t want to deal with this issue.”

Saad Ahmed also checked for Democrats on his ballot. “I consider myself leaning to fiscal conservative, socially more left. Historically, the Republicans could be counted on for that fiscal responsibility and values that weren’t so negative, but I think that’s a bygone era.”

AHMED struggled with the bond issues before him, but voted in support of tax exemptions in certain circumstances for real property subject to recurrent flooding and for extending partial tax exemptions for the widowed spouses of veterans who move from their primary residence.

“I guess, a lot of my vote is about who will respect our rights and our lives,” Ahmed summed up.

In that short, two-hour window, 6-8 a.m., there were no other voters who could be convinced to share their opinions.

“Sadly, it’s not really surprising, I guess,” said the woman who was the sole Republican greeter during that time slot. “More than ever, people don’t want the hassle if their view is different from a friend, or neighbor, or worse, a client that could affect their business. It’s not the way it should be, but it’s the way it is right now.”

Fairfax County officials reported at 10 am on Election Day that an estimated 31.58 percent of the county’s 702,745 active registered voters had already cast their ballots, either in person at one of the county’s 243 precincts, or by absentee ballot.