Family and friends celebrate the life of Chris Sarantis of Burke. 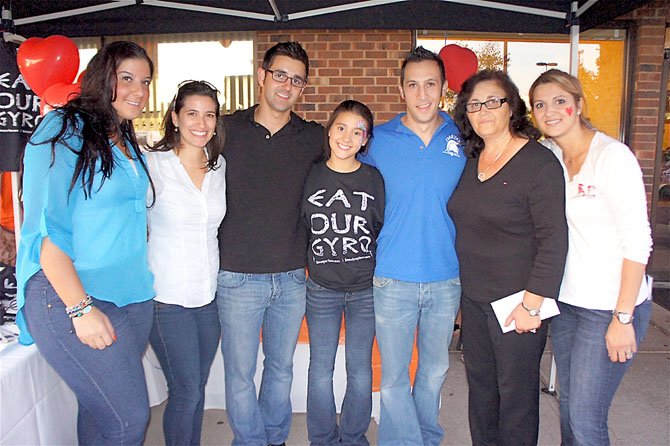 Is it always this packed on a Thursday evening at Spartans Family Restaurant in Burke? “We are always pretty busy, weekdays, weekends,” said George Sarantis, son of the establishment’s late owner and founder, Chris Sarantis, “but tonight it was a little different. Tonight, the line started early, at 5:30.”

The celebration started on the sidewalk. Heart-shaped balloons, face-painting and t-shirts for sale with proceeds benefiting the American Heart Association got things going even before patrons stepped inside to celebrate and remember the life of restaurant owner Chris Sarantis.

Obviously, word had spread that tonight Spartans, and the family’s second restaurant, Olympians, opened in Alexandria in 2003, were hosting a celebration of their patriarch’s life on the fifth anniversary of his sudden death from heart complications.

Outside the Burke restaurant family members greeted guests with big, heart-shaped balloons and a face painter for the kids—and quite a few adults. Inside, the atmosphere was more that of a family reunion than a casual dining experience.

Vicki Fineskos remembers Chris Sarantis as a friend first, before she came to work at Spartans 14 years ago.

THERE WERE HUGS AND KISSES between patrons and wait staff. At more than one table, glasses were raised in toasts and stories were told about how Chris Sarantis had come to the rescue in his quiet and practical way. While the majority of the patrons were locals, and obviously repeat customers by their familiarity with the place, the people and the menu, some of the diners had come a good distance to honor their friend. “He was everybody’s friend,” said his daughter Eleni Linardakis. “This place became a community gathering place, and if someone needed something, or looked troubled, he would sit down with them and help work it out. That’s who he was.”

That’s probably why more than 1000 people attended his funeral, and why people like then-Supervisor Sharon Bulova (now chairman of the Fairfax County Board of Supervisors, D-At-Large) praised him as having been a real anchor of the community.

Rich Yarish agrees. “Chris kind of adopted me and my wife. He and his family helped us through a very difficult time due to medical issues. We got to know them at their old restaurant in Saratoga. Turns out that our wedding anniversaries were just two weeks apart, the same year. From that first meeting, we have been jointly celebrating every year. What a shock when I called to see when and where we were having the event in 2007. His daughter Eleni answered the phone and told me that her dad had died. I still can’t believe it.” Yarish has since moved to Fredericksburg, but comes back to visit often. “And I wouldn’t have missed tonight for anything,” he declared.

The staff at Spartans also had plenty of fond remembrances. “I started out as a customer here,” said server Vicki Fineskos. “This family just takes you in. I came here for Mrs. Sarantis’ baby shower. I think I said something like ‘I really love being here’ to Chris. Two days later he asked if I wanted to work here and be part of the family. That was 14 years ago.” Alex has been a server for over 10 years. “He’s all that’s missing tonight,” he said. “That man had a heart of gold.”

IN HONOR of the beloved husband, father, friend and community force, the Sarantis family chose to donate 20 percent of the day’s proceeds from both restaurants to the American Heart Association. Judging by the crowds at Spartans, that donation will be as sizeable as the heart and spirit that inspired it.