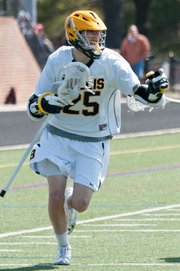 Potomac — On March 30, the Bullis boys’ lacrosse team hosted the Coronado Islanders, who made the cross-country spring break trip from California.

After the game, Bullis standout Nick Fields was asked if East Coast-West Coast pride was at stake during a Saturday afternoon in Potomac.

“Them coming all the way from Cali,” Fields said, “we wanted to make sure it was worth their trip and give them a good game.”

If a challenge is what the Islanders desired, Bullis offered a lopsided show of hospitality.

The Bulldogs defeated Coronado 10-1 at Bullis School. In a game marred by 16 penalties — nine against Coronado — Bullis led 3-1 at halftime before outscoring the Islanders 7-0 in the second half.

Bullis head coach Robert Pollicino said the thought of playing for coastal pride wasn’t a focus of the Bulldogs.

“I think for us it’s really more IAC pride,” Pollicino said. “I think all of us root for each other outside of our league season. We want to see [Georgetown] Prep and Landon and St. Stephen’s and Episcopal and St. Albans win their games. We want to be sort of the preeminent league in the area. There’s some pride there.

“East Coast-West Coast? The game is getting so good all over the place, so I don’t know how much that comes into play.” 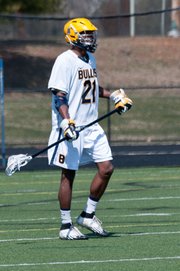 Nick Fields is the leader of the Bullis defense.

“We know Mitchell is our offensive catalyst,” Pollicino said. “When he’s on and he’s scoring, it gives us opportunities to be successful. It stretches the defense because he can let it go from 12, 15 yards. It can free up the inside so it certainly helps us when he’s on.”

Fields, who will play collegiately at Johns Hopkins, is Bullis’ top defensive player. Last season, ESPN.com ranked fields the No. 3 junior in the nation.

“Nick’s a phenomenal athlete,” Pollicino said. “Nick could probably be going to play Division I football, he’s that kind of an athlete. … He just does so much between the lines. His presence gives the guys comfort. They know that if he’s out there, he’s going to help them and pick them up.”

The victory improved Bullis’ record to 3-4.

“It was our last game of spring break,” Goldberg said. “… We had a tough loss last week to McDonogh and we wanted to bounce back and get ready for our IAC schedule.”

Bullis will travel to face St. Paul’s at 4:30 p.m. on Wednesday, April 3. The Bulldogs will host Ballston Spa High School at noon on Saturday, April 6.