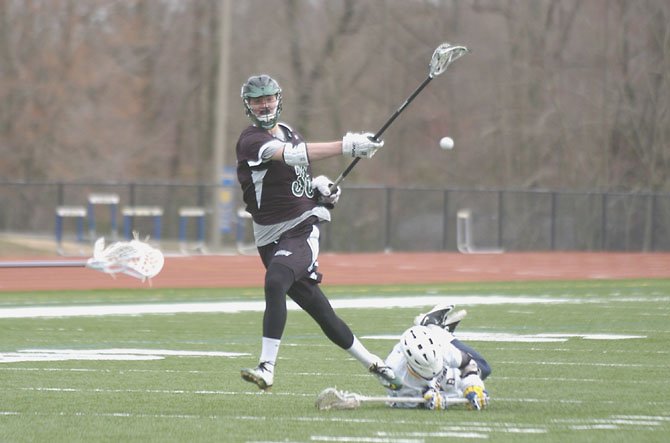 Senior defenseman Brad Dotson and the Langley boys’ lacrosse team lost to Robinson on March 28, but bounced back hours later with a victory against Chantilly. Photo by Craig Sterbutzel.

Fairfax — With its top attackman sidelined due to injury and a standout midfielder out for disciplinary reasons, the Langley boys’ lacrosse team took the field hours after losing to Robinson during the Ram Slam spring break tournament.

The Saxons’ opponent: Chantilly, which Langley defeated in three of the previous four state championship games.

While the odds were in favor of the Chargers knocking off Langley, the Saxons instead issued a reminder of their standing as four-time defending state champion.

Langley defeated Chantilly 8-5 on March 28 at Robinson Secondary School. The Saxons built a 5-1 halftime lead, survived a Chantilly comeback attempt and held on for the victory.

THE WIN came hours after the Saxons lost to Robinson, 9-6. After the game, senior midfielder Luke Salzer was ejected for swearing at an official, forcing him to miss the Chantilly contest. Injured junior attackman J.T. Meyer was also unable to play.

With Salzer and Meyer out, junior attackman Brian Orme stepped up with three goals against Chantilly.

“That was an ugly game the first game,” Langley head coach Earl Brewer said about the loss to Robinson. “I’ll take some blame for that. I didn’t coach a good game [and] we definitely didn’t play a good game. … It said a lot about our kids to be able to bounce back like that. That was some very good lacrosse we played [against Chantilly]. You can’t play two lacrosse games in one day --- it ain’t baseball --- but we did and I’m very happy with that.”

“It’s fun to come out and play them,” Dotson said. “The target is always on our back and they’re always trying to get us. It means a lot to both teams and it’s a big game every time.”

“It said a lot about our kids to be able to bounce back like that. That was some very good lacrosse we played. You can’t play two lacrosse games in one day --- it ain’t baseball --- but we did and I’m very happy with that.”

Dotson said the Saxons might have benefited from hanging out together inside Robinson Secondary School between games during the spring break tournament.

“We have a lot of new guys this year and the chemistry is kind of bad, and that leads to us coming out slow a lot of the time,” Dotson said. “We definitely came out slow [against Robinson]. We went down early and it’s just hard to fight back from that. … I think [spending time together] actually helped a lot. We haven’t really had a time for everybody to come together and pal around. I think that really helped us.”

Three consecutive Chantilly goals cut the Langley lead to 5-4 in the fourth quarter, but the Chargers couldn’t complete the comeback.

“I don’t think that we played good team defense,” Chantilly head coach Kevin Broderick said. “… Langley dictated what they wanted to do. They’re a very skilled group of players, they took advantage of it.”

EARLIER IN THE DAY, the Chargers defeated Highland, 15-10.

Langley improved to 3-3 with the win over Chantilly. The Saxons will travel to face McLean at 6 p.m. on Friday, April 5. Chantilly dropped to 4-1. The Chargers host Yorktown at 7:15 p.m. today, and Hamburg (New York) at 1 p.m. on Saturday, April 6.

“Not having Luke this game and after losing to Robinson,” Dotson said, “we definitely had a chip on our shoulder and we wanted to come out and win this game.”