Madison right fielder Ben Socher had a double and a two-run homer against Oakton on Saturday, April 6.

Vienna — The Oakton baseball team started strong on a sunny Saturday afternoon, April 6, scoring three runs in the first inning. But while the Cougars came out with a bang, it was a blast by Madison senior Ben Socher that put the finishing touch on a lopsided Warhawks victory.

Socher launched a two-run homer in the top of the seventh inning, putting an exclamation point on an 11-3 Madison victory during the battle of Vienna at Oakton High School. The Cougars came into the contest undefeated and ranked No. 4 in the Northern Region, but failed to hold a 3-0 lead as the No. 1 Warhawks came storming back.

"We knew Oakton was hot coming into this game being undefeated," Socher said, "but we knew if we just kept at it, kept with our hitting approach at the plate, kept playing defense, we’d be fine."

Madison improved to 9-1, earning its ninth straight win after dropping its season opener to Fairfax on March 20. The Warhawks took the lead for good with four runs in the third inning, including a two-run single by third baseman Dan Powers.

Oakton suffered its first loss after a 7-0 start.

"[Madison] answered back, they did what they needed to do and then we just couldn’t get it going again," Oakton head coach Justin Janis said. "… We need to take the right lessons from it. We need to learn how to respond when things aren’t going our way." 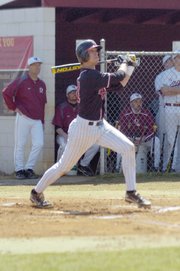 Third baseman Dale Good had two hits and an RBI for Oakton. Shortstop Mitchell Carroll had a two-run double.

"We have 10 [Concorde District] games coming up," Good said, "and we have to realize this game doesn’t mean anything for that part of our season."

Madison remained No. 1 in this week’s edition of the Northern Region coaches poll. The Warhawks host Langley at 6:30 p.m. today. Madison will host McLean at 6:30 p.m. on Friday, April 12.