City Votes 6-0 to Get Out of Water Business
Votes

City Votes 6-0 to Get Out of Water Business 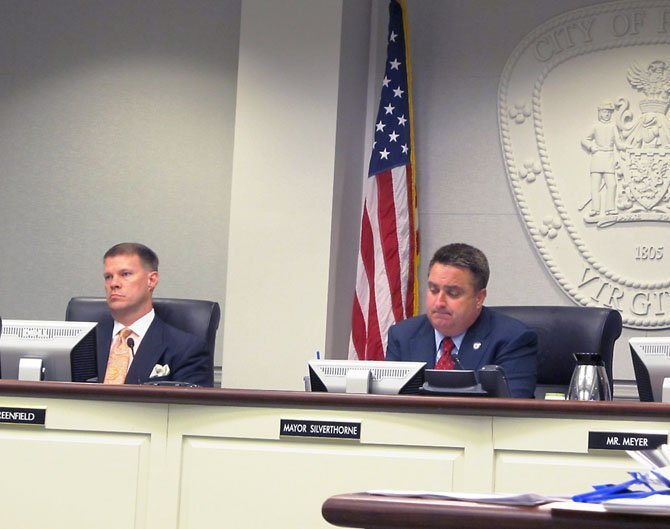 Fairfax City Council member Jeff Greenfield and Mayor R. Scott Silverthorne listen to residents during a public hearing on Tuesday, April 9, debating whether to remain in the water business. Photo by Victoria Ross.

After a half century of controlling its own water system, the City of Fairfax voted unanimously Tuesday, April 9, to get out of the increasingly costly water business.

“Who we procure water from doesn't define us. We’re not our water system. This is a vote for our present and our future.”

“Change is, indeed, never easy,” said Mayor Scott Silverthorne, at the end of a public hearing on the issue Tuesday. “I was firmly in the other camp a year ago. … I know this has been painful and none of us were thrilled having to make this decision. At the end of the day we all believe it's the right course of action.”

City of Fairfax Utilities Director Rick Thoesen gave council members a report on the benefits of selling its water system and joining with Fairfax Water.

Council members were sensitive to the issue of civic pride and the city’s long history of independence.

“It’s an important part of our history. We’re all proud of our independent water system. But, we’ve been forced to reevaluate,” said council member Ellie Schmidt. “I don’t like giving up control, but … our citizens will benefit from lower water rates.”

“We have to set pride to one side, and focus on the business decision,” said council member Jeff Greenfield. “We have a responsibility to focus on present and look to future. We have opportunity and obligation to save our customers water and high quality.”

Council member Dan Drummond contended the city’s pride of place is not dependent on its water system.

“Who we procure water from doesn't define us. We’re not our water system. This is a vote for our present and our future,” Drummond said.

Before Tuesday’s vote, city council members heard from about a dozen residents, most of whom spoke in favor of converting to Fairfax Water.

“I’m retired on reasonably fixed income,” said longtime city resident Wayne Turk. “When I look at the projected cost to stay in the water business, it makes me awfully nervous. One of the reasons we're thinking about keeping this is city pride? Doesn't seem like that’s a good idea,” Turk said.

A few residents said they remained opposed to selling the city’s water system, and suggested putting the question to a referendum. 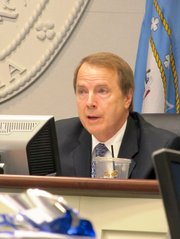 Fairfax City Council member David Meyer explained why he decided to vote in favor of getting out of the water business.

Council member Steve Stombres said the city does not have time for a referendum on the ballot.

“We have pushed this back as far as we can under our mediation agreement … I have always been proud that we had our own water system, but things have changed. I believed the community was willing to pay a premium to stay in water business, but we are long past the economic viability of that. I am satisfied the benefits outweigh the drawbacks,” Stombres said.

Fairfax County Board of Supervisors Chairman Sharon Bulova reacted swiftly to news of the unanimous vote. "I am very pleased. This is a win-win decision for both Fairfax City and Fairfax County residents,” Bulova said.

The lawsuit stemmed from an ordinance enacted in December, 2011, by the Fairfax County Board of Supervisors that gave the county broad powers to determine how residents got their water and how much they paid for it.

County officials said the new law was an attempt to ensure that all county residents pay a “fair and reasonable” rate for their water. But city leaders said the ordinance was a blatant power grab, and promptly sued the county.

In choosing to get out of the water business, the average water residential bill will be about $340 by 2018, compared to $894. Average commercial customers will see significant cost savings as well, with annual bills averaging $2,481 under the Fairfax Water plan versus $6,528 if the city retained its utility.

Fairfax County resident Kirk Randall, whose home borders the City of Fairfax, said he is thrilled with the decision.

Randall is one of the 21,000 county residents who has paid 71 percent more for water because he gets his water from the City of Fairfax rather than Fairfax Water.

“I’m pleased that our water rates will actually decline instead of doubling or tripling under the status quo. However, while lower water rates are high on my list of priorities, perhaps even more important is reliability.”

Silverthorne said the single factor that changed his mind was the advantage of a “retail option,” vs. a “wholesale” option.

After mediation with Fairfax county and Fairfax Water, a “retail option” was put on the table, and it’s this option that changed the mind of Silverthorne and many city residents. By becoming “retail” water customers, the city will essentially sell its water system to Fairfax Water, which will take over all water production, transmission and distribution functions to deliver its water to the city’s existing customers.

By converting to Fairfax Water, city officials said city water customers will realize a number of benefits, including:

Silverthorne, who was elected mayor in May 2012, said he believed this was the right decision for current and future residents. “I can see, years down the road, if we had kept on this path, the future mayor and city council would say ‘what in the world were they thinking?’”

“This is a historic decision,” Silverthorne continued. “We have vetted this decision and we have kept the community fully informed and involved. We can be proud of that.”