City of Fairfax Wants to Get Out of Water Business
Votes

City of Fairfax Wants to Get Out of Water Business

Civic pride and an “entrepreneurial spirit” are not good enough reasons to justify the millions of dollars it takes to own, maintain and litigate to keep the City of Fairfax in the water business. 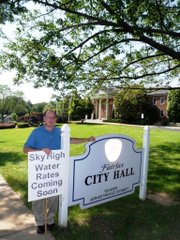 Kirk F. Randall, a Fairfax County resident who is tired of paying higher prices to the City of Fairfax and Falls Church for his water, stands outside Fairfax City Hall on Armstrong Street carrying the sign “Sky High Water Rates Coming Soon.” Randall has been lobbying local officials for months to allow him, and county residents in similar situations, to join Fairfax Water, the county-affiliated water utility, which will reduce his quarterly water bills by at least 50 percent.

That’s the conclusion City of Fairfax Mayor R. Scott Silverthorne, along with city council, drew after months of battling Fairfax Water and Fairfax County to keep its water system independent.

During a news conference Sunday at City Hall, Silverthorne along with City Council member Dan Drummond and City Manager Bob Sisson, said the city is now “re-examining a possible agreement with the Fairfax County Water Authority (Fairfax Water) as a way to save residents and businesses money and curtail the increasing costs of running a small water system.”

The City Council decided last spring to remain in the water treatment business and not sell its assets, such as the its 50-year-old water treatment plant to Fairfax Water.

“Since that time, however, the city and Fairfax Water, with the urging of a federal court mediator, have discussed an opportunity to stabilize current and future customer rates," Silverthorne said.

He added that the transition to Fairfax Water rates would take about three years.

In the next few days, City of Fairfax water customers will receive a letter from the City of Fairfax mayor and City Council with details about the proposed deal with Fairfax Water.

The city will hold two public meetings at the Sherwood Community Center, 3740 Old Lee Highway, on Thursday, March 21, at 7 p.m. and Saturday, April 6, at 9 a.m.

SILVERTHORNE SAID the city’s lawsuit against Fairfax County—which halted the county from enacting an ordinance to regulate the city’s water fees last July—is currently on hold.

The lawsuit stemmed from an ordinance enacted in December 2011 by the Fairfax County Board of Supervisors that gave the county broad powers to determine how residents got their water and how much they paid for it.

County officials said the new law was an attempt to ensure that all county residents pay a “fair and reasonable” rate for their water. But city and town leaders said the ordinance was a blatant power grab, and promptly sued the county. 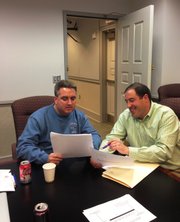 Mayor R. Scott Silverthorne discusses the benefits of selling the city’s water to Fairfax Water with City Councilman Dan Drummond during a news conference at City Hall Sunday, Feb. 24. The information was embargoed until 3 p.m. on Monday, Feb. 25.

“There is a sense of civic pride in this,” Silverthorne said during the news conference, “I’m asking our residents to put that aside and work with Fairfax Water.” Silverthorne, who was elected mayor in May 2012, said he was doing this for current and future residents. “I can see, years down the road, if we kept on this path, the future mayor and city council would say ‘what in the world were they thinking?’”

Before the City Council makes a final decision on April 9 to sell its water system to Fairfax Water, they want community feedback and will host a series of public meetings, Silverthorne said.

“This is an opportunity for residents and businesses alike to save substantial amounts of money on their water bills while slowing the steep growth in water rates the city has been facing for many years,” Silverthorne said. “This is a historic decision that needs to be made with the community fully informed and involved.”

By 2018, if the city were to “stay the course,” and construct its $45 million plan to refurbish the Loudoun Treatment Plant, annual city residential water bills would average about $894. However, if the city chose to go with Fairfax Water, the annual water bill would be $340. Average commercial customers would see significant cost savings as well, with annual bills averaging $2,481 under the Fairfax Water plan versus $6,528 if the city retains its utility.

If the city moves forward with Fairfax Water, it will also avoid spending hundreds of thousands of dollars on attorneys’ fees to press on with the lawsuit it filed over the county’s 2011 ordinance that gives the county the authority to review the city’s water rates.

The city currently has no long-term backup for its Loudoun County treatment and transmission facilities. Each time the city declares a system emergency—which has occurred about every five weeks in recent years—it relies on the largesse of Fairfax Water to provide it with water priced below Fairfax Water’s cost, which disadvantages the water utility’s customers.

Jeanne Bailey, a longtime city resident and the spokesperson for Fairfax Water, said that many city residents don’t fully understand the vulnerability of the city’s system.

She said Fairfax Water has 17 billion gallons of upstream storage ready to go in the event of a drought, but specifically prohibits the city from buying emergency water during a drought because it’s an event that can be “planned-for,” not an emergency.

“Fairfax Water is the city’s only emergency back-up, and reliable long-term backup is expensive for us to provide. We’re happy to help, but we have to be fair to our customers as well,” she said in a July interview.

“At some point in time, they are either going to have to spend many tens of millions securing long-term back-up service elsewhere, or buy it at cost from Fairfax Water.”

Fairfax County resident Kirk Randall, whose home borders the City of Fairfax, said he is thrilled with the recently-elected mayor’s decision.

Randall is one of the 21,000 county residents who paid 71 percent more for water because he gets his water from the City of Fairfax rather than Fairfax Water, the county-utility.

“Not only have I had no choice but to buy more expensive water for more than 26 years, but I don’t get to vote on the city’s decision because I’m a county resident. It’s absurd,” Randall said.

Randall, 62, worked for more than three decades as a utility economist with the federal government and became a “reluctant” water expert when he realized how much more he and his neighbors were paying. In the past four years, he has amassed thousands of pages of documents relating to water issues, and can cite chapter and verse when it comes to the history of the highly decentralized world of water operations—where dozens of public agencies are involved in the purchase, sale, distribution and delivery of water to residents.

“I’m pleased that our water rates will actually decline instead of doubling or tripling under the status quo. However, while lower water rates are high on my list of priorities, perhaps even more important is reliability,” Randall said, noting the city’s single source water system has no backup should the city experience another drought.

“When the deal is done, the city’s customers will have their water provided by one of the most robust water systems in the entire country. That is truly a win-win outcome for everyone.”

UNDER THE AGREEMENT that will be considered by the Fairfax City Council on April 9, the city will sell most of its water assets to Fairfax County affiliated Fairfax Water. These assets include the water production facilities and reservoirs in Loudoun County ("Goose Creek”), the transmission line that brings water to the city limits and the city’s distribution facilities, which include the lines that deliver water throughout the city and nearby Fairfax County to homes and businesses.

The approximately 21,000 city citizens and 21,000 county citizens who now purchase their water from the city will then become customers of Fairfax Water and will no longer pay their water bills to the city.

Over the past year, the city has been considering several options. The so-called “wholesale option” would be for the city to shut down and sell its Loudoun County facilities but keep its distribution system within the city and nearby portions of the county. Under that option, the city would purchase water at wholesale from Fairfax Water and rebrand it into Fairfax City water that could then be distributed by its own utility department employees to the city’s existing customers through its own distribution facilities. This would allow the customers to share Fairfax Water’s economies of scale for water treatment, but its distribution costs would still be significantly higher because the city’s distribution system is so much smaller than that of Fairfax Water.

The “retail option,” the option that Silverthorne and the city council would like residents to approve, is for the city to essentially sell its water system—lock, stock, and barrel—to Fairfax Water, which would take over all water production, transmission, and distribution functions to deliver its water to the city’s existing customers. The city’s existing customers would then pay the same water rate that Fairfax Water charges its Fairfax County customers, joining the hundreds of thousands of Northern Virginia residents who already enjoy the lowest water rates in the metropolitan region.

Fairfax County Board of Supervisors Chairman, Sharon Bulova, said the city’s decision was a “win-win resolution to the provision of water for both city and county residents who currently receive their water from the city’s system.”

“Fairfax County and the City of Fairfax have a long history of working together positively on initiatives that benefit our respective communities. One example of this collaboration is construction and operation of the Fairfax City Regional library. We believe this arrangement to improve service and reduce water rates is another example of this positive relationship,” Bulova said.