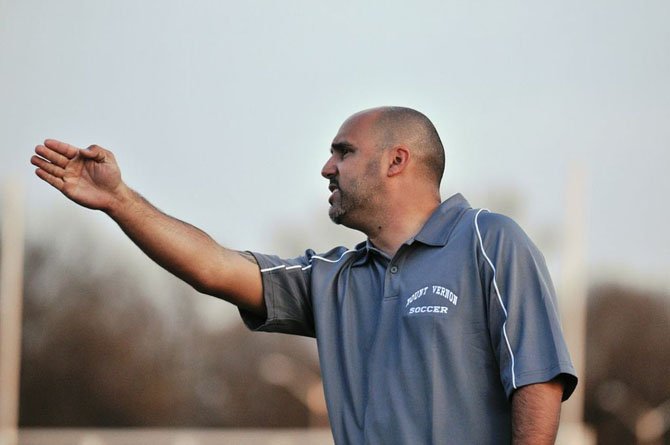 Tony Garza is in his first season as head coach of the Mount Vernon boys’ soccer program. Photo by Louise Krafft. 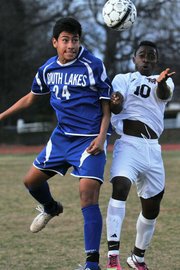 After five seasons with the Mount Vernon girls’ program, Garza took over the boys’ team after his twin brother, Robert Garza, left to be the boys’ head coach at Robinson. The Majors returned several talented players from last year’s team that finished 14-2-2 and lost to the eventual Northern Region champion Robinson Rams in a penalty-kick shootout in the region quarterfinals. Tony Garza said the Majors looked promising during a preseason scrimmage against the Rams, but that high level of play hasn’t carried into the regular season.

On Monday, South Lakes scored a goal in the 37th minute and Mount Vernon failed to answer. The Majors have two goals in four games.

The reasoning behind the slow starts?

“To tell you the truth, at the very beginning I thought it was because the boys were still riding the wave from last season,” Garza said. “I really did. I felt like they thought that because of last season, there’s still the core of the group here, they just felt, OK, we all know how to play together, we know what we’re doing, so we don’t need to do simple soccer.”

“[Tony Garza and Robert Garza] are really great coaches. It’s just the players, they talk big games, but when it comes to on the field, they’ve got to back it up and play with [their] heart. They’re looking for something to motivate them.”

Mount Vernon was scheduled to open the season against Chantilly. Weather postponed the contest against the Chargers and the Majors instead hosted T.C. Williams in the first game of the season. The defending Patriot District champion Titans, who are now 4-0, beat Mount Vernon 3-0. It was the Majors’ first loss in a home opener since 2009.

“We opened against TC [on a] very cold, bitter day,” Garza said. “[The] boys just weren’t ready. Too cold outside; they weren’t ready to play and that loss kind of set the tone for us. We lost our first game at home for the first time in three years and that really set the tempo and the boys, I don’t think they’ve recovered from it.” 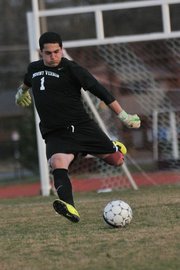 Garza also said the Majors are composed of talented individuals who aren’t playing well with one another. He said senior forward Simond Kargbo and senior midfielders Aldaid Rodriguez and Erik Rodriguez need to click on the field.

“We haven’t been functioning as a team from the beginning,” Kargbo said. “… We’re not clicking as a unit.”

Kargbo was a first-team All-Met selection by the Washington Post last season. He praised Tony Garza’s coaching abilities and said the players need to step up.

“[Tony Garza and Robert Garza] are really great coaches,” Kargbo said. “It’s just the players, they talk big games, but when it comes to on the field, they’ve got to back it up and play with [their] heart. They’re looking for something to motivate them.”

Tony Garza said the Majors were motivated to beat their former head coach during the preseason scrimmage against Robinson. The game ended in a 2-all tie, but Garza said similar effort would lead to future success.

“If we could play the way we played that day against Robinson, we'd be undefeated,” he said, “It was even better soccer than this team played last year.”

The Majors’ next opportunity to capture their first win under Tony Garza is a home game against Falls Church at 7 p.m. on Monday, April 15. Mount Vernon will travel to Yorktown on April 17 for a rematch of last year’s National District championship game.