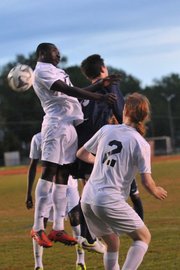 Mount Vernon junior Vandyke Gyau, left, leaps for a header during a May 5 match against Washington-Lee.

Lightning forced the Washington-Lee and Mount Vernon boys’ soccer teams off the field Monday for an hour-long delay.

When the Generals and Majors returned to action, one team came out ready to work, while the performance of the other group led to its head coach calling the team "lazy."

“We’ve actually battled this all season long,” said Mount Vernon head coach Tony Garza, who won the 2013 AAA state title in his first season with the program. “Since after the fourth game, it seems like, second half, the boys just come out like the game’s already over. They have no desire to finish playing the game. … We’re a very lazy team. I hate to be negative that way, but we’re a very lazy team. They’re still riding the high of last year’s state championship win, [but] that was last year, not this year.

“As you can see from today’s game, to every clear that we have, we are just basically jogging out while the other teams are forcing themselves out quickly, they’re quick to the ball [and] we’re just being reactive to everything. We’re just a lazy team right now.”

The game would eventually be called due to poor field conditions with 25:27 remaining in the second half, but not before the Generals scored a pair of goals. Play was originally suspended due to lightning with 23:15 remaining in the opening half and the teams locked in a scoreless tie. When play resumed, W-L took advantage of the wet grass field late in the first half as Nunez scored his team-leading 25th goal of the season off a Katz corner kick that came in low.

“We knew we had to put a couple goals in in case the game got cancelled,” Katz said, “so we came out, tried to win and won the district title.” 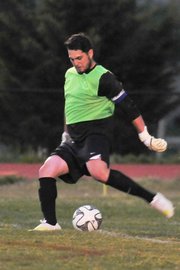 Mount Vernon goalkeeper Diego Castro kicks the ball during the Majors’ May 5 game against Washington-Lee.

The victory improved W-L’s overall record to 10-0-2. The Generals have outscored opponents 43-8 and have held the opposition scoreless in seven contests. Meanwhile, Mount Vernon’s record dropped to 2-4-4. After a 1-0-3 start, the Majors 1-4-1 over their last six games.

“The biggest thing is that the team chemistry is not there,” Garza said. “It’s too much individual work out there. … The biggest thing, honestly, that’s on their mind is they like to hear their names being called from the stands from the girls and that’s the problem that we’re having right now, is too much ego.”

It hasn’t all been bad for the Majors. Garza praised the play of freshman midfielder Christian Osorio, who has played for the D.C. United Academy. Osorio’s first action for the Majors was April 8 against South Lakes, Mount Vernon’s third game of the season.

“The boy’s fantastic,” Garza said. “… He’s a great distributor, he has great field vision, [his] foot skill is really good, too, when he’s on [his] game, but he gets pretty frustrated when other people aren’t moving to the ball. He does a lot of work and puts the ball on stride for people, but when people aren’t making runs for him, he gets a little frustrated.”

Last season, Mount Vernon started 3-7-1 before winning 11 of its final 12 games and capturing the AAA state title. With the postseason approaching, Garza is hoping the Majors, who now compete in Group 5A, can turn things around and make a run.

The Majors will travel to face Stuart at 7 p.m. on Thursday, May 8.