Eighth grader among 10 finalists chosen to compete for the state title. 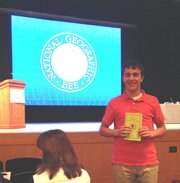 Nicolas Ruiz of Vienna, an eighth grade student at Trinity School at Meadow View (TSMV) in Falls Church, was one of 10 finalists who competed on Friday, April 5, in Farmville, Va. for the opportunity to represent Virginia in the National Geographic Bee. After Ruiz won his school title he, along with other winners across the state, took a written exam from the National Geographic Society to determine the top 100 students who would be invited to the state competition. For the second year in a row, Ruiz was part of the top 100 scorers on the state written exam and was invited to the state tournament. These top 100 scorers, representing students from schools and home school associations in Virginia, were in fourth through eighth grade and not older than 14.

"My goal this year was to be one of the 10 finalists," says Ruiz, "I was especially proud of surviving the tie-breaker round and achieving my goal of being among the final 10."

The winner from the state competition, Akhil Rekulapelli, a seventh grader from Stone Hill Middle School in Ashburn, will go on to the national contest May 20-22 in Washington, D.C. Winners of the National Geographic Bee receive scholarships for $25,000, $15,000 and $10,000.

Trinity School at Meadow View in Falls Church, Va., is a co-ed, ecumenical school serving students in grades seven through 12.