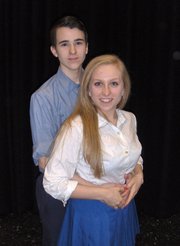 Westfield High’s new show, “Urinetown: The Musical,” is about a future time when a severe water shortage forces citizens to pay to pee. And, no pun intended, Director Susie Pike says her actors are “rarin’ to go.”

“They enjoy doing something different and contemporary, and they’re bringing a lot of energy to it,” she said. “They’re really talented kids; I couldn’t ask for a better cast. The audience will like the detailed choreography, tremendous voices and great characterizations from the actors.”

There’s a cast and crew of 55; school Choral Director Katie Pierce is the show’s vocal director and conductor of the 20-piece orchestra. Said Pike: “I love musicals because they bring together so many elements of art — singing, dancing, instrumentals, painting, designing and acting.”

The outside scenes will have different textures, such as brick and chain link, and tunnels and sewers will provide an industrial look. And, said Pike, “We have a bridge and two staircases to make the set multi-level, which is really neat for staging and choreography.”

“There are about 17 songs, and I did the movement and blocking for all of them,” she said. “And as assistant director, I’m able to make the changes between the scenes and songs seamless. It’s lots of work and an incredible amount of responsibility.”

Toughest, said Mitchell, are the many numbers where the whole cast is on stage, but doing different movements. So, she said, “It takes a lot of organization and planning at home to work it out. But we have a strong ensemble of dancers and singers and they’re doing a great job. And since I’ve had a vision of what I wanted for the show for so long, it’s wonderful to see it finally coming together.”

Playing the rich Mrs. Millennium is senior Shannon Douglass. “She’s on the staff of Urine Good Company, which controls the water consumption and takes poor people’s money so they can pee,” said Douglass. They’re not allowed to do it at home, anymore, only in public amenities. “She’s snooty and just looks out for herself, but it’s fun,” said Douglass. “I like the numbers she’s in and it’s nice to play someone more upper class than my previous roles.”

Her favorite song is “Mr. Cladwell” because “it’s showy and upbeat and has classic, Broadway-style moves.” Douglass said the audience will like the show’s “unique humor, and the actors’ performances will really capture them.”

Junior Selena Clyne-Galindo portrays Penelope Pennywise, who works for the big boss, Mr. Cladwell, and runs Public Amenity No. 9. “She’s tired, but sassy, and doesn’t put up with people’s complaining,” said Clyne-Galindo. “I can relate to her personality, so it’s a comfortable role for me.”

She especially likes the song, “Privilege to Pee,” which she sings, because “it really shows Penelope’s true character and it’s vocally challenging to sing, but fun. It’s a funny musical and I think people will get a good laugh and really enjoy themselves.”

Playing Cladwell’s daughter Hope is senior Sarah Schweit. “She’s a little bit of an airhead, but not stupid; and she’s dynamic and mature by the end of the show,” said Schweit. “It’s a blast to play the bubbly ingénue.”

She likes the song, “Why did I Listen to That Man?” sung by the leads because “the harmonies and countermelodies intertwine and create this awesome tapestry.” Calling the show “a parody of a ton of popular, Broadway musicals,” Schweit said it’s appealing because “every character has their own style of humor, ranging from satire to slapstick.”

Junior Julian Sanchez plays Bobby Strong, who leads the citizen uprising against Cladwell’s empire. “He’s a brave, independent thinker motivated to stop the injustice in Urinetown,” said Sanchez. “It’s a role I always wanted to play because I love all his songs and he’s such a heroic character. And I’ve always wanted to lead a show at Westfield, and now that’s being fulfilled.”

His favorite song is “Run, Freedom, Run” because “it’s a show-stopping number in which I lift the spirits of the downtrodden people.” Sanchez also noted that this show will raise environmental discussions afterward about “how much water we use and our carbon footprint.”

Portraying Officer Lockstock is twin brother Brandon Sanchez. “He’s both the narrator and police officer in the city,” said Sanchez. “He’s also Cladwell’s right-hand man and enforces the city’s strict, no-peeing law. He’s dedicated to his work and takes a little too much pride in oppressing the poor. But as the narrator interacting with the audience, he’s very likable.”

Enjoying his role, Sanchez said, “It’s the first time I’ve gotten to break the fourth wall. And Lockstock’s manly and an original character; I think he’s the funniest one.”

He likes “Cop Song,” which he and the other policeman, played by T.J. Vinsavich, perform with others, telling how they love catching lawbreakers and taking them to Urinetown. Overall, said Sanchez, “It’s a mix between a funny show and one with a message — to keep authority in check so it won’t have a dominating presence over society.”