Teacher of the Year
Votes

Teacher of the Year 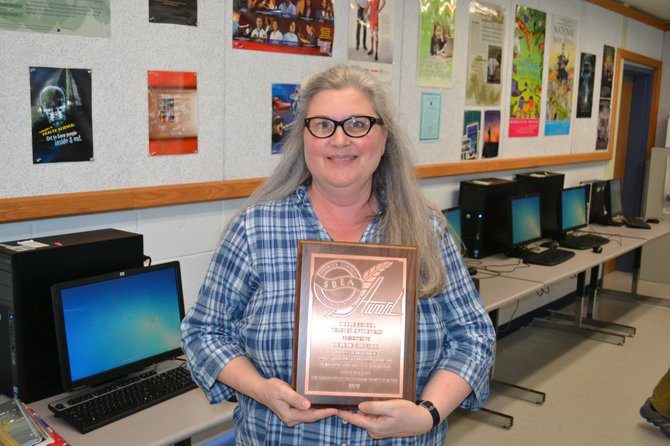 Search the faces of Helene Safford’s students, and you won’t find one look of boredom. No signs of restlessness or clock-watching either. In fact, the expressions on the seventh and eighth graders’ faces in Safford’s speech arts class portray nothing but enthusiasm. On a recent Monday afternoon, the computer-lined classroom featured students milling about, and the noise level was high. But Safford wouldn’t have it any other way. The students were working in groups, consulting with their peers and with Safford on a broadcasting technology project.

“You don’t do any of the teaching particularly for the recognition, but it’s really nice when someone does see the types of things you’ve done and what your students have produced.”

Safford has been a career and technical education teacher at Longfellow Middle School for three years. This self-proclaimed “techno-geek” is well respected, not just by her students, but also by the school’s administration, and by educators at the state level. This month, her work has been recognized by an even broader organization.

Helene Safford believes that an informal approach works best in her technology class.

In mid-April, the Southern Business Education Association presented Safford with the 2012 Middle School Teacher of the Year Award. “I was really excited,” said Safford. “It’s a great honor to be recognized. You don’t do any of the teaching particularly for the recognition, but it’s really nice when someone does see the types of things you’ve done and what your students have produced.”

Safford, who initially planned to be a teacher, took a slightly non-traditional path to her current position. During her teacher training in the 1970s, she discovered a love of technology. Before long she had invested 20 years in the corporate world running technical operations for Reuters. Her interest in technology and business, combined with a propensity for art, eventually led her to open the Clay Café, which just celebrated its 15th anniversary in Falls Church. Though her staff runs it, Safford still owns Clay Café. Her diverse background has allowed her to share a wealth of business and technology experience with Longfellow middle-schoolers.

“I think it’s really great that she won this award,” said Longfellow eighth grader, Avery Madore. “She really knows all the technology and what to do with it. I’m very happy for her,” he said.

Helene Safford believes that her students work best in an informal setting on group projects. Her class produces the school’s news show.

Safford says she gets as much from her students as they get from her. “I love the enthusiasm,” she said. “I just get a lot of energy from the students. I could be having a terrible day and walk in, and within 10 seconds I’m just so engrossed in the atmosphere and working with the students. I like to see them excited about technology and their achievements. It’s very energizing. I love it so much.”

Longfellow Middle School recognizes her love of teaching. “She’s very deserving of the award,” said Assistant Principal Wendy Eaton. “She does phenomenal work with the students in the classroom. She really does an excellent job.”