From Joy to Terror
Votes

From Joy to Terror 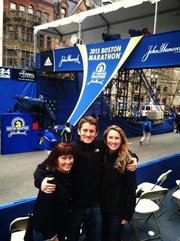 From left, Carol Byrne, Mike Cerney and Kayley Byrne at this year’s Boston Marathon. Carol Byrne finished the race approximately seven minutes before explosions went off at the finish line.

After four hours and two minutes of constant exertion, Carol Byrne of Oak Hill finally felt relief. She crossed the finish line of the 2013 Boston Marathon, the eighth marathon she has run, and let herself relax.

“When you finish something like that, you’re just so happy to not be moving your legs anymore, but you’re spent,” she said.

“When the explosions went off, I could tell right away that it was something bad, and it just became chaos,” she said. “People were running away in a panic.”

Byrne was supposed to meet her daughter and her daughter’s boyfriend, who had finished the race about 45 minutes previously, and for a few scary minutes, she didn’t know where to find them.

“She’ll often wait for me right at the finish line, but thank goodness she had decided to make her way to the family area,” Byrne said. “I had my phone strapped to my arm, and I tried calling Mike, her boyfriend, but it took so long to get a call through.”

Once Byrne was able to get through, it took her an hour to reconnect with her group.

“We sort of walked around for about half an hour, let people use our phones, and then we made sort of a bad decision,” she said. “Mike decided to try and find our bags we had left behind, and soon after he left we all heard that the explosions were pretty clearly two bombs, and then we didn’t know what could happen.”

The group eventually returned to their hotel and were able to keep their original plans of leaving Boston Tuesday afternoon. They turned in photos and Byrne even called the tip line to tell them about someone she had witnessed running away from a tree with a backpack.

They found themselves glued to the TV throughout the week, all the while coming to grips with what they had been through.

“We started to focus on questions such as why would someone do this?” Byrne said. “It’s such a joyful event, such a community spirit, such positivity all around.”

Byrne said that this year’s Boston Marathon was originally going to be her last, but said after a few days, she found herself talking with her daughter about next year.

“It’s so much work and training to get ready for a marathon, and we had said this one would be our last. But when we saw the suspect caught Friday night, I started thinking, ‘We can’t let these guys control us, to scare us away from something so wonderful,’” she said. “We have so many great memories, whether it’s the girls from Wellesley blowing kisses, or the families gathered together to hand out oranges to the runners, we don’t want our last memory to be of this horrible event.”