South Lakes Takes on the 80s

South Lakes High School opened up its production of “Xanadu” Thursday, April 25, with the first of six shows dedicated to the 1980s nostalgia musical. For Terri Goldberg of Reston, it brought out memories of times past.

Sonny, played by Ben Peter, and Kira, played by Natalie Pernick, are subject to the machinations of Melpomene and Calliope, played by Michelle and Helen Silvinski in South Lakes High School’s production of “Xanadu.”

“My daughters looked at it the same way they look at ‘Grease,’ a story about people who live in a completely different time. But I was alive for the 80s, and I might have had a pair of legwarmers, so it made me feel a little old,” she said. “They kept nudging me during the play, ‘what’s a roller disco?’ ‘Why would a character want to have an Australian accent?’ I had a lot of explaining to do.”

“Xanadu” tells the story of Sonny, played by Ben Peter, a down-on-his-luck artist who meets, Kira, played by Natalie Pernick, a Greek muse who inspires him. She dons leg warmers, roller skates and the accent to keep herself disguised as they work to turn an old theater into the perfect combination of athletics and art: a roller disco. 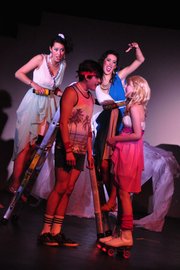 Sonny, played by Ben Peter, and Kira, played by Natalie Pernick, are subject to the machinations of Melpomene and Calliope, played by Michelle and Helen Silvinski in South Lakes High School’s production of “Xanadu.”

“If you didn’t know anything about the 80s, it would be easy to believe the play takes place in some faraway fantasy land with the getups they had on,” said Sarah Grant, a South Lakes graduate now attending George Mason University. “Visually it was a striking play, the costumes, the lighting, the way the songs were choreographed around the set, it’s clear a lot of hard work went into the production.”

Throughout the play, Kira and Sonny must survive the machinations of Kira’s older sisters, greedy real estate developers, and even the Greek gods themselves to achieve their goal, all while maintaining a light tone.

“The students, particularly Sonny, were very funny with their dialogue and timing, something you wouldn’t necessarily expect with ‘Xanadu,’” said Scott Klein of Sterling, who came to see some friends in the play. “Instead of just relying on laughs related to the ridiculous clothes, which they did get, they also had a great delivery with the lines, which got some big laughs from the crowd, me included.” 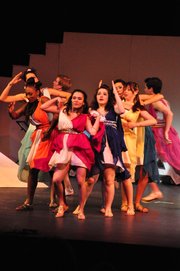 The Muses perform a dance during South Lakes High School’s production of “Xanadu.”

While the acting, singing and choreography impressed many in the crowd, Maggie Hernandez of Reston was impressed by something else entirely.

“I can’t believe how much they had to do while wearing the old school kind of roller skates,” she said. “To stay on their feet at all is very impressive.”