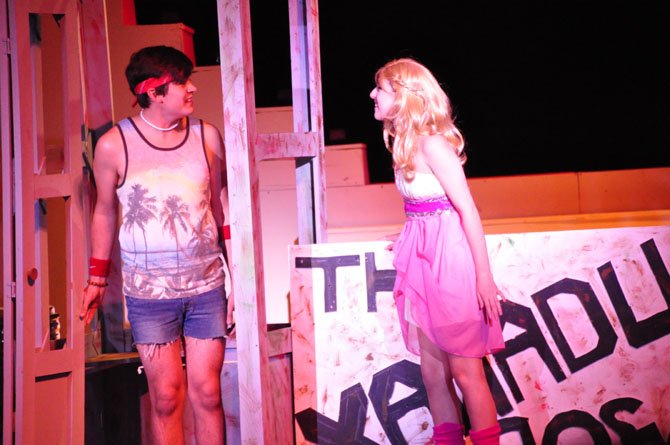 What do you get when you cross an 80s roller disco with ancient Greek muses? South Lakes High School’s recent production of the disco-ball filled, 80s inspired “Xanadu,” of course.

Produced first as an initial-flop of a movie, “Xanadu” went on to gain a cult following and inspired the musical of the same name. “Xanadu” was penned by Douglas Carter Beane with music and lyrics by Jeff Lynne and John Farrar, and to contrast the movie, opened on Broadway in 2007 to rave reviews. The musical is set in Venice Beach, where Greek muse Clio (Under disguise as “Kira”), forbiddingly falls in love with a mortal, Sonny. Kira helps Sonny to open up the roller disco of his dreams, but as news of the romance reaches Mount Olympus, the fate of Kira comes into question.

Opening the show with his charming humor was chalk-artist Sonny Malone (Ben Peter). Peter brought an endearing quirkiness to his role that carried the production, and delivered all of his hilarious one-liners with ease. Peter’s smooth, rich vocals blended seamlessly with his romantic interest, Kira (Natalie Pernick). Pernick’s ability to connect well with Peter extended to every other cast member, as she had specific and defined relationships with each of them. Her portrayal of the disguised muse was full of charisma, and her presence onstage always picked up some slow-paced moments. The two romantic leads carried the fun-filled production with life, and provided many of the show’s laughs.

While the leads were commendable, the production’s ensemble of muses was particularly hilarious, and proved to be a highlight of the show. Each Greek muse had a characterization distinct from the rest of the group, and yet they managed to work extremely cohesively. Some group harmonies were sometimes spotty, but the ensemble found great comedy in their spoken lines and movement. While some actors didn’t seem fully committed to their zany characters, the ensemble of muses never disappointed.

With a show as unique as “Xanadu,” South Lakes technical departments did not disappoint. The initially bare, two-level set was decorated with colorful walls and sparkling lights that created a dazzling stage picture at the end of Act I. Lighting was executed flawlessly, with creative angles and two spotlights utilized in the musical’s entirety. Costumes, which were altered exclusively by students, provided a needed splash of color to the originally white stage. While sometimes the actors got off track in musical numbers, the orchestra covered and provided a solid, near-perfect accompaniment.

The collision of Greek mythology and 80s disco, a cast on roller-skates, countless disco balls, and a pegasus, all topped off with a giant light-up sign reading “XANADU.” South Lakes High School’s production of the 1980 cult classic film filled the stage with funky, bright colors and a quirky charm.