‘We Are the World’ at Dranesville Elementary
Votes

‘We Are the World’ at Dranesville Elementary 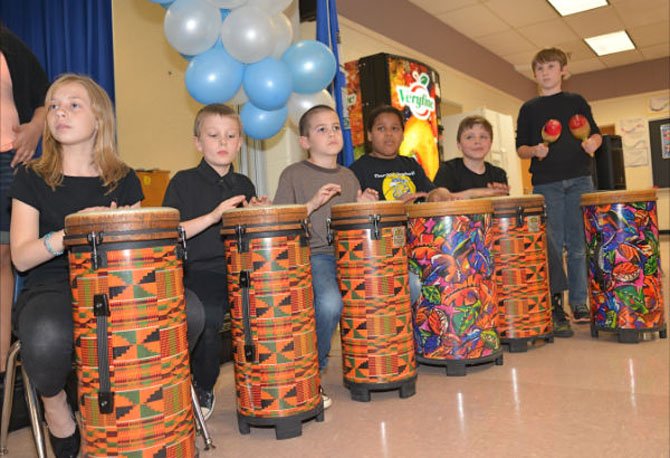 Keeping the beat—the Dranesville Drumming Dragons provide the tempo for the chorus as they perform the South African hymn, “Siyahamba.” Andrea Worker

For the 11th time, the halls were alive with the sound of music at Dranesville Elementary’s International Night Program on Friday, April 26, from 7 until after 9 p.m. The cafeteria was entertainment central. After Principal Kathy Manoatl got things started, the evening began with five first grade classes delighting the assembly with their individual performances of songs from Russia, Latin America, Germany, Indonesia and France. Music teacher Brian Klippel, who also directed the tuneful productions, admitted to a few moments of concern, especially during the opening number, “Sasha,” by Mrs. Devine’s class.

With an Olympic-style “Parade of Nations” representing the more than 20 different nationalities to be found among the student population, the children took to the stage with their country’s flag, with many in traditional garb from their lands.

The singing was accompanied by some energetic, arm-in-arm swinging Russian folkdance moves. “The boys really got into it,” laughed Klippel. “I pictured one or two of them flying off the stage. I kept telling them ‘easy, guys!’” The Dranesville Chorus and Drumming Dragons rounded out the musical selection with a rousing rendition of “Siyahamba,” a South African hymn whose title translates as “We Are Marching” in the Zulu language.

A “PARADE OF NATIONS” then circled the room, led by ESOL teacher Jennifer Valbuena. Flags from more than 20 nations, representing the native lands or heritage of Dranesville students, were carried in by the children, many attired in the native dress of the country they represented. As each child came to the stage, Principal Manoatl had them announce the country represented.

Obviously a few of these young ambassadors were a bit nervous about discharging such an important duty. When asked to name her country, one lovely miss loudly responded, “Herndon!” before correcting herself with some gentle encouragement from Manoatl.

International music wasn’t the only thing on the evening’s packed program. There was plenty of dancing as well. The Herndon-based Cardinal Cloggers entertained with several numbers. Cloggers may be best known for their performances of more traditional dances, but this group came prepared with a selection that had even the youngest audience members clapping, swaying and singing right along—especially when they were called up to join in the famous “Chicken Dance.”

Even the audience barely had time to catch their own breaths after the cloggers’ excitations, when the stage was claimed by House of Angklung’s (HoA) interactive Indonesian angklung performance. According to HoA’s website, the angklung is an “instrument made from the joints of a piece of bamboo.” It’s played by the shaking and swaying of the hand that holds it. This performance, too, had the crowd’s attention. A few of the children could be heard turning to a mom or dad with “I want one of those!” Before the live entertainment portion of the program came to a close, there were also dances from India, Guatemala and Bolivia.

Sisters Alexandra and Sofia of Herndon take a break from their duties as representatives of Moldova. Alexandra attends Dranesville as a first grader. Sofia is ready to follow her big sister to school next year.

It’s a good thing that visitors were provided with a map of the school facilities. Although most of the performances took place in the school’s cafeteria, without that helpful guide guests might have missed out on displays from countries set up in the gym—something the children would not want to do as there was a passport contest afoot, with stamps distributed at each country’s table visited. The tables were manned by teachers and family members, again, mostly wearing the traditional garb of the represented country, and standing by to talk about the items on display. There was a hands-on craft area, “Curiosity Cove,” culinary delights available in the aptly named “Taste of The World” exhibit, and Librarian Holly Conroy offered sessions of “World Tales,” story telling in her domain. 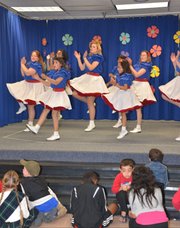 The Cardinal Cloggers were a big hit, performing tunes the children all recognized and could sing along with, including their own version of “Gangnam Style.”

IN JUST TWO HOURS on a Friday night, the Dranesville Elementary students, staff and volunteers really did take their guests on a whirlwind tour around the world, opening their eyes to the sights, sounds and tastes from the daily lives of many of our neighbors on the planet, and sharing a look into the cultures of much of the student population. Kudos to Parent Liaison Tania Bove, the army of staff and volunteers she marshaled over the last three months, and to the students of Dranesville Elementary.