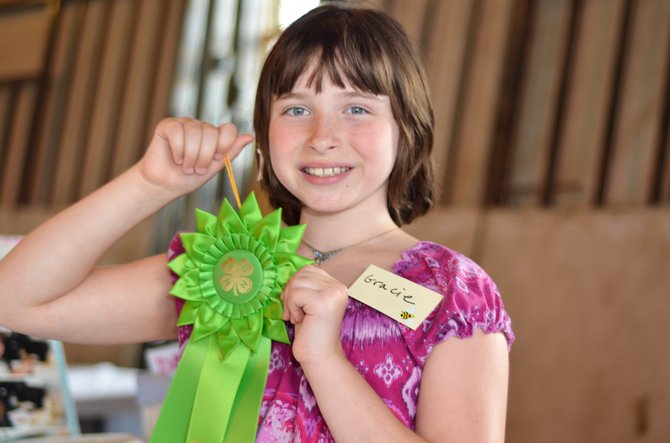 Johnson has been managing the Frying Pan Farm Park in Herndon for 24 years. Although Saturday, Aug. 3 was overcast, events continued as planned: At an official opening ceremony the king and queen of the 2013 4-H Fair were announced. Connor Tweddle of Vienna was crowned king of the 4-H Fair. Rachel Stephenson, resident of Chantilly, was crowned queen of the 4-H Fair. “I am definitely interested in the animal sciences and biology,” said Stephenson. “I have only been in one 4-H club, and I have been president for four years. The 4-H has taught me about patience, leadership and responsibility.”

Lenah Nguyen, the 4-H extension agent, assisted in preparing the fair events at Frying Pan Park. “We usually get about 10,000 visitors in the weekend. This park is a gem to the community,” said Nguyen. Fairfax County is home to 26 4-H clubs, which includes eight community clubs, 12 project clubs, and five Cloverbud clubs.

Rising third grader Gracie Meade won first place in the Honey Bee and Apiary Products competition with her home baked honey granola bars. “My mom signed me up, and she is going to be so happy,” said Gracie. Gracie joined her local 4-H club after a visit to last year’s 4-H Fair. “We came to the 4-H Fair last fall, and Gracie loves animals, it was a natural fit,” said her father, Bill Meade.

Amy Jenkins, a 4-H club member and 10th grader at Robinson High School, entered her rabbit Honeysuckle into the rabbit show. A Jersey wooly rabbit, Honeysuckle won Best in Show award. “It takes a lot of grooming,” said Jenkins. “I had some of my rabbits compete at other shows previously. In December I will at the rabbit show in Richmond.”

Also at the event was Mason Maddox Jr., the official miller at Colvin Run Mill Park. “We are running a 1920’s Williams mill on a 1946 Model A Tractor. This is a portable device and we take it out to show to promote the technology we have at Colvin Run Mill Park,” said Maddox. Blacksmiths Fay LeCompte and Pat McGuire, both members of the Blacksmiths’ Guild of Potomac Inc., came to demonstrate the blacksmithing craft at the forge.

Frying Pan Farm Park is the host site for three different 4-H clubs. Each club encourages anyone between the ages of 9 and 19 to get involved. The Hoofers & Heifers Livestock Club provides a unique opportunity for youth to learn about farm animals such as pigs, sheep, cows and goats. The Herndon Horse 4-H Club is a club dedicated to all farm animals with a major focus on horses. Krazy for K9s 4-H Dog Training Club is open to youths interested in strengthening the bond with their dogs and learning about dog sports.

To learn about the local 4-H Clubs in Fairfax County, visit http://4hfairfax.blogspot.com/.