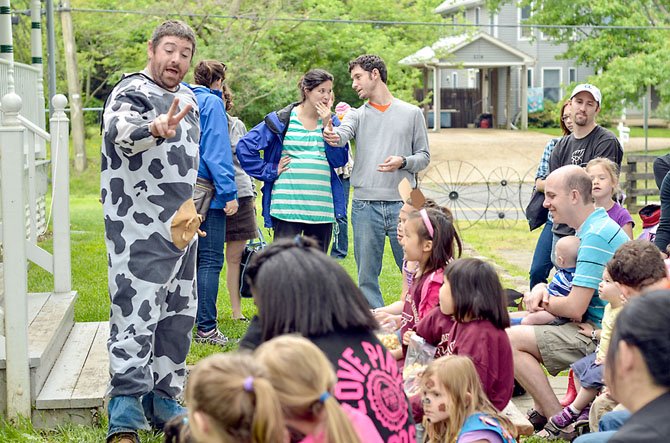 Spring Farm Day was held at Frying Pan Farm Park in Herndon from 10 a.m.-3 p.m. on Saturday, May 11, and although the weather was overcast, the event was well attended. 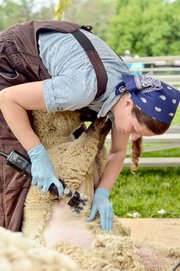 “Spring Farm Day was started about 15 years ago,” said Park Manager Paul Nicholson. “It used to be divided into sheep and wool day, and then dairy day, but we combined it so the second Friday of every May is Spring Day at Frying Pan Park. It all revolves around the sheep shearing. We turned it into a public event and added different activities,” said Nicholson.

These activities at this year’s event included the cow milking, children’s art and craft booths, pony rides, displays of the Frying Pan beehive and other local demonstrators. 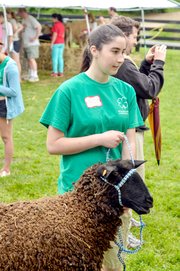 4-H Club member Kayla Blatman with a sheep that will be sheared at Spring Farm Day, held at Frying Pan Farm Park on Saturday, May 11.

Local blacksmiths Kipp Coddington and Rick Johnson attended the event and were working at the blacksmith shop forge. Joseph Moffet and his son Henry operated the Moffet Blacksmith Shop in downtown Herndon from 1904 to 1955. “The shop was moved to Frying Pan Farm Park in 1975 and contains much of the blacksmith's original equipment,” said Johnson.

During the event, certified sheep shearer Rachel Summers shaved more than 11 sheep. “I used to come to Frying Pan Park as a child,” said Summers. She has been shearing since 2006 and studied animal husbandry. She is currently working with Crowfoot Farm. “We always have someone come shear the sheep for us,” said 4-H Club member Kayla Blatman.

Hoofers and Heifers is Frying Pan's very own 4-H livestock club. They were very involved in helping Frying Pan Park staff and visitors enjoy the event. The 4-H Club assisted at both the sheep shearing and the cow milking.

Volunteer and beekeeper John Fraser brought out a hive of bees for display.

The Stabler-Leadbeater Apothecary Museum in Alexandria had a display near some other local visitors. Site Manager Lauren Gleason showed some herbs farmers may have grown and used. “If the farmers could not heal or cure their illness with herbs, the next stop would be to visit an apothecary store, and then maybe a doctor,” said Gleason. 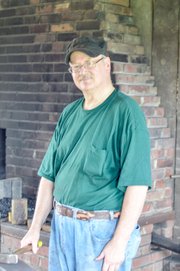 “It’s a fun day, lot of kids and lots of questions about bees and how they make honey,” said Frying Pan Park volunteer and beekeeper John Fraser. Steve Golobic, a park employee at nearby Colvin Run Mill Park, assisted at the children’s puppet show near the Farm House. Children enjoyed playing in the popular corn sandbox. “I was a little worried about the weather but the turnout had been good,” said Nancy Saunder, park employee and historian’s assistant.

To learn about the 4H program visit: