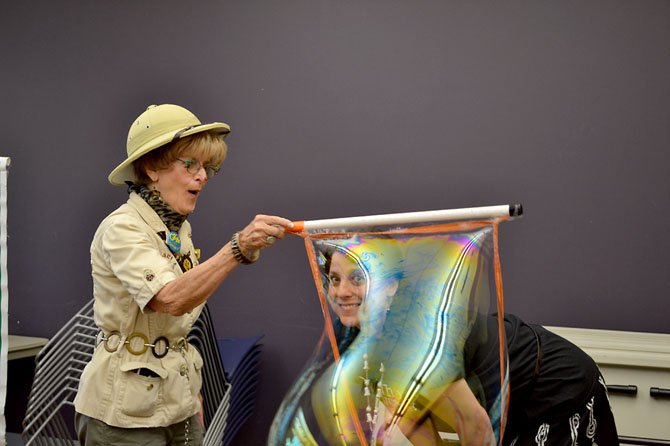 Safari Bingo creates a gigantic bubble around the head of a librarian at a children’s event at Burke Centre Library in June 2013. The library was scheduled to be one of two libraries tested with a reorganization plan on Sept. 1. That plan has been put on hold after criticism from library volunteers, staff and patrons. Photo by Victoria Ross.

CORRECTION: This story has been modified to reflect two corrections. 1) A quote from Charles Keener was incorrectly attributed to Jennifer McCullough. 2) Several paragraphs concerning a Reston Library volunteer have been deleted due to confusion about source information. 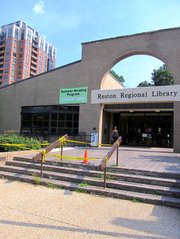 In a world where the Internet has replaced newsprint, e-books have supplanted paperbacks, and the latest films stream directly to your laptop, how do public libraries compete?

Like almost every other institution, public libraries are adapting. Self-check-out, online renewal and computer catalogues have replaced the fusty file drawers of index cards and leather-bound periodicals of the past.

"I think changes [need] to be made to the way libraries operate—to accommodate ways people get their information, do research and use libraries as community centers," said Sharon Bulova, Fairfax County Board of Supervisors chairman, on Monday. She cautioned that any change, however, "needs to be done with the engagement of our staff and the community."

But the changes proposed by the Fairfax County Public Library administration—which include reduced staffing and cross-training staff members—have sparked outrage among library volunteers, staff and patrons who call the plan "misguided," and a "radical reinvention" of the library system.

Criticism of the plan has been building since July, when Library Director Sam Clay unveiled a program that would test a new organization model this fall at the Burke Centre Library and the Reston Regional Library, the busiest library branch in the county. The reorganization, Clay has said, streamlines staffing while retaining a high level of service.

"It includes a one-desk model of customer service, with cross-trained staff answering account and information questions, and increased programming conducted within the branch as well as in the community," Clay said.

In response to questions and criticism of the reorganization, Clay and his staff prepared a list of Frequently Asked Questions (FAQ). In the document, Clay said there are multiple factors driving these changes.

"The way customers use the library has been changing over time; technology is having a major impact on library customers and staff with 76 percent of customers now checking out their own materials. The county is still undergoing a budget crunch, and the library is required to reduce its annual budget," according to the FAQ document.

"Libraries in general are at a pivotal crossroads as we are called upon to meet the changing needs of our customers, brought on by technology and the Internet while providing resources with shrinking tax dollars. Libraries all across the country are trying new ways of operating," Clay stated in the document.

Braddock Supervisor John Cook, who met with library supporters, said Fairfax County Public Libraries are facing the reality of budget restrictions and "are adjusting to the fact that with the Internet and electronic books, libraries are changing … "

But critics of the plan maintain that the "sweeping changes" proposed by the library board will have "disastrous effects on the quality of library service that Fairfax county residents expect and deserve."

"The patron does value time as a resource, and they do want to be able to access books in a speedy way, but my experience tells me that they also highly value the expertise and knowledge of the librarian to aid them in their exploration of the library and all it has to offer … " —Daniela Dixon, branch manager of the Great Falls Library

On Aug. 3, a group called "Friends of the Library" launched an online petition urging the Library Board of Trustees to halt the reorganization plans and reevaluate the changes. The petition states:

"For the good of the community, this plan must be re-evaluated with thorough input from those who will be affected by the changes. This petition serves as a chance for library patrons, staff and friends to make their voices heard." By Monday morning, Aug. 19, nearly 900 people had signed the petition.

"The lack of input, transparency and respect is the greatest fatal flaw in the whole plan. … This entire plan is hugely unpopular with staff, volunteers and patrons," said Charles Keener of Oakton, an information assistant at Tysons-Pimmit Regional Library who has worked in the library system for nearly 40 years.

One widely criticized proposal in the reorganization: lowering the educational standards for librarians. Instead of requiring a master’s degree of library science for librarians, the job description will say that the advanced degree is "preferred," but not "required." Clay has said the change will allow more flexibility in hiring.

Keener counters it will "downgrade" the library and take the "librarian out of the library."

Scott Railton of Great Falls, a long-time library patron who contacted the Connection on Monday, agrees.

"Who would believe you can replace professionals with untrained clerks and retain quality? Current advancements in technology simply will not suffice to replace libraries and professional librarians," Railton said.

"We are concerned that the drive to economize in this way will not serve the library, the county or the public in the long run," said Jennifer McCullough, president of the Fairfax County Public Library Employees Association, who addressed the Library Board at its June 2 meeting. "Will a library system that does not require any librarians on staff flourish, or will librarians prefer employment in localities that still find an MLS degree necessary?"

At the same June 2 meeting, Daniela Dixon, branch manager of the Great Falls Library, acknowledged the county has an obligation to spend tax dollars efficiently, but was concerned that "we might be ‘throwing the baby out with the bath water.’"

"Yes, we need to use our staff resources more efficiently, but we have an obligation to society to not destroy the cultural institution that is the library while doing that," Dixon said. "The patron does value time as a resource, and they do want to be able to access books in a speedy way, but my experience tells me that they also highly value the expertise and knowledge of the librarian to aid them in their exploration of the library and all it has to offer. … We are a unique agency in the county, because we are a cultural institution, an educational institution, and [an] institution that changes lives every day."

Library staff and volunteers have been meeting with Fairfax County supervisors—who appoint the 12 volunteer members of the Library Board of Trustees—urging them to hold off on tests and hold public hearings on the proposed changes.

"We are moving heaven and earth to delay this," Keener said. "I have never seen lower morale or greater anxiety, fear, discouragement and anger from our staff. … We want people to contact the library board and to contact their supervisor. Tell everybody breathing what’s happening at the library."

The Board of Supervisors has heard the message loud and clear, according to several Fairfax County officials

It’s likely the board will consider a motion at its Sept. 10 meeting, the day before the library board's monthly meeting on Sept. 11, requesting further community outreach through public hearings or other forums.