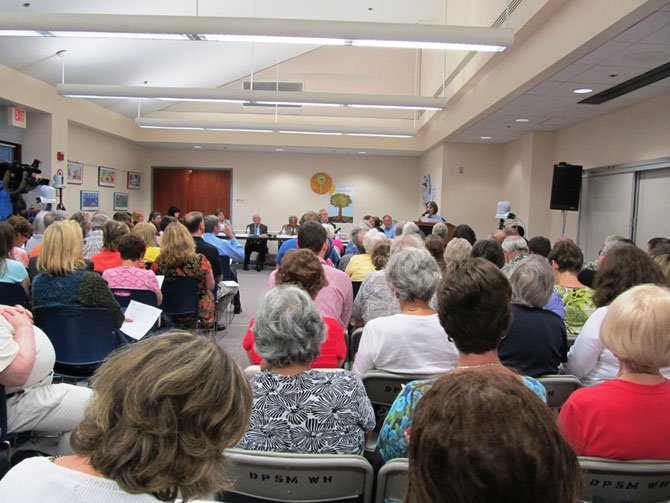 Tresa Schlecht, a member of the Board of the Friends of Tysons-Pimmit Regional Library, was one of five public speakers during the Sept. 11 Fairfax County Library Board of Trustees meeting held at George Mason Regional Library in Annandale. She criticized the library’s process for discarding books and urged board members to reconsider the “beta” plan. Photo by Victoria Ross.

“Libraries are sacred space. Books are sacred vehicles that transmit our culture. … You are the trustees of the library. You have a sacred trust to protect the libraries for the people of Fairfax County.” —Kathy Kaplan, a Reston resident and member of the Fairfax County Federation of Citizens Associations. 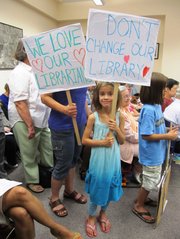 The Clements family of Fairfax held up signs protesting proposed “beta” changes during the Sept. 11 Fairfax County Library Board of Trustees meeting held at George Mason Regional Library in Annandale. More than 250 critics of the plan attended the meeting.

On Wall Street, a “beta” test refers to assessing the risk, volatility and expected return of a particular portfolio.

If Fairfax County Public Library (FCPL) officials had a crystal ball to assess the volatility of its planned beta tests this fall, it’s likely they may have steered clear of the project that became a quagmire of epic proportions.

“Yes, absolutely, this is the worst PR nightmare,” said Library Director Sam Clay, in an interview with The Connection Tuesday, Sept. 10. “I’ve been amazed at the power of social media, and the inaccuracies in all the blogs, emails and reporting. There’s no one magic button to press to correct all the inaccuracies.”

There may not be a magic button, but Library Board Chair Willard O. Jasper spoke the magic words that more than 250 critics of the plan turned out to hear during the Library’s Board of Trustees meeting on Sept. 11 at the George Mason Regional Library in Annandale.

Jasper announced that the library board had voted to immediately halt the beta tests until the board could schedule more outreach and communication opportunities for employees and patrons. The crowd, which spilled out into a hallway where they could watch the proceedings on a video monitor, applauded as the board approved Jasper’s motion to suspend consideration of the plan, a motion submitted by library Director Sam Clay.

“This is a new beginning for us,” Clay said after the two-hour meeting. “This is an opportunity to get more feedback and people involved in the process.”

Karrie Delaney, the Sully District appointee to the Library Board of Trustees, acknowledged “challenges ahead,” but added that it was “great to see people so engaged and to know that our public libraries are treasured. … With the support of our community, and the expertise of our library staff and administration, I believe we can build and sustain an exceptional library system that serves all the people of Fairfax County." Delaney has already planned a series of public town hall forums at Centerville and Chantilly libraries in October. 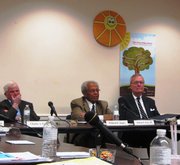 SEVERAL MEMBERS OF THE PUBLIC spoke briefly before the board’s vote, imploring board members to put the beta plan on hold.

“Libraries are sacred space. Books are sacred vehicles that transmit our culture,” said Kathy Kaplan, a longtime Reston resident and member of the Fairfax County Federation of Citizens Associations. “You are the trustees of the library. You have a sacred trust to protect the libraries for the people of Fairfax County,” Kaplan said to applause from the audience.

Criticism of the beta plan had been building since July, when Clay unveiled a program that would test a new organization model at the Burke Centre Library and the Reston Regional Library, the busiest library branch in the county. The reorganization, Clay said, streamlined staffing and eliminated redundancies while retaining a high level of service.

But the plan, which include reduced staffing, cross-training staff members and lowering the education requirements for librarians sparked outrage among library volunteers, staff and patrons who call the plan “disastrous,” “a library meltdown” and “the end of our libraries as we know it.”

Clay said he was taken aback by the tone and tenor of the criticism.

“Everyone has difficulty with change. When all is said and done, when you have been in a job for a while, change is quite rightly a concern. I understand that,” Clay said.

Clay, who has a Master’s of Library Science degree and has been head of the Fairfax library system for 31 years, said a makeover of the of the library system was necessary to deal not only with diminishing budgets, but also a digital world, where the Internet has replaced newsprint, e-books have supplanted paperbacks, and the latest films stream directly to your laptop.

Clay noted that in the past five years, the libraries’ budget has been cut by 23 percent and library visits have declined about 10 percent. Circulation is down about 6 percent over that time.

“We have a responsibility to look at the future of libraries and find ways to evolve and compete,” Clay said. “It’s a constant question—‘can you try to change too much?’ The beta plan was not etched in stone. It was a test,” Clay said. “And it seemed to me it was prudent, to say, ‘let’s try these things out. Let’s look at things like appropriate staffing levels.’”

But certain measures in the beta plan, such as giving the county the flexibility to hire librarians who may not have a master’s degree and reshaping the role of youth services librarians—infuriated employees and patrons and sparked a storm of protest.

Clay said he is committed to “starting from scratch,” getting feedback and input from stakeholders and employees. “New beginnings are always good. We welcome everyone’s input,” Clay said.

Michele Endow of Herndon said she looked forward to participating in the outreach meetings. A lifelong library patron, Endow said she was disappointed that Fairfax County seemed to be losing ground when it came to keeping up with library innovations. 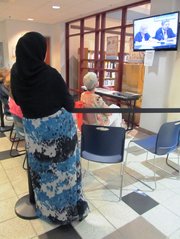 Several George Mason Regional Library staff members as well as patrons gathered in the lobby of the George Mason Regional Library in Annandale Sept. 11 to watch the proceedings of the library board of trustees broadcast on a video monitor. More than 250 people attended the meeting. The main meeting room was so full that the library set up an overflow area in a hallway lobby.

BUT SOME library staff and members of the volunteer Friends of the Library groups remain skeptical of any real change as a result of outreach efforts.

“I’m glad they put this on hold,” said Anita Ramos of Centreville. “But I won’t be happy until this entire beta plan is dead. Dead, dead and dead. Fairfax libraries have played an important role for ethnic minorities and people who don’t speak English. We need specialists who can provide the knowledge that the Internet doesn’t.”

Another longtime library advocate who asked not to be named because of possible job repercussions said much of the damage has already been done. 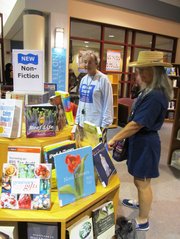 Michele Sendow of Herndon and Anita Ramos of Centreville, both longtime library supporters and patrons, attended the Sept. 11 Fairfax County Library Board of Trustees meeting held at George Mason Regional Library in Annandale to urge board members to put the “beta” plan on hold. More than 250 critics of the plan attended the meeting.

“Trashing thousands of perfectly good books, proposing the elimination of librarians, proposing the elimination of services for kids, proposing the downgrading of library staff both in literal grade and in the variety of depth of their work, sidelining the staff and Friends in the planning process—it is almost a posture of resignation and despair,” he said. “There is already a ruptured trust and lack of confidence from almost every stakeholder group which makes it hard to envision a bright, hopeful new future for FCPL under this leadership.”

“My 32 year commitment has been to produce the very best public library services in Fairfax County and the City of Fairfax,” Clay said. “There’s no way I would jeopardize that.”

Clay said the criticism stings—“It is hard. … I can’t say this whole thing doesn’t bother me”—but what he needs to focus on is helping navigate the future of the library “at an incredibly perilous time.”

“Here’s the bottom line for me. I want the Fairfax County Public Library to be so vital and so vibrant in five years that no one could imagine going a day without interacting with our library,” Clay said.