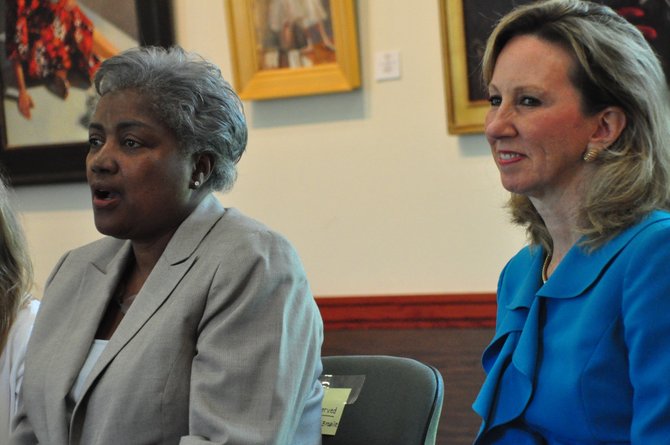 From left, Donna Brazile and Del. Barbara Comstock (R-34) speak to young women at the Great Falls Library Tuesday, Aug. 13. Brazile, who was the first African American woman to manage a presidential campaign with Al Gore in 2000, spoke to the women about pursuing their dreams. Photo by Alex McVeigh. 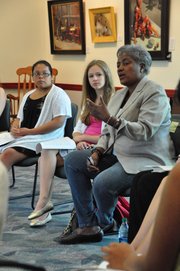 She also served as chief of staff for Washington, D.C. congressional Delegate Eleanor Holmes Norton, chair of the Democratic National Committee’s Voting Rights Institute, briefly as interim chair of the DNC and is now currently its vice chair.

"I started as a little girl from Louisiana who talked way too much, according to my mother, to someone who sat next to President George W. Bush and talked to him about fixing the damage from Hurricane Katrina, and he listened," she said.

Brazile, a native of Kenner, La., described to the young ladies in attendance the exact date and time her childhood ended.

"It was a rainy Thursday, April 4, 1968, and when I came home from school, I was told to come inside and get on my knees and pray, because Dr. Martin Luther King had been murdered," she said. "All I could think about was that someone had killed that nice man who visited our neighborhood a few years before to preach peace and nonviolence."

THAT INSPIRATION eventually led her to her first job in Washington, D.C., working with King’s widow Coretta Scott King and Stevie Wonder to help make Martin Luther King Day an official holiday. Later she worked on the campaign to celebrate the 20th anniversary of Dr. King’s March on Washington.

Brazile encouraged the girls in attendance to never be afraid to try something that they are interested in, and never to let monetary concerns get in the way of their dreams.

"When I write for magazines, sometimes I’m paid 25 cents, sometimes 50 cents, sometimes two dollars a word and sometimes nothing," she said. "But I enjoy doing all of it because it allows me to do something I’ve done since I was a little girl, writing down my thoughts on various issues."

Brazile also said she has held jobs in 49 of the 50 states, asking the women in attendance, "if you know of a job opening in Montana, let me know."

COMSTOCK began the Young Women’s Leadership Program in January of this year, and has hosted several sessions in the 34th district.

"Young women today have all kinds of opportunities available to them. This program is designed to expose them to a wide range of careers and opportunities in our area," Comstock said when it began. "It is my hope The Young Women’s Leadership Program can inspire the next generation of female leaders to bring their intelligence, drive and solutions to careers in government, politics and business."