When Alice Jenkins saw her doctor two months ago, he diagnosed her with high blood pressure and high cholesterol, and suggested she change her diet and lose about 30 pounds. Lawson, 45, started a diet program and has lost nine and a half pounds, but now that she’s in the midst of the holiday season, she’s concerned about losing the strides that she’s made with her dietary changes.

"I have a large family and we get together a lot during the holidays," said Lawson, who lives in Alexandria. "There is always sweet potato pie, macaroni and cheese, and deep fried turkey." 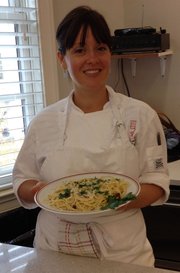 She’s not alone. While the holiday season is a favorite time to celebrate with family and friends, for some it is also a time to overindulge in rich, fat-laden foods. However, local chefs say it is possible to recreate time-honored dishes that are often family traditions with less fat and fewer calories and, most importantly, without sacrificing taste.

"The greatest piece of nutritional advice I might give a class or client would be to increase one’s consumption of vegetables and whole grains," said Nichole Ferrigno, a certified holistic health coach and chef at L’Academie de Cuisine in Bethesda. "Within the framework of holiday foods, I’d suggest making the focus of one’s holiday table whole grains and vegetables."

Tweaking recipes for traditional holiday foods to make them heart-healthy and waistline-friendly is easier that one might think, says Ferrigno. "Many festive and traditional foods of the season are healthy at the core, but have been laden with processed sugars and refined carbohydrates to the point where they cease to have much nutritional value," she said. "Traditionally, we enjoy hearty, warming and nurturing foods this time of the year, which is adaptive behavior, as this is the time of the year when our bodies have greater calorie demands to keep warm."

Lenora Lawson, chef faculty at The International Culinary School at The Art Institute of Washington in Arlington, suggests alternative ingredients for dishes such as cranberry sauce and casseroles.

"When making cranberry sauce from scratch, a lot of recipes call for brown sugar," she said. "You can use agave or honey, or if you really want to get creative you can use pineapple juice."

To make eggnog more healthful, Lawson recommends using skim milk instead of whole milk. "If you want to go way outside the box, you can use almond milk or soy milk," she said.

She even has healthy techniques for fat-laden casseroles. "In sweet potato casserole, you can substitute butternut squash for half of the sweet potatoes," she said. "Instead of using sugar, you can use honey or agave. Instead of traditional marshmallows, use oats seasoned with orange zest sprinkled on top."

Lawson says that white rice is a nutrition culprit that can be replaced easily. "Rice is a holiday meal favorite," she said. "Substitute white rice for brown rice and use a pilaf method by sautéing onion in olive oil and adding vegetables like celery, carrots or peas. You can garnish it with dried cranberries to make it more festive."

For those who love roasted meat, Ferrigno said, "I’d recommend going with a light poultry here, like chicken, turkey or Cornish hen. Keep everything fresh and unprocessed. Actually, a bit of fat is essential in any diet: most of our vitamins are fat soluble, plus fat is what creates satiety and satisfaction. Remember that lots of fiber will absorb excess fat and cholesterol in the blood, so eat lots of those veggies and barley."

Offering advice on holiday desserts, Ferrigno said, "Think gingerbread laced with lots of rich spices and molasses, [which are] high in iron and other trace minerals, pears poached in wine, fresh oranges and cinnamon sticks, or a flourless dark chocolate cake with a simple fruit sauce and a swirl of lightly sweetened Greek yogurt instead of whipped cream."

Lawson has a secret ingredient for an all-American dessert as well. "When it comes to apple pie, most crust is made with white flour and butter," she said. "You can substitute wheat flour and the only difference is that the crust is a little thicker. You can also substitute apple juice for sugar or cook the apples before making the pie and let them concentrate because apples are naturally sweet anyway."