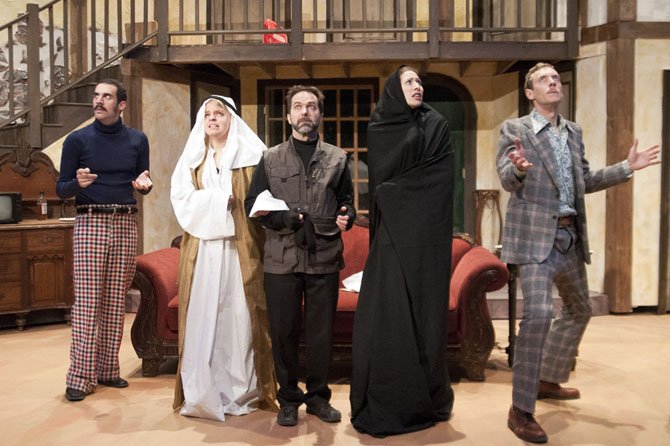 Good news. The cure for doldrums or just a plain-old bad mood is here. It is playing at 1st Stage, where a merry, talented band of actors take the audience on a frenetic, joyful, ride into the farce "Noises Off." The actors literally throw themselves into the production. They are unselfconsciously fearless in their pratfalls, spot-on with their comic timing and bring on a happy, silly bliss.

Not to take anything away from the actor; but the two-story, movable set by Steven Royal and his construction team, along with prop design by Cindy Jacobs and John Schlafstein's sound are worthy of their own applause.

What is "Noises Off" about? It is a look at what can go wrong when a group of people work together to get something accomplished. It is done as a play-within-a-play about a troupe of less than ready-for-prime-time British actors preparing for the opening of their next production. The concept; a first act takes places during the final dress rehearsal, a second act during the performance seen from backstage, and third act from the audience's perspective when just everything goes amok.

Under the assured direction of stage veteran Doug Wilder, the ensemble cast of Kathleen Akerley, Mario Baldesarri, Blair Bowers, Zachary Fernebok, Jason Glass, Kate Karczewski, Dylan Myers and Matthew Pauli are confidently in tune with their comic selves. It takes smart actors with acting chops to "act" badly. They have it. They give in to the ridiculousness of their characters.

Their characters run the gamut of the Seven Dwarves without Snow White around. They are temperamental, forgetful, pompous, cheerful, confidence-challenged, emotional, over-sensitive, envious, overworked, less-than-reliable, nervous and, of course, lingerie clad sexiness.

At the performance this reviewer saw, one of the original actors was ill; her role was performed by the director Wilder. Did it reduce the comic potency of the production, not on your life. He was a hoot; throwing himself into the action.

If you adored the absurdity of Monty Python or cut loose to see the humor in word confusions and well-choreographed chaos, with enough running to make you worn out just watching, with lost contact lens, plates of sardines and some dropped pants, then dash off to "Noises Off."