Teaching Children To Be Charitable
Votes

Teaching Children To Be Charitable

Elena Santiviago walked her 6-year-old son down the aisle of a grocery store near her Arlington home. They picked up five boxes of toothpaste and two bottles of mouthwash, several bars of soap and a few sticks of deodorant. The shopping trip was part of a school project in which students fill holiday stockings with personal hygiene items for the homeless. 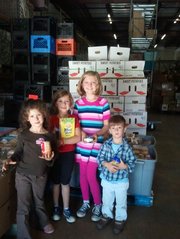 Experts say exposing children to those in need can help them develop a sense of charity.

"I gave him $20 to spend," she said. "I figure he can learn how expensive things are and that there are some people who can’t afford to buy the things the he takes for granted."

Teaching children about charity, particularly during a season when many are focused on making sure Santa Claus gets copies of their Christmas lists, is an important lesson, according to experts. Redirecting a child’s focus from getting to giving this season may not be as difficult as one might think, however. The key, say experts, is for parents to model and foster a sense of generosity.

"Most children are born with a sense of caring for others, which is related to empathy, or being able to put oneself in another person’s shoes," said Amy Van Arsdale, Ph.D., assistant professor of psychology at Marymount University in Arlington. "Empathy and caring are found among humans and other social mammals, and a strong sense of empathy can help people to feel loved and included. As children develop, empathy can be diminished if they are not exposed to it often enough or learn that other characteristics, such as aggression, are more rewarding."

Fred Bemak, Ed.D., who is with the Counseling and Development Program in the College of Education and Human Development at George Mason University in Fairfax, said that some children are more likely to be interested in giving than others. "Children have predispositions for charity, but they are not born with it," said Bemak. "You have children who naturally share more than others. There are some toddlers who share their toys with other children and some toddlers who don’t."

Bemak believes that a sense of compassion must be nurtured.

"A child could have a predisposition for charity, but have parents who don’t foster it," he said. "You can cultivate it by bringing those values into your home environment.

There are a number of ways to cultivate it. "In young children, parents can foster a child’s sense of empathy by modeling this response," said Van Arsdale. "For example, if they see a person who has been injured, the parent could comment on how that injury must hurt. … Ask the child, for example, ‘How might that person be feeling right now?’ These interactions can help foster the child’s empathy for others."

Bemak suggests directly connecting older children with opportunities to help people who are in need. "Take children to serve people who are homeless or refugee populations or people who don’t have resources," he said. "Modeling the behavior is extremely important."

He recalled a personal example from his own life. "I was in Burma working with children who were vulnerable and poor [who were] at high levels of risk," he said. "Outside the gates [of our facility] were homeless children who were in more desperate situations than those children I was working with."

His students learned about charity through processing the experience of having a human encounter. "We talked about what it meant to give," he said. "It was very powerful for all involved. This exercise can be replicated anywhere."

Van Arsdale said that older children learn best about charity when their parents involve them in altruistic activities. "For example, the family could volunteer together by serving meals at a homeless shelter," she said. "This direct, interpersonal experience is more likely to affect the child’s sense of empathy than an indirect experience [such as] telling the child they should be charitable."

Cultivating altruistic values is key to raising children who have a sense of charity. "Share food, possessions, support and assistance in ways that people might need it," said Bemak. "Even a young child can share their toys with other children who might not have toys. In psychology we talk about altruism as a healing variable. Altruism leads to compassion and charity."