A Year in a Fast Lane
Votes

A Year in a Fast Lane

2013 was a big year for transportation projects in Northern Virginia. 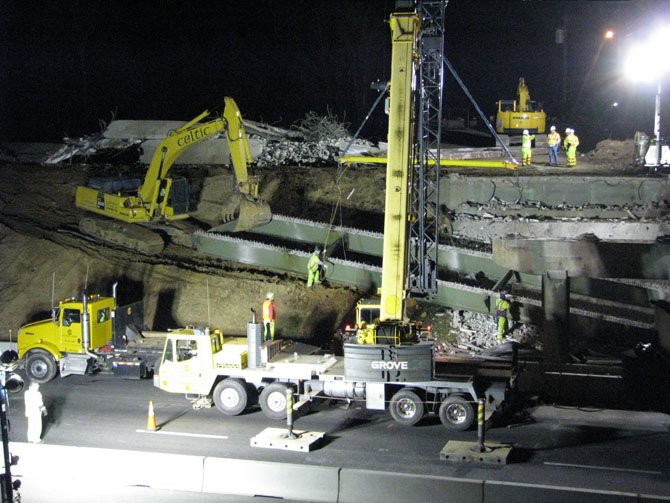 In early April 2013, crews took down the Telegraph Road overpass over I-95 in the Quantico area. This bridge was rebuilt over the summer and fall. Photo by Mike Salmon/Virginia Megaprojects

Throughout the year, Virginia Megaprojects continued its public outreach program that keeps motorists informed of construction and providing commuters with alternate travel options. One popular program has been the Woodbridge Tysons Express buses, the Saturday Metrodirect Bus between Potomac Mills Mall and the Springfield-Franconia Metro Station. Also, the new dynamic travel-time sign comparing HOV travel times to the general purpose lanes and placement of additional message boards and signage are other methods the VDOT Virginia Megaprojects team employs to keep motorists aware of highway conditions.

Construction impacts are also announced on the Megaprojects e-news, an electronic newspaper that is distributed on a bi-weekly and monthly basis. To sign up for the e-news, email requests to info@vamegaprojec....

Construction dominated the scenery on I-95/395 between Garrisonville Road (Route 610) in Stafford County and Turkeycock Park near Edsall Road in the north as the 95 Express Lanes project crews advanced work in the 29-mile construction corridor keeping the project on-track to open to traffic in early 2015.

The 2013 work focused on clearing the roadbed in the median for the new Express Lanes and building new ramps and foundations for nine new bridges including four flyover ramps connecting the Express Lanes to the general purpose lanes and other I-95/395 overhead crossing roads and two new bridge structures on the I-95 mainline over streams and creeks.

One of the major bridge construction efforts was demolishing and re-building the Telegraph Road bridge carrying traffic serving the Quantico, USMC facilities on both sides of I-95 requiring a 9-month long detour. Once the old bridge was demolished, the median ground between 95 north and south was excavated to provide room for new 95 Express Lanes and the new Telegraph Road bridge was built over the summer and will reopen this winter. Currently, new bridges crossing Aquia Creek, Chopawamsic Creek, Russell Road, Joplin Road, Route 1 and Furnace Road are under construction and will be completed this year.

Building the new flyover ramps required the placement of steel beams over the I-95 lanes and several midnight to early morning detours were implemented allowing crews access to place steel beams across the 95 lanes. The flyover ramp south of Dumfries was done first, followed by the flyover near Alban Road in Springfield, and the flyover at Garrisonville Road in Stafford County. Beam placement for the final flyover ramp at Turkeycock Park near Edsall Road will be completed in January 2014. At the Fort Belvoir North Area in Springfield, beams will be placed over I-95 South and Backlick Road in early January and a detour will be in place for this overnight activity. Although this is not part of the 95 Express Lanes project, it is in the same corridor and will impact motorists traveling at night.

In 2014, crews will be finishing the flyover ramp connections, placing pavement, installing sound walls and erecting signs and toll gantry’s throughout the corridor.