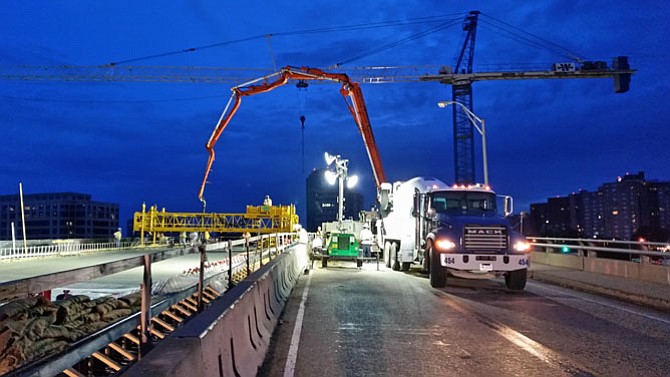 In the overnight hours, crews pour the deck for the Seminary Road bridge over I-395. Photo by VDOT

In Northern Virginia, the Virginia Department of Transportation (VDOT) is working to keep up with growth in the area with transportation projects at both ends of the spectrum. Whether it’s a new highway overpass, intersection improvement, or high occupancy toll lanes, the goal at VDOT is to keep the traffic moving.

On the Capital Beltway (I-495), the 495 Express Lanes opened in 2012 to give motorists an option when traveling through this corridor. Two additional lanes were constructed on the beltway in each direction between the Springfield Interchange (where I-95, I-495 and I-395 meet south of Washington) and a point on the beltway just north of the Dulles Toll Road. These lanes are free to vehicles with three or more occupants, while vehicles with one or two occupants will be able to use the lanes by paying a toll electronically. The express lanes use dynamic pricing to manage the flow of traffic and keep motorists moving, and roadside equipment monitors traffic, adjusting toll prices periodically to maintain free-flowing travel. As traffic increases, the toll price goes up to manage demand.

In December 2014, VDOT opened a 29-mile stretch of express lanes on I-95/395 between a point just north of Edsall Road in Alexandria, to Garrisonville Road (Route 610) in the south. These express lanes are reversible: on weekday mornings, the lanes head north to cater to commuters heading to busy employment centers like Tysons Corner and Washington, D.C.; and in the afternoons, the lanes head south. Again, vehicles with three occupants can use the 95 Express Lanes for free, while cars with one or two occupants can choose to use the lanes by paying a toll, which varies depending on the number of cars in the lanes at that time. All vehicles using the 495 or 95 Express Lanes need an E-ZPass, or an E-ZPass Flex, which has a switch to engage the toll-free option when there are three or more occupants.

Another highway construction project is underway at Seminary Road and I-395 in Alexandria. There VDOT is building a multi-faceted project that include a new 0.8-mile auxiliary lane on I-395 North between Duke Street and Seminary Road, as well as a new ramp from the HOV lanes to the Seminary Road bridge overpass, and a new pedestrian bridge over I-395. These projects are intended to improve the flow of traffic associated with the Mark Center, a federal government building located in that area. The auxiliary lane opened in February with the HOV ramp and the stand-alone pedestrian bridge scheduled to open later this fall.

Other recently opened “Megaprojects” include the Fairfax County Parkway Extension, linking Springfield to Richmond Highway in southern Fairfax County; the fourth lane-widening project, which added an extra lane on I-95 North and South between Springfield and Occoquan; the Telegraph Road interchange on the Capital Beltway in Alexandria; and the 495 Shoulder Lane project on the inner loop of I-495 between the 495 Express Lanes’ northern endpoint and the George Washington Memorial Highway. Similar to the shoulder lane on I-66, this shoulder lane is open during the morning and evening rush hours, with a red “X” or green arrow signaling its availability for travel.

In Arlington, just west of I-395, VDOT is putting finishing touches this summer on a new bridge carrying Washington Boulevard over Columbia Pike. This new bridge replaces a 1940s-era bridge, and includes bike and pedestrian access along Columbia Pike plus room for a future streetcar if needed. The bridge was renamed the Freedmans Bridge after the historical “Freedmans Village,” a community the Federal government established in 1863 for newly freed slaves, that once occupied this area of Arlington.

VDOT officials are now looking to transform Northern Virginia’s Interstate 66 into a multi-modal corridor that moves traffic and people quicker and in a more reliable way.The project, known as Transform 66, is a multi-modal proposal that will to incorporate transit, carpooling and express lanes. The project is divided into a 25-mile stretch between Haymarket and the Capital Beltway, and a separate project inside the beltway with a toll option for travel through Falls Church and Arlington.