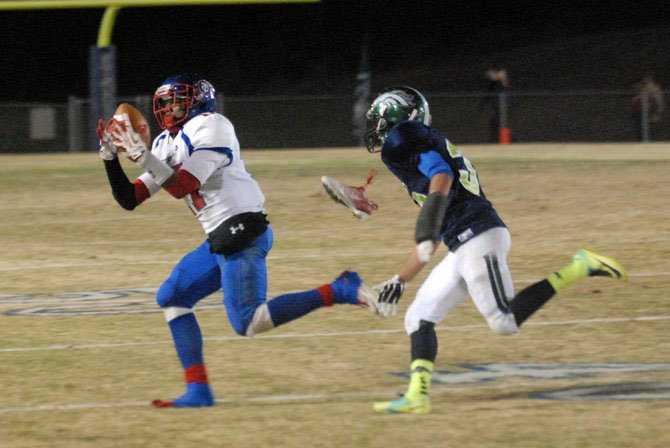 Here is a look at the top moments in Alexandria sports for 2013.

T.C. Williams sniffed the playoffs in recent years, but fell just short in 2009 and 2010. In 2012, the Titans closed the season with a four-game winning streak and entered 2013 with a talented defense and expectations of ending the drought.

Then the Titans went out and did the job.

T.C. Williams qualified for the playoffs for the first time since 1990, finishing the regular season with a 7-3 record, including a 38-2 season-opening win over Oakton and a 24-14 victory against rival West Potomac in the regular-season finale.

“[My] fondest memory was, by far, the victory over West Potomac,” T.C. Williams head coach Dennis Randolph wrote in an email. “It was a great ending to the regular season with a win that gave us a [rivalry] victory and enabled us to finish 7-3. Best record at TC in a long time.”

Why was the 2013 team able to snap the program’s lengthy playoff drought?

“The reason we were able to make the playoffs and finish 7-3 was the hard work put in by the senior leadership,” Randolph wrote. “Starting in the weight room, 7-on-7 competitions, spring camp, and the spring and summer ‘green’ days was critical. Many of our seniors led the way all through the activities mentioned above. For any team, especially football, senior leadership is the key.”

The Titans entered the 6A North region playoffs as the No. 9 seed and traveled to face South County. T.C. Williams held a 21-14 lead with 6:11 remaining in the second quarter, but South County outscored the Titans 37-6 for the remainder of the contest, winning 51-27.

The St. Stephen’s & St. Agnes boys’ soccer team in 2013 reached the state final four for the fifth consecutive season. The previous four trips resulted in just one appearance in the state championship game, which the Saints lost in 2011.

“It was our fifth trip to the final four,” SSSA head coach Bo Amato wrote in an email, “and we were starting to feel Buffalo Bill like.”

The Buffalo Bills reached the Super Bowl four straight seasons during the 1990s but came up short each time. For the Saints, a fifth trip to the state final four finally resulted in a championship.

St. Stephen’s defeated Collegiate 3-0 in the state semifinals on Nov. 6 and beat Cape Henry Collegiate 1-0 in the state final on Nov. 8. The Saints finished the season with a 19-2-2 record and won the IAC championship.

“[My] fondest memory was the relief of our coaching staff at winning, not joy, we were just relieved to win and remove the curse of just falling short,” Amato wrote. “It was spectacular to see the joy on the faces of players, school admin, parents. The reason we won is because the players acted like athletes of the ’70s: hard work, determination, coachability, team before individual gain. Freshmen to seniors, there was no arrogance, the group of men played and practiced as one.

“It was a spectacular year, one that as a coach you really should consider retiring because it will never be better than that, well maybe an undefeated season, but frankly this was better than that because every game for the most part was a one-goal game into the final 10 minutes.”

The state championship game was played in Richmond, but the Saints had a supportive following.

“The biggest memory of the year was that we had 200 people from students, parents, relatives and school staff and admin make the drive to Richmond on the Friday in heavy traffic to cheer on their beloved school on a freezing evening,” Amato wrote. “We have never had that many people watch our games before. The reason they went to watch versus other years was because the lads on the team were gentlemen and liked on campus, their parents are class, as well. Not often you have great parents and players on a team. Normally, the odd parent moans about playing time and positions. These parents let the coaches do their best and supported us and their children to the max.”

The school held a celebration for Way’s accomplishment on Sept. 24, after the Saints had defeated Pennsylvania’s Mercersburg Academy.

“Coach Way is a really unique coach because I respect her so much as a person that when I step out on the field I want to play well for her almost more than for myself,” senior captain Kathryn Cavallo said on Sept. 24. “She’s always positive, always really pushing you to be the best person that you can be. … She’s definitely helped me become a stronger leader in my personal life, as well.”

SSSA finished the season with an 18-4-1 record. Along the way, the Saints captured Way’s 22nd Independent School League season championship and her 21st ISL tournament title.

When asked about her fondest memory of reaching 500 wins, Way wrote: “Seeing so many of my former players come back to celebrate the achievement with me and this year's team.”

After years of finishing near the bottom of the WCAC standings, members of the Bishop Ireton boys’ basketball team entered the 2012-13 season hoping to surprise the conference.

When the postseason rolled around, the Cardinals took advantage of their opportunity.

Bishop Ireton, seeded No. 8 in the WCAC tournament, defeated No. 1 Gonzaga 67-58 in the quarterfinals on Feb. 23. The win earned Ireton its first trip to the WCAC semifinals in school history.

The Cardinals beat Gonzaga despite blowing a 10-point lead.

Louis Khouri and the Bishop Ireton boys' basketball team in 2013 finished with the program's first winning season since 1986.

“I think it’s a program-changer and I hope recruits out there see it and I hope we realize that anything is possible,” Ireton head coach Neil Berkman said last season. “We’ve been coming close the entire year and haven’t been able to get over the hump and when they erased our 10-point lead at halftime and tied it up, everybody was like, ‘Here we go again,’ including the coaches.

“We got over the hump with some toughness and some gang rebounding and making big plays at the big time. Going through the wars every day in the WCAC just made our team resilient.”

Bishop Ireton finished the season with an 18-15 record — the program’s first winning season since 1986.

“My fondest memory was celebrating with our players, coaches, staff, parents, and fans,” Berkman wrote about reaching the WCAC semifinals. “It was a terrific moment for our school and program. Our team persevered through numerous close defeats and it was extremely gratifying to exhibit that resilience and finish the major upset. We were able to achieve the only No. 8 beating a No. 1 in WCAC history (and knocking off the No. 1 team in DC and nationally-ranked Gonzaga) because our entire team bought into the consummate team concept. We continued to compete every possession and put together an entire quality 32 minutes. It was a special moment for Bishop Ireton basketball: first semifinal appearance and our school’s first winning season in 26 years!”

This time, the Titans took home the title.

T.C. defeated Woodson 58-35 in the Patriot District final on Feb. 15 at Lake Braddock Secondary School. It was the Titans’ first district championship since 2009.

“The best memory of winning the district title was definitely cutting down the nets with my team,” T.C. Williams guard Angie Schedler wrote in an email. “We know how hard we worked every day and when we accomplished a goal like that, it proved to everyone else that we were definitely one of the most hard-working teams. We were able to win the title because we came together and fought hard for 32 minutes. We started the game off right and continued it throughout the entire game, as well as shutting down their top shooter.”