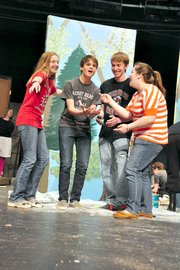 The fairy tale tells the story of a brother and sister, abandoned by their father, who wander into a witch’s lair and must escape before they become her meal.

For freshman Mathew Stanley, this was a first chance to perform onstage. He was a tech in December’s production of “Brigadoon,” but this play helped him find a presence onstage.

“It’s sort of fun being able to play a little boy and be goofy with a lot of physicality and over-the-top acting,” he said. “Plus I learned a lot about projecting and working onstage, really putting myself out there.”

THE PART OF HANSEL is played by freshman Nathan Burns, who is making his first appearance as a lead.

“I had fun playing a sort of whiny brat who’s always complaining and hungry. I like to think that’s a new role for me, but I think my older brothers might disagree,” he said. “My favorite scene is when the witch is yelling at her goblins for screwing something up, and she’s so cruel to them, and they just sink down and get sad, it’s a very funny moment.”

Freshman Anna Hughes, who plays Susie, said she learned a lot about being onstage in front of a crowd.

“I’ve never really had stage fright before, but I did get a little nervous at first, until I learned to have fun with it,” she said. “I learned a lot about keeping a stage presence and how to move the right way, and I think that will help me out a lot in future productions.”

Some younger cast members have performed with Herndon High School when they were younger as students at Herndon Middle.

“I did ‘Fiddler on the Roof’ when I was in seventh grade, and that was with a lot of the people who are still in this department, which made it fun,” said freshman Brenna Emery, who plays the Owl. “It’s fun watching people get comfortable in their roles and learn to have fun up there.”

From a set design standpoint, the tech crew felt it was important to keep members of the audience, who are younger than the typical Herndon High School crowd, engaged.

“We tried to keep sets simple to keep children and parents entertained, and we tried to make the designs very animated, funny and colorful,” said senior Cameron Kelly, the stage manager for the production. “I’m usually a tech guy, so this was a fun way to be able to work with actors.”

Unlike the department’s bigger productions in the fall and spring, the children’s show gives the crew about two weeks to pull everything together, all while sharing the stage with the cast and other organizations at the school.

From left, Herndon High School Alissa Clayton and Meghan Suess run the lighting for the school’s production of “Hansel and Gretel,” which starts Friday, Feb. 15.

“The whole idea of a simple set is to minimize time between scenes, because if that takes too long, we’ll start losing the attention of the audience, we want scenes to flow together smoothly with minimal delay,” said junior Hunter Robinson, the tech director. “We also tried to keep it basic, with only a few pieces, because kids can use their imagination to fill in the rest, and that makes it a more interactive show.”

Costume designer Hannah Coyne, a senior, said she enjoyed the challenge of trying to make the costumes fun to look at, while maintaining the character of the original tale.

“It’s a Grimm’s fairy tale, so I was definitely interested in going back to the original German-style costumes. There’s no lederhosen, but it’s close,” she said. “My favorite part of this process is putting everything together over the course of a few weeks, and seeing it all come together by the time we get to dress rehearsal. The witch’s costume was a lot of fun, because you can make it as crazy looking as you like.” 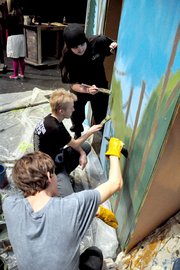 HERNDON HIGH SCHOOL’S PRODUCTION of “Hansel and Gretel” will be performed Friday, Feb. 15, at 7:30 p.m. and Saturday, Feb. 16, at 10 a.m. at the Herndon High School auditorium. Tickets are $5 and can be purchased at the door.