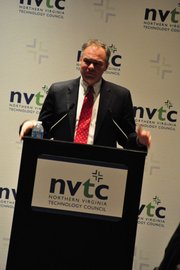 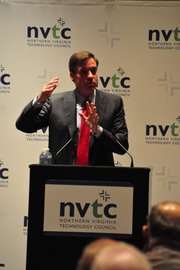 Senators Mark Warner (D) and Tim Kaine (D) spoke to members of the Northern Virginia Technology Council Friday, Feb. 8, at the Sprint building in Reston. The two senators spoke about the threat of sequestration as well as the country’s ongoing debt situation.

Warner said that sequestration would be “worse than you can imagine” should the automatic federal budget cuts come into effect after the March 1 deadline.

He pointed out the difference budgets can have year to year, such as with the Department of Defense paying for ships or other big ticket items, which can cause massive swings in budget.

He also said that sequestration would cost the taxpayers massive amounts of money because sequestration will force cancellations of contracts, which will cause the government to forfeit its legally required volume discounts for certain purchases.

“If we have to go through a little bit of sequestration before we come to our senses, let’s at least give the secretaries the appropriate budget authority to be able to move money from one account to the other,” he said.

Kaine, the Virginia governor from 2006 to 2010, was elected to his first term in the senate last November. He stressed the seriousness of the current budget woes the country is facing.

“The single greatest threat to national security is budget uncertainty,” he said. “Because our ability to deal with any external threat depends upon having some degree of certainty so we can plan to address the challenge.”

Kaine said the country needs to let national security needs drive the budget, not the other way around. The problem, he said, isn’t just dealing with ways to find the billions needed for large projects and defense items, it also is a major issue for the men and women of the armed forces.

“I met a 20-year-old Airman who was preparing for her first deployment, and she told me ‘I’ve been thinking about a career in the military, but maybe because of the budget situation that’s not a realistic goal to think about,’” he said. “This situation is affecting the thinking of a lot of people who will be leaders of this country in the future, so we’ve got to get it right.”