From Amazon to Shutdown
Votes

From Amazon to Shutdown

Kaine and Warner comment on the topics of the day at Northern Virginia Chamber of Commerce roundtable. 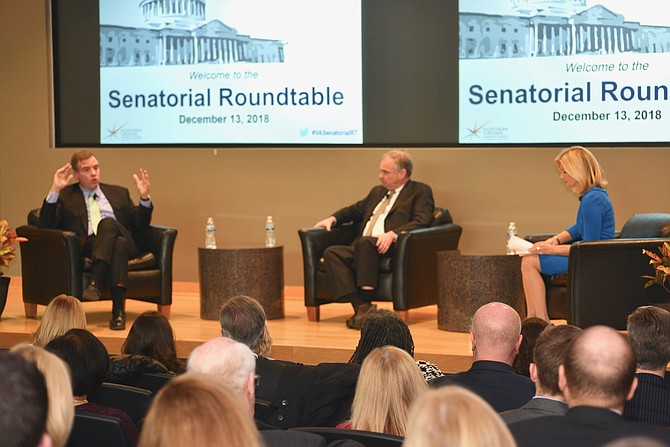 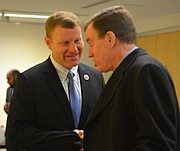 Fairfax County Supervisor Jeff McKay (D-Lee) meets with U.S. Sen. Mark Warner after the discussion. McKay says he agrees that the Amazon deal was an affirmation of Virginia and its workforce. The supervisor also said he and the board were willing to participate in any way necessary to continue the press for affordable housing and to invest in workforce development.

“I’ve been wrong before, so who knows? But I don’t think we will see a government shutdown over this budget and the border wall.”

That was U.S. Sen. Tim Kaine’s opinion at a roundtable discussion with his colleague U.,S. Sen. Mark Warner. The event was hosted by the Northern Virginia Chamber of Commerce, held at the Arlington campus of George Mason University, and moderated by NBC4 News Northern Virginia Bureau Chief, Julie Carey.

The question of a possible government shutdown with its disproportionate effect on Northern Virginia was one that the audience of area businesses, nonprofits and local government representatives were anxious to hear.

“There are two bipartisan options on the table for the President to choose from,” added Kaine, and if neither is to his liking, Kaine said that Congress could still move forward and “kick the can” with one or more Continuing Resolutions. “We can write the checks two months at a time.”

Warner agrees, while noting the situation is somewhat better than it has been during past similar circumstances.

“There are seven appropriation bills ready for signing,” he said. “Seventy-five percent of the needs are already funded through the regular rules of order.”

Border security is the last piece, with the president threatening the shutdown if Congress doesn’t provide him with the $5 billion he’s asking to build the border wall. “We’re still waiting for that check from Mexico [that Trump keeps promising],” Warner joked.

Warner is not opposed to spending on border security. He just doesn’t see the value in massive spending on a wall or fence that would also require maintenance and manning. Spending on drones and other proven technologies would garner his support, “and would be more effective and cost a lot less now and in the future.”

The same applies when it comes to defense spending, which the senators say that the President wants to increase. “Virginia would certainly benefit from more defense spending,” said Kaine, but he doesn’t think it’s really a good idea or the right answer.

WARNER WORRIES that this administration is going all in “to buy the best of 20th century stuff” instead of focusing on what’s needed to fight the “real battles of today.”

Both men see that fight as cyber wars and attacks of misinformation — “taking place daily” declared Warner — and the surpassing of the United States in technology and trade by China, Russia and others. None of these “real, modern threats” will be won by the addition of another battleship or even more troops.

Calling the government’s lack of preparedness and outdated networks and devices “stupid on steroids,” Warner gave examples of continuing purchases of devices without even the most basic of safeguards. “We are literally adding to our own vulnerability.”

Warner will be pushing for a cohesive “cyber strategy” going forward and thinks that Virginia could become the Cyber Capital, since no one else has yet laid claimed to that title and role.

WHAT ABOUT the addition of Amazon in the senator’s own backyard?

“It’s a game-changer for the region,” in Warner’s view, praising Gov. Ralph Northam and the many others who worked on the deal to make it possible. Warner also sees the Amazon addition as another building block to the growth of a local economy that he says has continued to experience “real weakness” and a “level of vulnerability” post-sequestration. He also hopes that Amazon and the support services that will follow in its wake will help stem the decline of millennials in the region.

Risking what he said might be considered a “little bit of heresy to say with an Arlington crowd,” Warner has his fingers crossed, and will do what he can to encourage some “down-state” job benefits from those support services.

Kaine noted that the Amazon move, while fairly well-accepted throughout the Commonwealth, received a resounding 90 percent approval rating from Virginians in the Appalachians.

“They see the connection with our shared successes.”

Both Kaine and Warner agree that the arrival of Amazon poses challenges, but provides the best opportunity to add impetus to working on two of the region’s biggest problems: affordable housing and workforce development.

Kaine sees Amazon’s choice of Virginia as one of their new headquarters as an affirmation of the workforce quality that the state can offer, but warns that it is critical to work toward producing that workforce, rather than allowing local companies to merely “cannibalize each others’ best workers.”

Work has already begun to update and re-write the “Higher Education Act” and Virginia is the chair of that taskforce. Kaine says there is plenty that can be done at the federal level to encourage employers to “treat their employees like the assets they say they are” with tax incentives, changes to accounting rules, re-do’s of laws that hinder continuing education, and more emphasis on all forms of education, not just four-year college schooling.

On the subject of affordable housing, both men have ideas that they will support.

Kaine believes that Congress can assist by expanding the Low-income Housing Tax Credit. “It’s already a good program” and is a good place to start, rather than trying to “recreate the wheel,” but admits that to date, it’s been a tough sell.

Warner called for a regional housing authority to tackle the issue. The state already has a housing development division and will soon have millions to develop housing initiatives as part of the Amazon deal, but to deal with the problem locally requires local thinking and collaboration in his view.

QUESTIONS ABOUT METRO, transportation and infrastructure were also on the table.

Working together, Virginia, Maryland and the District helped the rail service gain its first dedicated revenue stream this year, but the additional federal $150 million per year is not guaranteed year over year. Kaine and Warner are hopeful, with a Democrat-controlled House to be seated in January, but it’s still but something to count on, “but if we can get the $150 million again, we’ll take the money and run,” said Warner.

The two senators lamented the fact that the anticipated “Infrastructure Bill” is nowhere in sight, with Warner going to so far as to label the Trump Plan “a scam extraordinaire, a shell game … stealing money from the highways departments and projects” and leaving them unable to repair the country’s crumbling infrastructure. With a “builder President in the White House,” Warner thought that infrastructure work would have been easy for both sides of the aisle and all levels of the government to connect, but sees nothing of consequence taking place.

And the last question that Carey posed to the senators? After the midterm elections, would they now categorize Virginia as a “Blue State?”

Warner wouldn’t say specifically, but he does think that the Northern Virginia delegation to the General Assembly being all Democrats will be a benefit.

Kaine still sees Virginia as “battleground trending Blue,” but if the GOP “keeps putting up cultural warriors and ideologues as their candidates, if that’s the matchup — we’re Blue!”