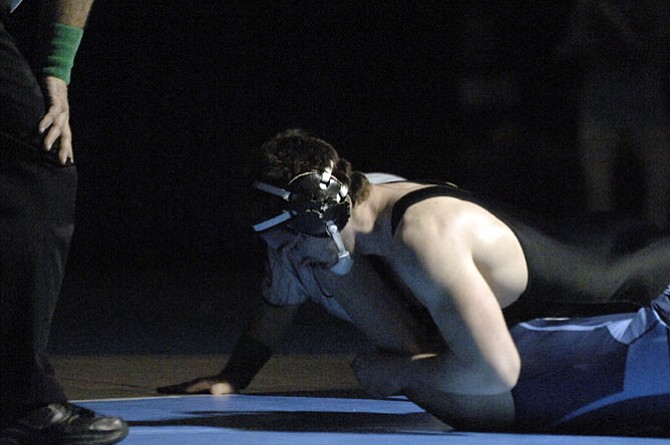 A reporter interested in Tyler Love’s performance during the 195-pound championship match at the 6A North region wrestling tournament decided to first interview a winner from a previous match before turning his attention to Love.

“He stopped the first move I tried to do,” Love said. “We got back on our feet, he took a shot and it was almost just instinct. I just kind of tossed him right to his back and then squeezed real tight and hoped for the best.”

The win was part of a dominant performance for Love, who earned Most Outstanding Wrestler for the tournament and was recognized for pinning three opponents in a combined 2 minutes, 6 seconds.

“It’s an awesome win because it’s at Centreville — the home turf,” Love said, “but ... it’s just a stepping stone to the state tournament.”

Westfield heavyweight Austin Knies, left, wrestles against Madison’s Drew Smith in the 285-pound final at the 6A North region tournament on Feb. 14 at Centreville High School.

Knies placed fourth at regionals as a sophomore, but wasn’t able to compete as a junior due to injury.

“That’s why this means a lot to me,” Knies said, “because I didn’t get a chance to compete at region my junior year when I felt I had a chance at winning.”

Chantilly’s Brian Kim finished runner-up at 220, losing to Annandale’s Tony Gibbs, 4-3, in overtime in the final.

The state meet is scheduled for Feb. 20-21 at Robinson.