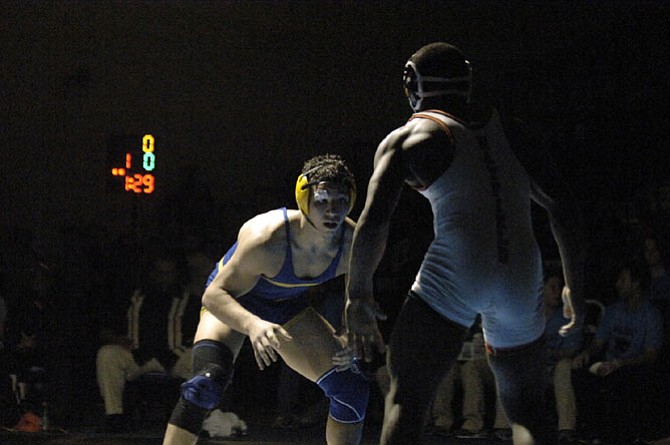 Starting from bottom position, DePasquale timed his lunge perfectly with the referee’s starting whistle and worked free from Hayfield’s Antonio Agee with 6 seconds remaining in overtime, earning one point for an escape while forcing an ultimate tiebreaker.

DePasquale would secure the win with another escape, capturing his second region championship with a 3-2 victory on Feb. 14 at Centreville High School.

“You go when [the referee] inhales --- right before he exhales in the whistle,” DePasquale said. “You’ve got to time it just right. I’m glad I got a head start on him and I was really fortunate.”

DePasquale received a cut above his right eye during the first day of the regional tournament. The cut re-opened during his match against Agee, leading to multiple blood-time stoppages.

DePasquale at first had gauze placed over his right eye and eventually had a wrap around his head, limiting his peripheral vision. DePasquale, who missed nine months due to injury, also battled fatigue, having been back with the Rams for less than a month.

“I knew Agee was going to be tough; I knew he was a really good wrestler,” DePasquale said. “I’m just glad with my limited training I was able to come away with the win.”

“It was a low-scoring match,” Haskett said, “but I felt I was in control the whole time.”

Haskett, who finished state runner-up at 120 in 2014, said he is motivated by the way last season ended.

“Every day I think about last year [and how] I was runner-up,” Haskett said. “[I will likely have] the same kid (Colonial Forge’s Joshua Nail) this year [in] the state finals. [It] motivates me every day. This time I’m gonna win it.”

Love, the defending 195-pound state champion, received the tournament’s Most Outstanding Wrestler award, and was recognized for pinning three opponents in a combined 2 minutes, 6 seconds.

The state meet is scheduled for Feb. 20-21 at Robinson Secondary School.