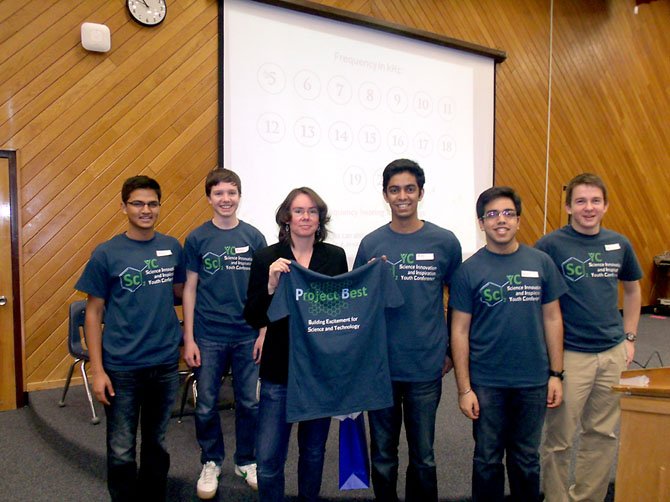 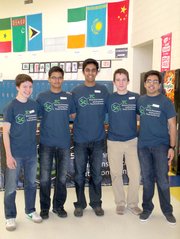 Core members of Project BEST, from left, Robert Young, Nikhil Garg, Parth Chopra, Roy Rinberg and Dhruv Gaba. The study of science and technology among youths was given a boost on Saturday, Feb. 9, at the Langston Hughes Middle School.

“I hope to show the students that there are different ways to get to science."

Students at work during the forensic analysis session at the conference.

Project BEST (Building Excitement for Science and Technology), the organizer of the event, according to the founder and CEO, “is a non-profit organization dedicated to providing students with education, enrichment and a joy for learning and understanding the exciting science and technological advances happening around us.”

Parth Chopra working with Robert Young, Nikhil Garg, Roy Rinberg and Dhruv Gaba—all juniors of Thomas Jefferson High School—came up with idea of the project, which he described as “100 percent student driven.”

Natalya Washington, eight grader, Langston Hughes Middle School, demonstrating the bicycle wheel gyroscope at the event: “I like the gyroscope and the spinning wheel. I learned that mice can hear lots of things than we can, and that earphones can hurt our ears.”

Activities during the day-long event include forensic analysis during which students participated in finger printing, chromatography and DNA analysis. Classical mechanics in physics, such as centripetal motion, linear momentum, angular momentum and conservation momentum were also demonstrated using tools such as bicycle wheel gyroscope and spinning table.

One of the speakers at the event, Dr. Roian Egnor, a neurobiologist from the Janelia Farm Research Campus, Ashburn, demonstrated the vocalization and the behavior of mice. She said, “I hope to show the students that there are different ways to get to science.” Other speakers at the event included Mike Bruce, the president and CEO of Inscope International, who gave an interactive demonstration of how STEM can be applied to students’ lives.

In her comment, Joyce Matthew, the STEM chairperson of Walt Whitman Middle School, said “events like this are great, the focus is to get minority students and girls involved in science, and it’s great to see students running it.”