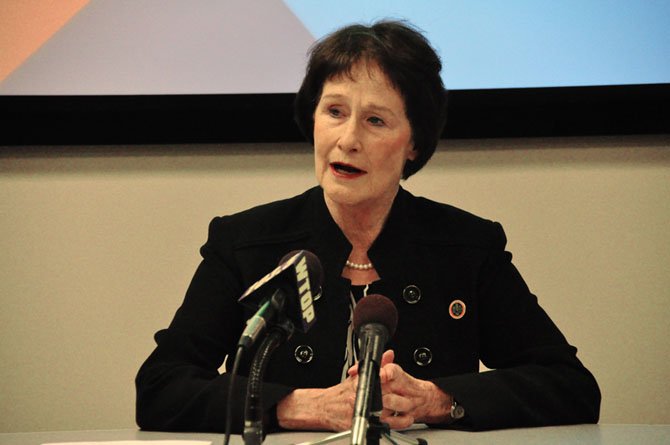 Fairfax County Board of Supervisors Chairman Sharon Bulova premiered her “State of the County” address Wednesday, Feb. 20. In the 20-minute video, Bulova addressed what promises to be an eventful year in the county, one that will see the opening of five new Metrorail stations in Tysons Corner and Reston.

Bulova pointed to several signs that not only has the county weathered the economic storm over the past few years, the future looks promising. 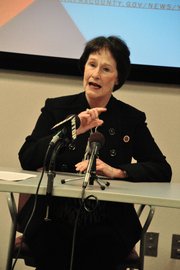 “The county is home to 10 Fortune 500 companies, five of these have relocated within the last four years. Consumer confidence is rising and the number of foreclosures is falling,” she said. “Home sales are up and unemployment is down, well below the national average of nearly eight percent. While we are not yet out of the woods from the impacts of the recession, clearly we’re on the right track.”

Bulova said that the county’s future is tied to the redevelopment efforts going on now and planned for the future, with transportation changes a major part of that development.

“As Fairfax continues to mature, it’s important that we accommodate our future growth and existing population in ways that make it easier for our residents and workers to live, work and play without always needing to get behind the wheel of a car,” she said. “Aging commercial centers near mass transit, like Tysons, present especially valuable opportunities for attractive, transit-oriented mixed-use revitalization.”

“While we are not yet out of the woods from the impacts of the recession, clearly we’re on the right track.”

But while the Metro and some related development will be opening this year, Bulova mentioned that it would be a number of years before all the changes are in place.

“The transformation of Tysons is going to be an evolutionary process. The transportation plan we have adopted and the finding mechanisms the board adopted are meant to serve the community over the next 20 or 30 years,” she said. “You’re not going to see the development happen at once, and just as that will happen over time, so will the transportation improvement. Developers are working with the county on establishing a grid of streets, and they are dedicated either a right-of-way or building as part of their application, segments of the grid of streets.”

Bulova said by 2050, “but hopefully before,” the grid of streets in Tysons would be operational.

In a follow-up to the official State of the County address, Bulova also discussed the county’s concern when it comes to federal spending cuts that could be happening as early as March 1 as a result of sequestration.

She said there is an “absolute concern” about sequestration, and the county is already seeing effects in terms of budget planning and government-related business decisions on things like renting new office space. She said the county is looking at diversifying its economic base.

“One of the things that Fairfax County has been doing is to increase our commercial base in areas that are not necessarily federal or defense related. One thing we were happy to see was the move of the Hilton Headquarters to Fairfax County, which is a new commercial opportunity,” she said. “We’re also working with the EPA and INVOA Health Systems to restore opportunities for personalized and translational medicine. The name of the game is finding areas that make us more diverse than we’ve been in the past.”

The entirety of Bulova’s State of the County address can be found online at http://www.fairfaxcounty.gov/cable/channel16/vod.htm.