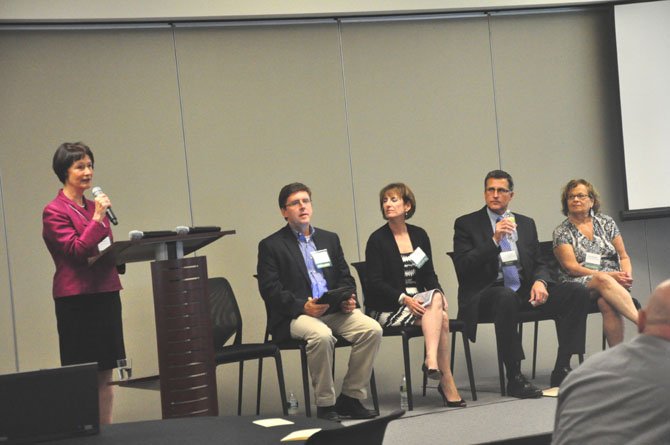 The Greater McLean Chamber of Commerce hosted a panel discussion with officials from the various projects that will shape the future of Tysons Corner at the Capital One Headquarters Friday, June 8 .

"When the board adopted the plan, there were some people who speculated one how many people might want to redevelop their property and people thought maybe five," said Barbara Byron, director of the county’s Office of Community Revitalization and Re-investment. "But we have 17 in right now, requesting more than 44 million square feet of new development, basically twice what we have going on today."

Byron said there are also several by right projects that are currently under construction, including the new first high rise development located behind The Container Store, as well as a Wal Mart and health club in western Tysons Corner on Leesburg Pike between Ashgrove Lane and Westwood Center Drive.

OF THE 17 MAJOR REZONINGS submitted to the county under new comp plan, Bulova said six will be voted on before the end of the year. Walter Alcorn of the Fairfax County Planning Commission said that the two major issues that arose during the development of the Tysons plan were phasing and financing. He said the financing discussions brought to light a lot of information about which sector would be paying for various costs.

Alcorn also said that he believed that most improvements inside Tysons will be funded by the private sector, for those outside, like Route 7 beyond the Dulles Toll Road, would be primarily funded by the public sector.

The four Tysons Corner Metrorail stations are an integral part of the new Tysons, aimed at getting people out of their cars and opening Tysons up to the rest of the area when it comes to mass transportation.

"This rail line ties us in with the existing 106 mile Metro system. It gives people who live on the Red Line, in Laurel and Ballston immediate access to Tysons, McLean, the Dulles Corridor," said Marcia McAllister, communications manager for the Dulles Corridor Metrorail Project. "We hope you’ll be able to take a train from Ashburn, we hope, or Route 28 Herndon and Reston all the way to Stadium-Armory without transferring."

Construction on Phase One is now 73 percent complete and is expected to be done by Summer 2013, with service starting in late 2013.

ANOTHER PROJECT that will be a major part of Tysons Corner are the 495 Express Lanes, two variable-priced toll lanes in the middle of the Beltway going both directions. There will be a sign at each entrance displaying the price to enter. Though the price can change as quickly as every six minutes, drivers who enter at a certain time are locked into that price.

"There will be a continuous change based on real-time traffic data, a fully open road toll, no tollbooths no slowing down, no cattle chutes, it’s full highway speed," said Tim Steinhilber, general manager of the project. "It will be separated from the general lanes by a four-foot painted buffer of plastic bollards, which are flexible, primarily to allow first responders to get to places quickly, they can roll right over the bollards and they’ll pop back up."

The lanes will be HOV-3, which means vehicles with more than three people will not pay a toll. Vehicles using the 495 Express Lanes will be required to have a new EZ Pass Flex transponder: If drivers want to drive as HOV, they will trigger a switch on the pass to say there are three people in the car, and a toll will not be charged.

The transponder can be toggled back to regular toll mode if there are less than three people. The new EZ Pass Flex transponders will be available later this summer from both Virginia and Maryland Departments of Transportation.

Steinhilber said there will be active enforcement of the HOV rules.

"It’s important for us to keep the road open, and it’s only fair for the toll payers and for legitimate HOVers that we stop people from claiming HOV when they’re not," he said. "By law, the Virginia State Police need to patrol our road for traffic violations like any other road. We’ve entered into a contract with them to provide 11 additional troopers, and we’re providing those troopers with information... we’re going to tell the trooper who is declaring HOV status."

The troopers will have antennas, paid for as part of the project, so they can read what mode a car on the 495 Express Lanes is in. By law, troopers must visually confirm less than three people before pulling anyone over.