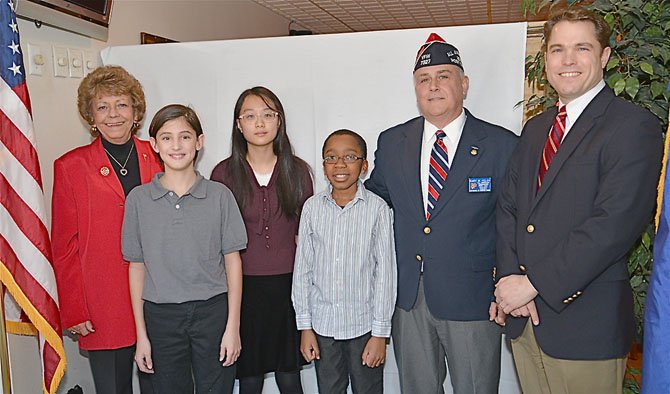 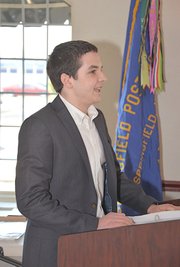 Michael Marriott presents his winning essay for the VFW Post 7327 and its Ladies Auxiliary 2012-2103 Voice of Democracy Awards.

Sunday, Feb. 24, was the long awaited date for a fabulous awards ceremony, but if you are thinking of that other red carpet event, think again. The honorees for the Springfield Veterans of Foreign Wars Post 7327 and its Ladies Auxiliary Annual Awards really stole the show. At a luncheon held at long-time VFW and community supporter JW & Friends Restaurant in Springfield, the Post and its Auxiliary presented the recognition and monetary awards for local winners in a variety of categories. After a call to order by former Post Commander and this year’s Chairman of the Awards Committee Wayne Yancey, the Pledge of Allegiance by the gathering, and a welcome to honored guests by Auxiliary President Linda Bond, Post Commander Gary Kelch described each award and began calling the winners to the podium. 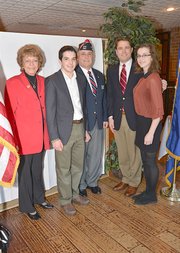 “The VFW believes strongly in good citizenship and fostering patriotism in our leaders of the future,” said Commander Kelch. The Patriot’s Pen and the Voice of Democracy (VOD) Awards do just that. The former is a 300- to 400-word essay contest open to students in grades sixth through eighth. This year’s theme was “What I Would Tell Our Forefathers.” The VOD is an oral competition, in which students in grades nine through 12 submit recorded three to five minute spoken essays. “Is Our Constitution Still Relevant?” was the topic that challenged the young entrants in the VOD category.

KEENE MILL ELEMENTARY School’s sixth grade put on a strong showing, providing all three winners of the Patriot’s Pen awards. First place went to Shane David King. Second place was awarded to Sion Kim, with third place honors received by Rishon A. Elliott. Appearing a bit nervous but equally proud, all three youngsters stepped forward in turn to receive a Letter of Congratulations from Sen. Mark Warner, a copy of the Congressional Record announcing their achievement, provided by Congressman Gerry Connolly, a Certificate of Accomplishment from the VFW and checks from Post 7327 and from the Ladies Auxiliary in varying amounts. 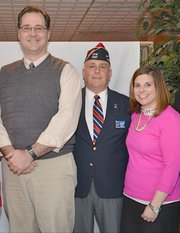 Home-schooled sophomore Michael D. Marriott was the first place winner of the Voice of Democracy Award and he personally presented his essay on the relevance of the Constitution today. “Our Constitution’s very relevant function is to limit the government’s power; the people’s responsibility is to enforce this document,” he declared to the gathering. Home-schooled senior Kathryn Cummins accepted the second place honors in the VOD competition. 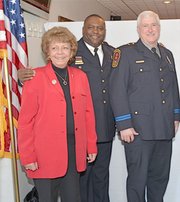 The Post and Auxiliary also paid tribute to a number of adults and local companies. Two history teachers, Erin Poppe from Hayfield Secondary, and Michael Walser from Poe Middle School received the letters of recognition, Congressional Record, monetary prizes and a special “crystal apple” plaque for their “outstanding commitment to teach Americanism and patriotism.”

Public Safety Awards went to EMT of the Year Kayla Thompson of the Greater Springfield Volunteer Fire Department of Fairfax County, and George Joca of the Springfield District Station was declared the police officer of the year.

Karen Stone represented the hosting venue JW & Friends Restaurant in accepting an award for service and support. Commander Kelch made note of JW’s generous support not only of the awards ceremony, but also for last year’s Honor Flight event when the Post hosted a group of World War II veterans on a trip to visit the Nation’s Capital. Although they do not offer catering services, JW’s rose to the occasion and provided the celebratory dinner for the veterans.

THE FINAL AWARD went to the Northern Virginia Surgery Center, accepted by Joanne Kelch, for their support of the Post’s annual Holiday Food and Gift Program that helps local military families makes ends meet at Thanksgiving and Christmas.