A Lesson of Love
Votes

A Lesson of Love 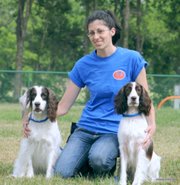 For Kolleen Raitz of Lorton, twelve-and-a-half-year-old springer spaniel Lanny acts as more than just a lifelong friend, but as the reason she decided to pursue a career as a dog trainer. “She's special for so many reasons, but mostly because of the profound effect she has had on my life and the lessons she has taught me over the years. She is, without a doubt, the single most important thing that has ever happened to me. She has taught me everything, from patience and forgiveness to self-control and being able to believe in myself. She taught me that the ribbons, titles, and awards matter little in comparison to the journey itself. But by far, the most important lesson she has taught me is that of love. 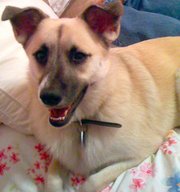 Heidi settles down for a nap at the Harmon residence in Lorton.

She has loved me, unconditionally, through many of my worst moments. She suffered through a lifetime of mistakes while I was figuring out how to be a dog trainer. And somehow, even after doing so many things wrong and making so many mistakes, she remains hopelessly devoted to me. I have often wondered how I could possibly be deserving of such love. No dog will ever compare to her … no matter how many dogs come after her, she will always be my first and greatest love. A lot of dog owners talk about that "once in a lifetime dog"—the one dog who is unlike any other, the one who you will never be able to replace, and the bond that you share which can never be replicated ... Lanny is that dog for me.” 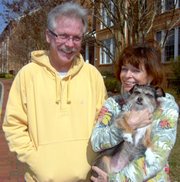 Don and Anne Wood pictured with Fritz outside their Burke home.

When the Harmon family originally decided it was time to add a new member to their home in Lorton, they expected to be picking up a male shepherd puppy mix from the local pound in Brandon, Fla. “You can imagine how surprised we were when we picked Heidi up and he was a she,” said Linda Harmon. With no apparent shepherd traits, Heidi is six-and-a-half and companionable as ever. “She’s really a big sweetheart,” said Harmon. “She’s very mellow and loves to be where the people are.” When things get hectic in the Harmon household, Heidi is able to balance out the chaos with her mellow and friendly disposition. In return for her services she enjoys lamb treats and lots of attention. 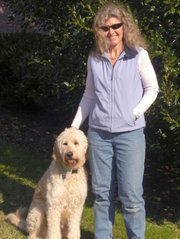 Kim Leavenworth and Brody out for a stroll by the Lorton trails.

At age 7, Fritz is a Jack Russell/Chihuahua mix. After being picked up as a rescue dog at a Petsmart in Oklahoma, Anne Wood drove 700 miles to bring Fritz back home to Burke with her. “She stayed on my lap the entire time and did not move a muscle,” said Wood. “I think on some level she realizes that we saved her.” Wood had lived in the Burke area for a year at the time, and Fritz quickly adapted to the “homebody” lifestyle. “Although she can get a little hyper, she’s very well-mannered,” said Wood. “She enjoys moving my shoes around the house.” Unlike most dogs, Fritz prefers to reorganize her owner’s closet as opposed to chewing down on Wood’s leather. “It’s so funny because she won’t chew on the shoes at all,” said Wood. “She just has a habit of cleaning up after me!”

A rare addition to the Lorton Community, Kim Leavenworth’s dog is a golden-doodle. Half golden retriever and half poodle, Brody towers over the Leavenworth household. “He loves to play with other dogs,” said Leavenworth. “But I’m not sure he realizes quite how big he is.” At a whopping 85 pounds, Brody is an extremely sweet and friendly dog. “He loves everyone,” said Leavenworth. “He’s also incredibly intelligent. He can understand simple words like ‘dinner’ and ‘walk’ and has begun to learn the family members names.” Still recovering from the loss of one of their former pets, the Leavenworth household was a little hesitant to get another dog. “My daughters found a woman in West Virginia who was selling him,” said Leavenworth. “We picked him up on Dec. 26, 2011, and he turned out to be one of the best Christmas presents we could have ever asked for.”