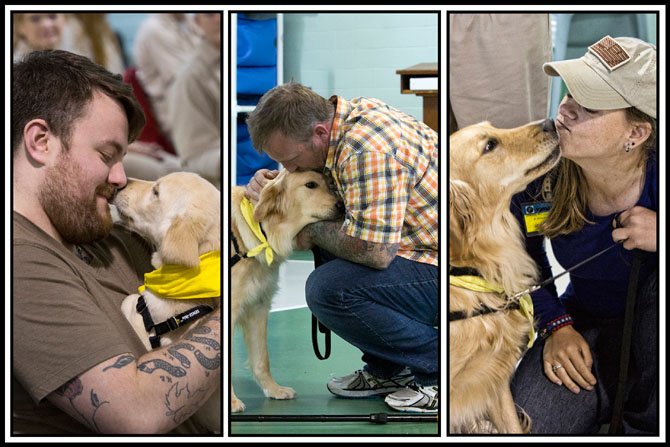 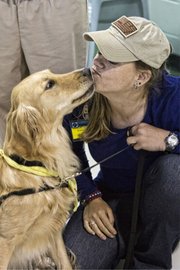 Rebecca, a pretty blonde in her mid-40s, is holding Ziva, the puppy she is currently training. We might have been two strangers at a local dog park, caught up in a conversation that could have gone on for hours.

But we weren’t at a dog park. We were sitting inside Lakin, an all-women correctional facility in West Virginia. And Rebecca, an assistance dog trainer for paws4people.org’s in-prison training program, paws4prisons, is serving a sentence of life without parole for a murder committed 21 years ago.

And that comfortable scene on April 4, 2014 was a far cry from how I felt on my first prison shoot, over four years ago.

When I first started going inside prisons for paws4people.org, my job was three-fold: to capture, through photography, the connection between the dogs and their inmate trainers, to provide images that reflected the accomplishments of months of training and to document the moment that veterans, children and young adults were matched with their assistance dogs.

On my first visit, I was scared. No open-toed shoes. No open-heeled shoes. No jewelry. No underwire bra. No khaki clothing. Cell phone and drivers license were left behind and I shuddered a little as the first set of metal doors clanked behind me. Shivering with cold, I walked through the next set of gates into the West Virginia winter, casting furtive glances at the barbed wire fences that surround the prison.

Almost five years later, khaki uniforms, barred windows, loudspeaker announcements and door buzzers all melt away as Rebecca and I chat comfortably about her past, her present and her future behind bars.

For Rebecca, it’s personal. The paws4prisons program staff and volunteers “give you the tools from a caring position to show you how to work through … the mistakes you make in life In order to be a better person.” Rebecca adds that, for her, it’s been “life-changing.”

One of the tools is mutual sharing. Stories of isolation, drugs and alcohol, abuse, fear and loneliness are the rivers that have carried each speaker to this day.

Hyper-vigilant veterans wrestling symptoms of PTSD anxiously wait to share their stories with inmate trainers, prison officials and paws4people staff and volunteers. Only after that do they get a turn to meet the dogs one at a time in a ritual called a “bump” where paws4people staff determine if there is a match. Before and after each person shares, soft, cuddly puppies are passed around to help calm nerves.

For the trainers, it’s more complicated. In addition to sharing their stories publicly, their skills as trainers will be on display. They are as anxious as parents that their dogs do well during demonstrations and the matching process. They will be proud if their dog is matched, but they know that a match today will bring them one step closer to losing their canine companion.

The room set-up is reminiscent of an old-fashioned wedding, with an inmate-trainer side and a free-civilians side. Thirty dogs, mostly golden retrievers, rest quietly on both sides of the aisle.

SNIFFLING CAN BE HEARD quietly echoing off the cement walls as Melissa, an inmate trainer, stands at the podium to share her story. She tells of a happy childhood ending when an uncle took her to a secluded woods and raped her so violently that she had to have a full hysterectomy, at age eight. No charges were filed.

“Disconnected Youth” is a population identified by the June 2012 Youth Leadership Institute’s report to the White House. The group is comprised of young people between the ages of 16 and 24 who are not in school or employed.

More likely to end up living on the streets, becoming parents before they are ready and/or in our jails and prisons, these young people cost society $4.7 trillion, according to the Economic Value of Disconnected Youth researchers. We simply cannot afford to continue to ignore this growing portion of our population.

http://Paws4peopl...">Paws4people.org, an organization with a successful track record for creating successful rehabilitation and redemption programs for federal and state criminals, believes they can change the statistics. And I believe them.

Years later, grief stricken by the loss of her grandfather, Melissa started taking drugs to numb the pain of her loneliness and she began breaking into houses to pay for the drugs. She had several stints in rehab, but none took. Looking back, “[I] just wasn’t ready. [paws4prisons] has been the best rehab… Sometimes I wonder if [the paws4prisons staff] know how big an effect this has on us.”­­­

That’s a refrain I’ve often heard from veterans, trainers, parents of children and volunteers. For many of the inmate trainers, the caring from the paws4people team is remarkable.

“To have people that don’t even really know you … care, even though you are in prison and you have made all of those mistakes. [It’s] an amazing feeling,” explains Tiffany.

Dogs can make a difference that people can’t. Air Force veteran Sabrina Rigney of Lorton, looks forward to having a companion who will be persistent about getting her out of bed in the morning. “I can’t get mad at her for pulling the covers off me, because I’ve really got to get up and feed her and take her out.”

On this day, David Burry, managing director of the paws4people for-profit training arm, Paws Training Centers, is on hand to encourage and inspire trainers. “As a result of my greed and pride, I lost everything,” he tells the group. “I pled guilty to bank fraud, wire fraud and money laundering and I was sentenced to 151 months in prison. I now owe the government $41 million dollars in restitution and the IRS $12 million. I know that all sounds pretty grim, but in fact I’ve never been happier.”

Since serving his sentence, Burry, formerly an inmate trainer, has teamed up with his daughter, Ashley O’Hara, to train privately owned dogs as assistance dogs for qualified owners as well as to provide basic obedience and behavior modification for pet dogs in West Chester, PA. “It’s amazing to know that I’m making difference and helping others.”

Last year, Paws Training Centers were opened at locations across the country. These for-profit training centers provide employment for ex-inmate trainers and others and help to fund the work of the non-profit. One paws trainer is in Leesburg.

Trish, from the inmate side of the aisle, steps up to the podium and reveals a lifetime punctuated by abuse, rape and trauma perpetrated by family and foster care. It’s impossible not to want to reach out and give Trish a hug as she tells her story. But there is no touching at Lakin. A fellow trainer stands with her, but cannot comfort her. She appears relieved to return to her seat where she is surrounded by her four-legged support system.

Carol Hancock is the Veteran Client Advocate for paws4people’s “paws4vets” program. She became aware of paws4people when her son, who has Post Traumatic Stress Disorder, became a client. As veterans shift uncomfortably in their seats, Carol tells the story of her own family’s sadness and desperation before Tazie, a mixed breed dog rescued from Afghanistan and trained by paws4people, entered their lives. “Tazie is the difference between life and death for Jeff. Without Tazie, he would not have survived his darkest days with PTSD. Nothing was helping - not medication, not therapy, not our love. Nothing was breaking through that barrier of PTSD. Tazie has given him hope and laughter. She has given him a purpose in life.”

Sabrina Rigney of Lorton, a veteran, is at Lakin hoping to be matched with a psychiatric assistance dog. As a medic, she did one tour in Kuwait and then another in Baghdad. She described tending to a 19-year-old soldier as he begged her not to let him die. “You pretty much know that when they say that, they’re gone. I’ll never forget that,” she tells her audience.

After her third tour, back in Northern Virginia, Sabrina was scheduled to be a living kidney donor for a close friend, when her orders to redeploy for the fourth time came in. She declined redeployment in order to move forward with the kidney donation and was later denied the opportunity to re-enlist, after eight years of service.

Her pain is palpable as she describes what it felt like to lose her military family.

Sabrina suffers from PTSD. While she is employed as a paramedic, she often finds it difficult to be around people. Some days she can’t bring herself to leave her home. There are 22 suicides of veterans every day, she tells her audience. And three times, she was almost one of them.

When she began working with a therapist who included a therapy dog in their sessions, tiny pieces began to heal. Today she hopes that she will be matched with an assistance dog who will help her to get her life back.

Those listening to Sabrina on both sides of the aisle nod in sympathy and wipe away tears.

Two other veterans with PTSD tell their stories. All have military friends who have committed suicide. One says he lost more of his fellow soldiers to suicide after deployment than during combat.

By the end of the day, each veteran has been joyfully matched with a dog and trainers stand by proudly while pictures are taken. Later, there is time to socialize.

“It was really great to meet someone that has had a chance to get to know and love NOEL,” says Sabrina of Tiffany, one of the trainers of the golden retriever Sabrina has been matched with today.

Many of the trainers have had little encouragement in their lives. And it’s isolating to be in jail where inmates share stories of being abandoned by friends and family. But today, they bask in the applause for the difference they are making.

This is a three-legged stool of inmate trainers, dogs and clients – with the paws4people organization creating the right environment for each group to thrive as they travel their personal journeys of redemption and healing accompanied by the caring support of others and the unconditional love of dogs.

As trainers file out and the civilians behind them, there is a connection between those who sat on either side of the aisle that will remain forever unbroken.