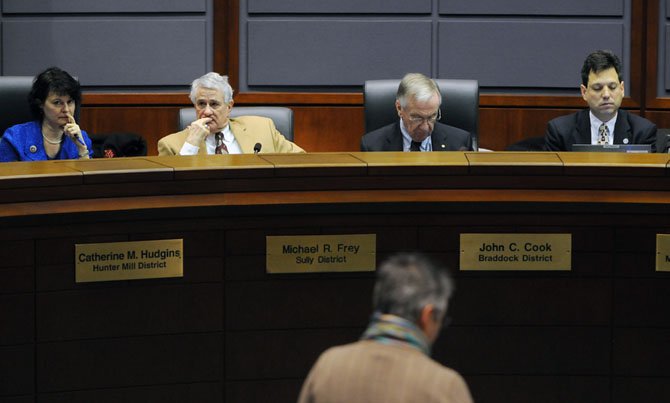 State Sen. Barbara Favola (D-31) and delegates Tom Rust (R-86), Ken Plum (D-36) and Scott Surovell (D-44) listen as Northern Virginia residents share their concerns, ideas and personal stories for what the Virginia General Assembly should take up in the next session. Photo by Robbie Hammer.

When it was Kenneth Gans’ turn to speak to the panel of Virginia state legislators, the 78-year-old father of a severely-disabled son kept his remarks brief. 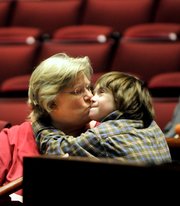 “You’re going to fix a problem by destroying a perfectly good place. This is absolute madness, a bloody disaster.”

— Kenneth Gans, a McLean resident whose son, Jeffrey, has been an NVTC resident for more than 40 years.

“This is absolute madness, a bloody disaster,” Gans said, shaking his head. “You’re going to fix a problem by destroying a perfectly good place,” Gans told lawmakers, referring to the closing of the Northern Virginia Training Center, where his son Jeffrey, 53, has lived for more than 40 years.

He was among nearly 25 parents, caregivers and stakeholders to plead with legislators to reconsider the timeline for closing the center, a state-run facility on Braddock Road which houses nearly 200 residents. The center is scheduled to close in 2015.

“We consider NVTC a miracle, a blessing,” Gans said. “My son Jeffrey is 53, but he will remain an infant the rest of his life. My greatest fear is that he will not survive for long in a group home,” Gans said.

During Saturday’s public hearing, 77 residents addressed the panel for nearly four hours on an array of topics. Fairfax County Board of Supervisors Chairman Sharon Bulova, who opened the public hearing, stressed the county’s need for additional funding for education and transportation.

“In Fairfax County alone, we have identified $300 million in transportation needs annually for the next 10 years,” she said.

John Horesji, coordinator for Social Action Linking Together (SALT), asked lawmakers to support a number of social policy reforms to help the state’s most vulnerable residents. He said SALT’s priorities include the expansion of Medicaid and banning the practice, through legislation, of shackling pregnant women in Virginia prisons.

Helen Kelly, a representative for the League of Women Voters of the Fairfax Area, pressed lawmakers to consider no-excuse absentee voting and online voter registration.

“Our vote is our voice. Let’s make sure Virginia’s voices are heard,” Kelly said.

But a recurrent topic for nearly half the speakers concerned the closing of the NVTC. They want legislators to slow down the timeline for shuttering the center, and to increase funding for Medicaid disability waivers. The waivers help families pay for medical services and equipment for those with intellectual or developmental disabilities.

The closing of NVTC is not a surprise.

“No artificial deadline is important enough to put any NVTC resident at risk. The purpose behind the [Department of Justice] settlement was for Virginia to make much needed investments in our community-based services, not to take away choices.”

LAST JANUARY, the Commonwealth of Virginia and the U.S. Department of Justice reached a settlement to close all but one of the state’s training centers for the developmentally and intellectually disabled. At the time, Supervisor John Cook (R-Braddock) and Chairman Bulova released a statement saying the county supports “community-based care,” but that it was “critical in this regard that sufficient funding is provided in order to make the transition successful.”

The question now, according to parents and stakeholders, is whether the state has sufficient funding to provide that quality community-based care.

“The waivers provide funding for services, but the state does not fund the waivers at a high enough rate to meet costs in the Northern Virginia market . . . ” said Cook, whose district includes the NVTC facility. “We believe that the state needs to increase the level of funding for the waivers.”

Rikki Epstein, executive director of the ARC of Northern Virginia, echoed Cook’s sentiments. She told legislators that while Virginia’s settlement agreement with the DOJ “provided us with a historic opportunity to reform the entire disability support structure in Virginia,” funding for disability waivers also needed reform.

Epstein urged the delegation to vote for waiver rate reforms that reflect “real and regional costs of providing services, so families can hire attendants who are able to stay on the job and to allow providers to support individuals with the most complex needs.” She said more than 10,000 Virginians will be stuck on waiting lists for the next decade unless the state provides “more waivers than the DOJ settlement requires.”

Kymberly DeLoatche, a Falls Church resident, told lawmakers about her family’s struggles with Medicaid waivers while standing with her 9-year-old son, Charlie, who has Down syndrome. She said the current Medicaid waiver program does not provide consistent, adequate care for her son. She told legislators that in the seven years her family has qualified for Medicaid waivers, Charlie has received just three weeks of the 24-hour daily care he needs.

“It sounds crazy, and it is. My job and my sanity depend on your actions,” she told legislators.

Vienna resident Jack Bruggeman told legislators his family is “reluctantly facing a new reality” regarding moving his sister Cathy, an NVTC resident for 30 years, to a new community home.

He gave legislators copies of a December letter from Mark Sites, chair of the Fairfax-Falls Church Community Services Board (CSB), which provides services for 88 individuals living at NVTC, that raises questions about the state’s timeline for closing the NVTC.

“I am holding in my hand two letters,” he told the delegation. “One I received just last Friday from Heidi Dix [the state’s assistant commissioner of developmental services]. In her three-page letter, Ms. Dix outlines an elaborate placement process for the transition of current residents of NVTC to community placements. This will be done starting July 1 of this year and continue into 2015 . . . ”

“I also have another letter,” Bruggeman continued “addressed to Governor McDonnell in which [CSB Chair Mark Sites] says there is not enough funding or enough time to develop adequate capacity and services for the transitioned resident of NVTC. So which of these two letters do I trust?”

“There is a lot of concern and discomfort among legislators about plans to close NVTC, especially on a very tight deadline,” Bulova said after Saturday’s session. “While I strongly support increasing community-based services, we also do everyone a great disservice if we close NVTC without the proper support and oversight to make sure that the level of care is equal, if not greater, than what is received at NVTC.”

Bulova said that he has been working on a resolution with state Sen. Barbara Favola (D-31) and Del. Eileen Filler-Corn (D-41) that would provide more General Assembly oversight over the transition process, including establishing some benchmarks for what would make families comfortable with moving forward.

“If those benchmarks aren’t being met, and adequate funding hasn’t been dedicated, we really have an obligation to also re-examine the timeline for closure. . . . No artificial deadline is important enough to put any NVTC resident at risk. The purpose behind the DOJ settlement was for Virginia to make much needed investments in our community-based services, not to take away choices.”

ANOTHER CRITICAL ISSUE, according to Cook, is that the community group homes for NVTC residents simply do not exist.

“The state has not developed a plan for creating them,” Cook said. “It takes $1 to $1.5 million to convert a regular house to a group home that is fully accessible and has all the necessary equipment to serve this population.”

“Our system ought to be designed to provide a continuum of care that is appropriate to each individual. That definitely means change,” Bulova said. “I believe that there is room for common ground—and that is what I am aiming for during the General Assembly session.”