Center provides care to more than 150 residents with disabilities. 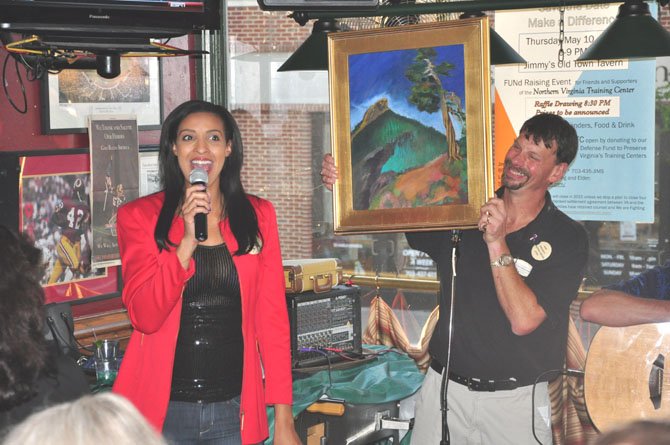 Herndon — Susan Infeld, a registered nurse, remembers vividly the night she knew she had to get involved with the Northern Virginia Training Center. She was working as a hospice nurse at a local hospital when a patient from NVTC came in suffering from pneumonia in the middle of the night.

"We eventually had to put him on a ventilator, but he had a ‘Do Not Resuscitate,’" she said. "This man’s parents were elderly and not in the state, and we couldn’t get a hold of them. So we called the center to tell them the situation, and they said ‘wait.’ Soon a physician, social worker, nursing assistant and the director of nursing showed up at the hospital to be with him as he died," she said. "We all stood around this man, holding hands and praying as he died surrounded by the people who had cared for him over the past dozen years. In all my years in the medical profession, I’ve never seen that kind of compassion and concern so far above and beyond what anyone could expect."

Located in Fairfax on Braddock Road, the Northern Virginia Training Center houses residents with intellectual and other disabilities, but is currently in danger of being shut down.

In August 2008, the Department of Justice began an investigation of the Central Virginia Training Center, located in Madison Heights, Va. The investigation was broadened in April 2010 to examine Virginia’s system of services for individuals with intellectual and developmental disabilities, which included all five training centers around the state.

A findings letter submitted in February 2011 by the DOJ concluded that the state "fails to provide services to individuals with intellectual and developmental disabilities in the most integrated setting appropriate to their needs in violation of the ADA (Americans with Disabilities Act)."

In March 2011, Virginia entered into negotiations with the DOJ to reach a settlement and an agreement was made Jan. 26 of this year. The settlement includes the closing of four of the state’s training centers by 2020, with the Northern Virginia Training Center scheduled to close in June 2015.

"If these patients are released, we’re going to see them cycling in and out of area hospitals for various afflictions and it’s going to be a huge financial burden on the state," Infeld said. "This is the time when we all need to come together and defend those who can’t speak for themselves."

Jane Anthony, co-president of the Northern Virginia Training Center Parents and Associates and mother of a resident of the NVTC, also says closing the centers will impose a major burden.

"If they do close as planned the community group home capability will be stretched and taxed beyond their capabilities. The 1,000 residents of Training Centers across the state who still reside there are the most difficult to care for and ‘place’ outside the Centers," she said. "Many like my own son need 24/7 medical oversight which is not affordable or doable in the four person group homes that are planned. The infrastructure is not there and it takes time and money-- Virginia is 47th in the nation in providing services to those with intellectual disabilities--to build. The money savings for this level of complexity are not there, and the state will only find in the future that the costs escalate."

IN A STATEMENT announcing the settlement, Gov. Bob McDonnell spoke in favor of a community-based system for caring for patients, calling the training centers "the most costly and restrictive form of services available."

But many families of patients at the NVTC say closing the centers will have the opposite effect.

Anthony’s son, Jason Kinzler, is 36 and has Angelman Syndrome, a spontaneous mutation genetic disorder which leaves his mind at the 6-month-old to one-year-old level, has almost no pain threshold, is not toilet trained and tends to put items in his mouth that could become choking hazards. Kinzler recently ate 11 inches of his quilt, and was found picking at a sore in his elbow to the point of pulling arm tissue out of the wound.

"Jason’s care at NVTC is exemplary. Most of his direct-care staff have been with him for more than 20 years and hence understand his condition, can anticipate risks and know his needs," Anthony said. "Community placements, especially group homes are not designed to prevent Jason from chewing on light cords, pulling heavy objects down upon himself or choking on small parts he could bite off...Most locations in a group home would pose excessive hazards, and for his own protection, he would become a virtual prisoner in his own ‘home.’"

Pat Bennett of Vienna knows how important the Northern Virginia Training Center has been for her family. Her daughter Ginny has been there since she was 7. Ginny has cerebral palsy and several other intellectual disabilities.

Her daughter is now 45 and Bennett gives credit to the NVTC for her daughter’s longevity.

"She requires 24 hours a day, seven days a week, 365 days a year care and the staff are remarkable human beings, and they’ve been there a long time, which is important for stability," she said. "People have come from all over to study the longevity of the patients, it’s really a phenomenon."

Bennett and her husband, both in their 70s, have discussed what their options will be if the NVTC closes. 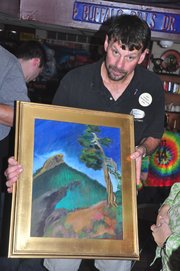 Jimmy Cirrito, owner of Jimmy’s Old Town Tavern in Herndon, holds a painting to be auctioned off during a fundraiser for the Northern Virginia Training Center Thursday, May 10.

"Bringing her home would be the most restrictive thing we can do," said Bennett. "At the center there are a host of activities and programs she can participate in every day."

Karen Schupak’s brother also suffers from cerebral palsy and epilepsy, and has been in a Virginia Training Center for more than 40 years. She knows without a doubt that her brother would not be alive without the efforts of the centers.

"They’ve given my brother so much love and compassion, so much affection, it’s just off the charts," she said. "And he’s never had so much as a bedsore, never dirty, he’s never smelled. My daughter, who’s 12, pointed out how she could tell how much respect the patients are given."

Schupak agrees that it would be impossible for her brother to find the level of engagement he currently has anywhere else.

"They take him on outings, he goes to workshops, he’s not stuck in his room all day, we can visit him," she said. "If the center is closed, there will be nothing for him, he’ll probably just end up in a nursing home."

THE CLOSING OF THE CENTERS is not yet a done deal. The judge has not approved the settlement that would close the center.

The NVTC Parents and Associates have hired legal counsel to represent them. On Thursday, May 10 they hosted a legal fundraiser at Jimmy’s Old Town Tavern in Herndon, which raised almost $7,487, bringing their total raised to $14,531.

There was reason to celebrate at the fundraiser, as on Wednesday, May 9, U.S. District Judge John Gibney granted the group’s motion to intervene, allowing the families to be a part of the process.

Gibney wrote that "the existing parties in this litigation do not adequately represent the rights and interests of the Petitioners," and his decision will allow the families to have rights as parties to the litigation.

There are currently 13 families of training center residents, though they will be filing a motion for class certification that would allow all families in similar situations to be included. Gibney’s May 9 decision will allow families to participate and present evidence to the court.

"This decision basically means we’ve won game one, but we haven’t won the pennant yet," Anthony said. "But now we are at the table, which is a very good thing."