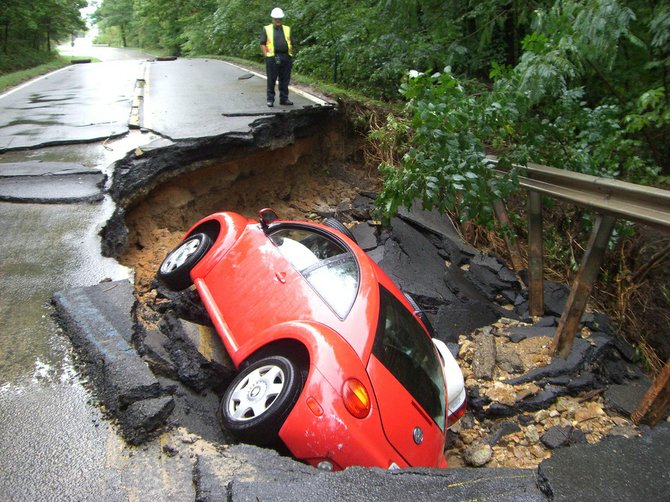 A VDOT crew member assesses damage to Lorton Road after Tropical Storm Lee in Sept. 2011, which destroyed three bridges on secondary roads, damaged pavement on dozens of roads and cost the state $10 million in transportation funds. By law, Virginia must repair damaged roads before spending money to build new ones. Photo Contributed by VDOT

After a week in which news from Richmond was dominated by partisan skirmishes, Northern Virginia Del. Dave Albo (R-41) joined with other lawmakers to refocus the legislature on the state’s transportation funding crisis, presenting an alternative to a controversial plan proposed by Governor Robert McDonnell (R).

“It’s like trying to make a pizza. The governor has given us a pizza with pepperoni and pineapple. But we don’t like pineapple. We’d rather have sausage…”

The day before the start of this year’s legislative session, McDonnell unveiled a proposal to increase funds for transportation by up to $500 million with a sales tax increase. But his plan completely eliminated the gas tax, which has been set at 17.5 cents per gallon since 1986 and currently funds about two-thirds of the state’s transportation funding.

Many Democrats, and some Republicans, derided his plan as “nonsensical.”

The proposal put forward by Delegates Albo, Joe May (R-33) and Tom Rust (R-86), is more complex than the governor’s plan, but also includes both tax increases and cuts.

ALBO’S PLAN includes raising the sales tax by a half cent per dollar, indexing the gas tax to inflation, and increasing charges on alternate fuel vehicles. Combined, these measures would increase state transportation funding by $506 million, say its sponsors.

To soften the impact of these increases, the amendments would also eliminate the 2.5 percent food tax, which Albo said would net savings of $99 a year for a family of four with an annual income of $40,000.

While the elimination of the food tax would reduce general fund revenues, which are distributed to local governments, the delegates say the shortfall will be made up with new taxes on out-of-state corporations who provide services in Virginia. They also plan to collect sales taxes on out-of-state retailers who sell to Virginia residents through the Internet.

The Internet sales tax collection is dependent upon the passage of the Marketplace Equity Act, currently pending before the U.S. Congress.

The Albo/May/Rust plan will also create an opt-in option for local governments where they can receive additional transportation funds via a half cent sales tax which will be raised and spent exclusively in that local area. Rust highlighted this point, stating that, “with this option, decisions will be made locally as to where is best to invest in transportation infrastructure.”

Immediate reaction from state and local elected officials was much more positive than to the governor’s plan.

“I need to learn more, but I commend these guys for thinking outside the box,” said Senator Chap Petersen (D-34), who strongly opposed the governor’s plan to make Virginia the first state in the nation to eliminate the gas tax. “I actually would favor a reduction in the meals tax if we can find the revenue elsewhere, since those taxes, in my opinion, do have an impact on local, small businesses.”

“This is certainly an improvement over the governor’s original plan,” said Supervisor Jeff McKay (D-Lee), who was recently appointed chair of the Northern Virginia Transportation Commission (NVTC). McKay said the county was still analyzing the details, but “on its face this seems to be a more fair way to raise revenue. I think there is more to do, but this is a step closer to a bill that could be supported. We need action this session on transportation and I am glad the dialogue continues.”

Supervisor John Cook (R-Braddock) said Albo’s amendments offered a “truly new” source of revenue, and said it was a positive development for Fairfax County. “Giving Fairfax the opportunity to raise local funds to be spent totally in Fairfax is something I have advocated for some time,” Cook said.

He added the amendment also “brings extra transportation revenue through the sales tax, and yet it gives homeowners a break by eliminating the sales tax on food while restoring the general fund by taxing out-of-state businesses.”

In 2017, Virginia faces its own “fiscal cliff,” the year transportation official forecast the state will run out of money to build new roads.

According to the Virginia Department of Transportation, the state needs billions of dollars to repair, maintain and expand its aging and overburdened transportation system. However, because of persistent revenue shortfalls, money intended for new highway construction has been used to pay for road maintenance needs, which, by law, is the state’s first funding priority.

“There is no question that funding for Virginia’s transportation needs is sorely lacking,” Hugo said in a statement supporting the governor’s plan. “We need to think of innovative new means to fund transportation that do not gouge the taxpaying public.”

Hugo said Tuesday that while he applauded “my fellow delegates for putting forth alternative proposals, the reality is that the gas tax is a diminishing form of revenue.

“The governor's proposal will eliminate the gas tax and replace it with a revenue neutral sales tax that will 'stop the bleeding' on the transportation trust fund,” Hugo said. “I look forward to working with all of my colleagues to create jobs and improve our quality of life in Virginia.”