Traveling Down A Familiar Road
Votes

Traveling Down A Familiar Road 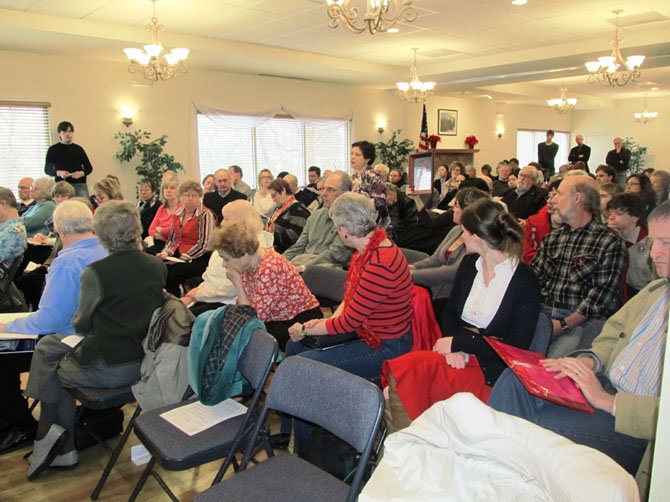 “The biggest example of ‘tragic mismatch’ since I wore madras slacks and white socks in 1980 to my first middle school dance.”

If Petersen has anything to say about it, this year’s short legislative session will be big on the issue of transportation funding.

During a standing-room-only town hall meeting at Vienna’s American Legion Post 180 on Saturday, Petersen and Del. Mark Keam (D-35) made it clear they intend to fight McDonnell’s “nonsensical” transportation plan, which the governor announced Jan. 8, on the eve of the General Assembly’s 30-day session.

“Eliminating our traditional road funding because cars are more efficient makes about as much sense as canceling your child’s college fund because tuition keeps rising.”

“The ‘justification’ is that the gas tax at a fixed rate brings in less money in our hybrid age. But that hardly seems like a reason to jettison it,” Petersen said.

“Eliminating our traditional road funding because cars are more efficient makes about as much sense as canceling your child’s college fund because tuition keeps rising.”

In a statement released last week, McDonnell said his plan—which would make Virginia the first state in the nation to eliminate the gas tax—“is a sustainable, long-term solution that will fund our transportation network for decades to come.”

“It provides over half a billion more dollars in highway construction funding each year and eliminates the structural deficit by 2019. In fact, our plan puts $3.1 billion more into transportation in Virginia in just the next five years,” McDonnell said. 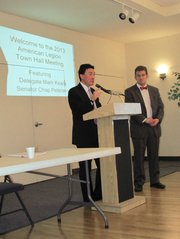 PETERSEN told the nearly 200 constituents at the town hall meeting that his response to McDonnell’s plan was not merely “knee-jerk partisan opposition.” He gave points to McDonnell for “starting the conversation” on ways to improve Virginia’s crumbling transportation network, which is set to run out of money for construction by 2017.

Petersen said he did not doubt McDonnell’s “good intentions.”

But calling for a 16 percent increase in the state sales tax on all goods, in place of the current per-gallon gasoline tax, was not the way to do it, he said.

Petersen said it just didn’t make sense to raise sales tax—a general tax on all residents, many of whom do not use roads—while many out of state residents passing through Virginia use the state's highways for free.

“Of course, the retail sales tax is paid directly by the consumer. In that sense, it is far more onerous on citizens than the gas tax which is an input cost on a product, such as gasoline, which is ‘priced to market.’ That’s why the level of gas tax has little if any effect on the price consumers pay at the pump,” Petersen explained.

Petersen said the “real story” is the discontinuing of “user fees” to fund transportation—and instead making our roads and transit projects just another item in the state general fund. “That is a startling turn of events,” he said.

“By ending user-based financing and pushing our road costs primarily to general taxes, the governor sets up an annual clash between transportation and the funding of public schools, health providers, and first responders, to name a few,” Petersen said, adding that the governor’s plan also ensures that out-of-state highway users will use our highways for free, since the gas tax is the only way the state has to capture that revenue.

“My biggest problem is that if you take a general tax and increase it on everyone, that ought to be the last resort and not the first resort,” he said to applause.

Since the governor’s announcement, Democrats, and even some Republicans, have come out in force against McDonnell’s plan. Senate Majority Leader Richard Saslaw (D-35) said “I think that thing is so dead it’s unbelievable.” Peterson, however, is the only Fairfax senator to introduce his own legislation that would adjust (or index) the gasoline tax, currently 17.5 cents per gallon, based on the fuel efficiency index, rather than eliminate it.

“Thankfully, the legislature will have a chance to weigh in the next six weeks,” Petersen said

Keam, who filed a total of 14 legislative measures when the legislature convened Jan. 9, introduced his legislative agenda and took questions on a number of topics.

As a member of the House education committee, Keam said he was opposed to the governor’s plan to have a constitutional amendment authorizing charter schools, allowing local school districts to decide when to allow a new charter school, without needing state Board of Education approval. McDonnell has long been a proponent of charter schools, and said Wednesday that Virginia has "one of the weakest public charter schools laws in all the country.”

Keam said he thought charter schools should meet a gap, and not replace an existing system.

Del. Mark Keam (D-35) talks to Rikki Epstein, director of The ARC of Northern Virginia, who attended Saturday’s town hall meeting to support Virginia’s transition to a community-based care for those with intellectual and developmental disabilities.

He received applause when he told the crowd that the governor’s plan to hold schools accountable by giving each school a letter grade was “stigmatizing the schools our children go to.” Instead, he said, the governor should consider grading the state’s transportation network. “I'd like to see some off-ramps get some F's,” Keam said.

Walter Basnight, a member of the Town of Vienna’s planning commission, asked what lawmakers plan to do about the area’s increasing traffic headaches, especially on Route 123.

“It’s a nightmare now and it’s going to be a nightmare when Tysons gets here,” Basnight said. “We need some support from the state as well.”

KEAM said one of his bills—HB2141—would “increase transportation maintenance funds for highly used roads, such as Maple Avenue.”

Several residents asked Keam about his plan to help McLean residents avoid higher taxes resulting from the county's plan to increase property taxes in Tysons by 7 to 9 cents to fund the area's $3.1 billion redevelopment.

Keam said that while he fully supported the idea of redeveloping Tysons Corner into Fairfax County’s “new urban downtown,” he thought it was “unfair” to tax residents the same as commercial property owners who would directly benefit from the redevelopment. He noted many Tysons residents already pay a real estate tax, storm water tax and pest management tax.

Keam said he introduced legislation—HB2131—that would give the Fairfax County Board of Supervisors “every legal tool possible” to either completely exempt residents who live in special tax districts or require that they be taxed at a lower rate than businesses in those districts.

He cited residents of The Rotonda as among those who would be unfairly taxed in the new district. The Rotonda, a gated condominium community of five 10-story buildings built in 1978, has nearly 1,200 resident units on 35 acres near Tysons and Tysons Galleria.

“The Rotonda is home to many senior citizens who live on a fixed income. All of a sudden they have to pay for new schools, playgrounds, sidewalks? For that group of constituents, I think a new tax is blatantly unfair. I’m going to do everything I can to provide relief. For new residents? They are on notice.”

Another topic of concern was the potential closure of the Northern Virginia Training Center (NVTC). Several parents, who have adult children at the NVTC, asked Petersen and Keam to lobby lawmakers to keep the center open until the community could safely support a transition to a community-based home.