Aluminum statue to be placed in front of Hyatt at Reston Town Center. 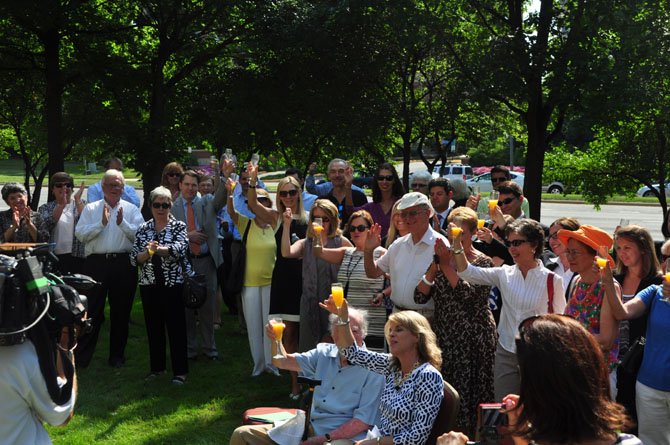 Supporters of the Initiative for Public Art-Reston, toast to the latest project Wednesday, June 26 at Reston Town Center. Photo by Alex McVeigh.

Reston — The Initiative for Public Art-Reston gave a preview of its latest project Wednesday, June 26, with a presentation of the sculpture that will soon be placed in the park across from the Hyatt Regency Reston in Reston Town Center.

Sculptor Mary Ann Mears was chosen to design the piece, which will be a 20-foot tall yellow sculpture made of aluminum.

“There were a number of goals identified by the community. The idea of the piece as being a gateway piece, a signal that you’re coming to something, to build anticipation, is for someone driving a car,” Mears said. “There’s also the goal of attracting people to use the park more, to help create a setting.”

IPAR decided in 2011 that they wanted to place a statue there, and after coordinating with various local and county agencies, Mears, who lives in Baltimore, was selected. 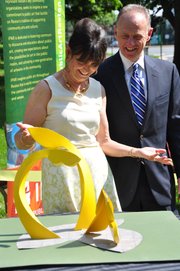 Sculptor Mary Ann Mears shows Hyatt Regency Reston Manager David Eisenman the model of her sculpture, which will be placed across from the hotel by the Initiative for Public Art-Reston.

“The site for the sculpture is a park that’s a very natural environment with meandering paths and beautiful plantings and an informal kind of layout, yet it’s right next to Reston Town Center, which has much more formal, large-scale architecture,” she said. “To somehow come up with a sculpture that would fit both this newer development in Reston, but also fit and integrate and flow into the natural setting was very important.”

Present at Wednesday’s ceremony was a scale model of the piece, the actual piece is currently being fabricated in Baltimore. Part of the sculpture will also include a blue stone patio underneath.

Present at the introduction to the piece was Reston founder Robert Simon. Simon, who expressed the need for public art in his founding principles, credited Joe Ritchey, board chair and president of IPAR, for helping get it off the ground.

“We had all those years with no art at all, and out of left field, Joe got the notion that there should be a plan for public art, and he got it started, funded it and the reason we’re here today is because of him,” he said.

David Eisenman, manager of the Hyatt Regency Reston, said he has high hopes for the sculpture and its location.

“I’m confident that this initiative will continue to play a role in inspiring our community’s culture and that it will foster support for many more projects to come,” he said. “This sculpture will transform this park into a very special place to be.”

Barbara Rovin, Reston Town Center Association, said she hopes this is a first step to much more public art in town center.

“Art of many kinds is part of the vision of RTCA, and as one of the founding members of the Initiative for Public Art, it feels like it’s been a long time leading up to this day,” she said. “There have been many steps and many people involved, and a wonderful creative process, and we’re all very, very proud of this effort, and now we can start thinking ahead to the next ones.”

Site preparation for the installation is likely to begin around August.