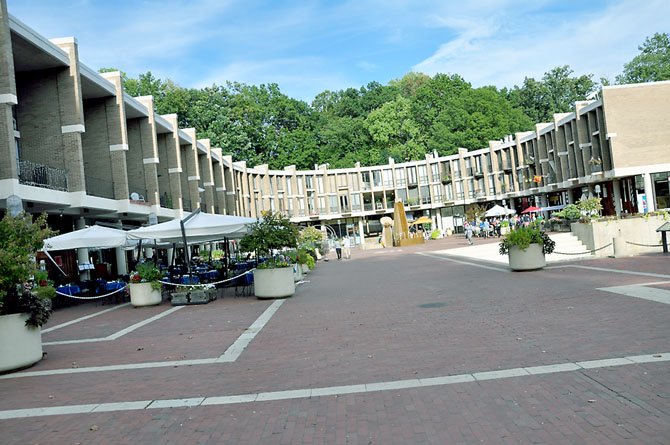 The Lake Anne Plaza was designed to balance design and art that the community could interact with. Photo by Alex McVeigh.

Reston — In his founding principles for Reston, Robert Simon mentioned the need for public art several times. The Initiative for Public Art-Reston presented a history of public art in Reston Saturday, Sept. 15, celebrating several major art projects that form the core of Reston. 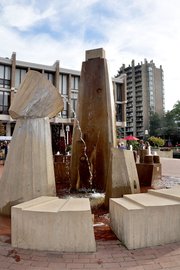 The fountain at Lake Anne, one of the first public art projects in Reston.

“I always said the definition of community is the interaction of people,” said Simon. “And the art built here is designed to foster that interaction, in public places.”

Director Rebekah Wingert-Jabi, a Reston native, created a short documentary about the development of public art in Reston.

“I grew up in Reston, and in no small part due to public art, I spent a lot of time at Lake Anne,” she said. “The boats, the fountain, the underpass. These things were not only fun to be around, they were an inspiration.”

The fountain at the center of Lake Anne was one of the first examples, as well as the interactive concrete pieces surrounding the plaza. They were created by Gonzalo Fonseca, a sculptor and James Rossant, an architect.

“Reston was the first instance of my father breaking into his own idiom,” said Caio Fonseca, son of Gonzalo, who died in 1997. “He used to always say that work involved serious play.”

The concept of serious play inspired the sculptures at Lake Anne, ones that could be climbed in, on and over by anyone walking along the plaza. They also created oversized replicas of real life items for the businesses, such as a barber pole, or the common items that line the outside of the pharmacy, which still exist today. 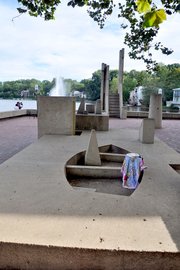 Part of the interactive art at Lake Anne, which was designed to help foster interaction between community members.

“We didn’t really think of it as art when we were designing the plaza, just as shapes and designs that went together and complemented each other,” said Bill Conklin, an architect who helped design the plaza. “It was all about fitting the big parts, the buildings, in with the little parts, the ‘art,’ and fitting them together.”

While Lake Anne was the first village center in Reston, the others didn’t quite follow suit in the design department, much to Simon’s chagrin.

The film also examined the history of the Mercury Fountain at Reston Town Center, which was built by Brazilian sculptor Saint Clair Cemin. Cemin called building the fountain one of his greatest adventures.

“I made a model and brought it to Italy to be constructed. The bowl is one piece and the spiral is two, and it was assembled onsite,” he said. “I chose Mercury because it is the god of commerce and communications, and I made him stand on the fountain a little off balance, because I think we’re all always trying to find a balance.”

IPAR is hosting the latest exhibit at the Reston Museum, entitled “Reston: The Art of Community.” It includes the film, as well as chronological pieces describing the history of public art in Reston. It will