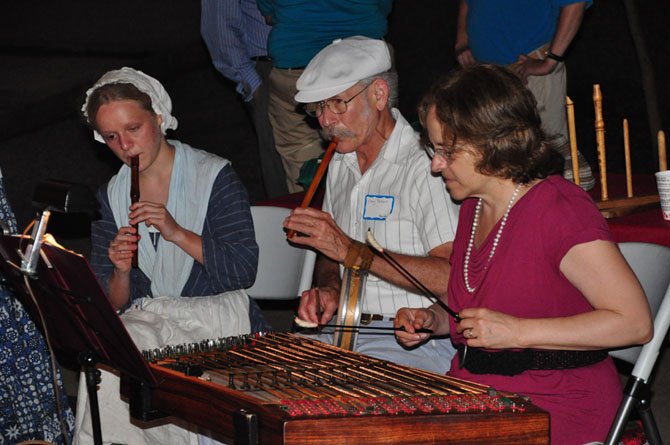 Claude Moore Colonial Farm opened its doors on July 26, 1973, with the idea to show what life was like 200 years ago. Forty years later, it still provides a glimpse of daily life for farmers in 1771.

The farm welcomed friends and longtime volunteers to celebrate the last 40 years and look to the next 40 years Thursday, July 11.

“What’s great about this gathering tonight is that it’s a dynamic example of what determined, purposeful, dedicated people can do when they put their mind to something,” said Margi Vanderhye, president of the Friends of Claude Moore Colonial Farm. “They find opportunities where they can see them, overcome obstacles that get in their way and they achieve a result that people wouldn’t believe possible, just like those farmers back in 1771.”

Vanderhye presented Anna Eberly, director of the farm, with a gift: a book containing an oral history of the farm’s last 40 years. 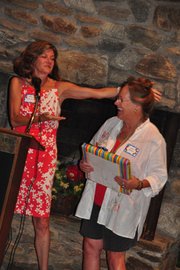 Margi Vanderhye, president of the Friends of Claude Moore Colonial Farm presents farm director Anna Eberly with a history of the farm to celebrate the farm’s 40th anniversary Thursday, July 11.

CLAUDE MOORE was established by the National Park Service after they determined there was a need to portray the lives of ordinary men and women involved in colonial agriculture.

It became privately operated through a cooperative lease agreement in 1981, the only such privately operated park in the National Park Service. Since 1981, the Friends of Claude Moore Colonial Farm has invested more than $2 million in the park, including complete infrastructure upgrades.

Claude Moore hosts seasonal market fairs, a well as more than 100 different education programs and products. This year they launched a rail splitting program that has provided true Revolutionary era fencing for the grounds, and they are launching a woodland husbandry program to catalog native and invasive plants.

The park features eight full and part time employees, and more than 300 individual volunteers and 35 groups provide more than 20,000 volunteer hours per year. 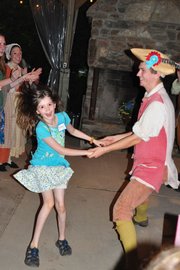 “The people are the highlight of this farm. Our hundreds of volunteers make it a special place with their energy and enthusiasm. Not only do they come up with the ideas, they turn them around fast,” Eberly said. “We have volunteers who have served here for all 40 years, or 35 years, we have families with their third generation of volunteers.”

John Toups got involved with the farm in the early 80s, when Rep. Frank Wolf (R-10) solicited the McLean business community for support.

“We first came together in the early 80s to give financial support to the farm, and I think we’ve helped it remain a special place,” he said. “This place has always had great support from the people who decided to get involved.”

One of the longest tenured volunteers is Jinks Holton, wife of former Virginia Governor Linwood Holton. She first visited the farm as part of an overnight camping group.

“As soon as I came here, I saw how much fun the place was, especially with all the animals and the way they connected with the children,” she said. “After a while, you’d get to know the animals, get a sense of their personality. At times it seemed like they knew you, they would welcome you every time you came to the farm, especially the pigs. I also learned how to make apple butter right here on the farm.”

Holton said she believes the farm is a valuable resource to children from around the region and beyond.

“For children these days to see how children lived in 1771, to see how early they had to get up, how hard they had to work just to cook breakfast, it’s very important,” she said. “I think a lot of adults should learn it too.” 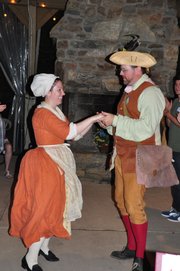 FOR THE FARM’S NEXT FOUR DECADES, and beyond, Eberly said she hopes to see a continuation of the last four, with one change.

“I’d like to see this place achieve some form of financial independence, a strong financial backbone,” she said. “We’ve spent a lot of time living hand-to-mouth over the past 40 years, and we’ve been able to not only survive, but flourish, and all we can ask for is for that to continue.”

As someone who has seen the farm expand from the original farmhouse to 52 different buildings, Holton has a simple vision in mind for the next 40 years.

“In 40 years, I’d like to see this place exactly the way it is,” she said. “I’m sure everything around it will have changed a whole lot, so preserving this place will be that much more important.”