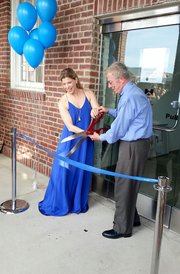 Metropolitan School of the Arts President and Founder Melissa Dobbs saw the news as a call for help, and a blessing of an opportunity: In mid-June, 2012, a story appeared in the newspaper explaining that the Workhouse Arts Center in Lorton was in a financial crisis.

On the site of a rehabilitative-concept prison during the Progressive Era, re-imagined campus buildings are occupied by between 60 and 70 visual artists at a time—instead of inmates. But the urban space model that works so well for Old Town Alexandria’s Torpedo Factory (an inspiration for the current Workhouse’s founders), hasn’t been as successful in Lorton since the Lorton Arts Foundation re-opened the Workhouse in 2008.

President and CEO John Mason essentially put the call out for any interested entrepreneurs who were willing to come assist in revitalizing the campus.

For Dobbs, it was as if Mason was speaking directly to her.

Photo contributed by the Metropolitan School of the Arts

Young girls pose in a MSA studio dance class, now being offered in a new location at the Workhouse Arts Center.

AFTER SEARCHING UNSUCCESSFULLY for an opportunity for her daughter (a rising freshman) to pursue a genuinely arts-focused education in the DC metropolitan area, Dobbs conceived of expanding her thriving performing arts studio program of roughly 90 instructors and 1,000 students into a full-fledged school.

“We decided to approach [Mason] with the concept of transforming this campus into a private high school,” said Dobbs, “that offers boarding for pre-professional artists who want to pursue arts as their career, or really just want to focus on arts seriously.” 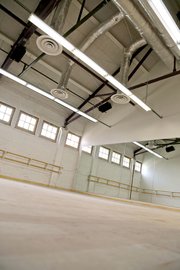 Photo Contributed by the Metropolitan School for the Arts

This MSA dance studio in Workhouse Building W-4 is part of the campus transformation into a performing arts high school.

With the promise of steadily increasing rent money over the next 35 years (five seven-year leases) and the willingness to contribute $350,000 to renovate and build out Workhouse Building W-4 for the current main studio spaces, Dobbs’ proposal offered Mason and the Workhouse a much-needed life-preserver.

Not to mention the additional music, theater and dance programming offered by MSA’s studio presence is rounding out a significant artistic imbalance on campus.

“MSA brings an enlargement of performing arts programs,” said Mason, a Fairfax resident, “that is very much within our mission. It’s an area we’ve been constrained by: We’re an arts center that’s intended to have the range of arts disciplines. We’re good in visual arts—65 studios, two major galleries—but in performing arts, we’ve been very limited.”

AS A SUB-LESSEE of the Lorton Arts Foundation, the future of the MSA at the Workhouse is tied to the host’s financial stability.

“We paid for the entire build out,” said Dobbs, “but got no guarantee from LAF. That was the massive risk we took. This tells you how committed we are. We know this is going to work. We know this campus is meant for a school.”

For Dobbs, the vision for the school is clear, and the concept is well underway towards becoming a reality.

For the academic year beginning this fall, before brand new dorms are constructed and the property is rezoned to facilitate high school education, a maximum of 20 students will take part in a day program with integrated “high-level condensed academics that would eliminate the need for lots of additional busy work,” said Dobbs.

Until greater numbers and different zoning would allow for a more conventional classroom environment, MSA will offer pre-developed curriculums for individualized learning tracks, supplied by the accredited online school Laurel Springs based in Ojai, Calif.

Dobbs is also planning to meet with both the president of the renowned Interlochen Center for the Arts in Michigan and the Walnut Hill School for the Arts in Massachusetts for additional consulting on developing a comparable institution.

Photo Contributed by the Metropolitan School for the Arts

MSA studio tap dancers give a performance on the W-3 building stage at the Workhouse Arts Center in Lorton.

COMPLEMENTING THE HIGH SCHOOL THIS FALL will be an artistic and wellness-centered after school program that will have local children bussed to campus directly from their elementary schools.

“It adds a liveliness,” said Mason, “and it brings their parents and grandparents. Here’s more people introduced to the Workhouse Arts Center.”

In addition to supplying more youthful energy, Dobbs’ future plans for campus include building out additional spaces for performance stages, a cafe, classrooms, and, perhaps, a pool and fitness center. With an annual tuition set to top out around $30,000, it’s reasonable to set expectations high.

Dobbs acknowledged the goals are lofty, but attainable and necessary. “It’s a lot,” she said, “but I’m so grateful to be here, to be in these buildings. To see a place that was housing such anger, resentment and despair turn into something that’s so positive is just wonderful. We’re going to continue to attract people who want to make this place what it was set out to be.”

Judging by the studios already full of children singing and gracefully galloping around Workhouse Building W-4, it’s clear they’re well on their way.