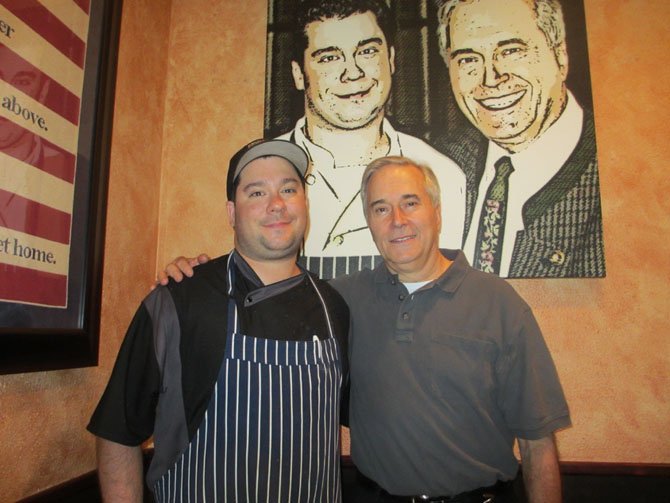 Maplewood Grill, co-owned by father and son Marcel and Chef Paul Kuchler, is one of Vienna’s most community-spirited businesses.

The years that Chef Paul Kuchler spent at the sides of the classical chefs who worked his father’s kitchen at Le Canard paid off.

“We try to create a place where people come to relax, enjoy themselves, listen to live music, while receiving the most professional service and first-class food.” —Maplewood Grill co-owner and founder, Marcel Kuchler

Kuchler now is co-owner and head chef of Maplewood Grill, designing the menu, perpetuating some of Le Canard’s traditional recipes, refining new signature dishes and overseeing the kitchen details of Maplewood Grill. It was Marcel Kuchler’s idea to reinvent his French restaurant as one with a contemporary American spin and his son Paul took off with the concept.

“We try to create a place where people come to relax, enjoy themselves, listen to live music, while receiving the most professional service and first-class food,” said Maplewood Grill co-owner, Marcel Kuchler.

“This was my chef school over my lifetime … I worked with about five different classical chefs, so, I learned things from each of them, some good, some bad, but I took the best from each of them.”—Head Chef Paul Kuchler, Maplewood Grill

Paul Kuchler was just 6 years old in 1985 when his parents opened Le Canard in Vienna, a French restaurant serving classical French cuisine. His father Marcel was a fixture in the dining room, charged with ensuring his guests were served high-quality dishes with gracious professional service. Le Canard is gone now, as is the classic French cuisine, but the Kuchlers maintain the same high degree of guest service and fine dining with a contemporary American accent.

Marcel Kuchler [right] and his son Chef Paul turned their classical French restaurant into a contemporary American-bent one, Maplewood Grill.

“This was my chef school over my lifetime,” said Chef Paul, who recently turned 34 years old. “I worked with about five different classical chefs, so, I learned things from each of them, some good, some bad, but I took the best from each of them.”

When he was legally old enough to work in the restaurant, Chef Paul started off as a dishwasher, and, two years later, was promoted to salads. Each step of the ladder, he learned more about the business, about the kitchen, about food preparation and cooking.

“Nobody gave me anything even though my father owned the restaurant,” said Chef Paul. “I still had to work my way up. My dad loved me and wanted the best for me, that’s how I learned the business.”

CHEF PAUL does not cut corners in his preparation; that’s not the way he was taught.

The Bordelaise sauce that tops one of the restaurant’s popular dishes, filet mignon, is made from scratch.

Chef Paul makes his Bordelaise sauce, the “mother” sauce, the old-fashioned way. It’s a two-day project, from roasting veal bones to roasting vegetables, deglazing with wine and combining veal stock. He could buy demi-glace, he says, but he and Marcel insist there is no substitute for the authentic base.

The onion soup recipe goes back to Le Canard. Calf’s liver and escargot remain on the menu. “A lot of people really like our schnitzel,” said Marcel.

But Chef Paul kicked up the verve with local products, seasonal produce and creative mergers of flavors.

“When tomatoes are at their peak, that’s when we incorporate tomatoes into our menu, such as tomato and mozzarella salad. We buy as much locally-sourced as we can.”

The corn is local and the crabs come from Chesapeake Bay. Now that the Vienna Farmers Market has opened for its season, Chef Paul shops there for fresh spring produce.

Maplewood Grill’s shrimp and crab poppers won “best of Vienna” appetizer on a Vienna Patch poll in 2012. The kitchen team is flexible with food requests, too. Chef Paul said the restaurant can make many dishes that usually have meat or fish vegetarian. “There are a lot of options. We can make risotto with fresh vegetables, especially now with all the local vegetables coming in.”

On most nights, there is live music at Maplewood Grill, something unique in Vienna. It’s a go-to place before Wolf Trap concerts and luncheons. The interior’s configuration lends itself to groups while not intruding on other diners.

The terrorist attacks of September 11 impacted business and it was out of economic prudence that Paul moved from sous chef to head chef. Paul was just 21 at the time but he proved his capabilities to his father, and, two years later, Marcel gave Paul part of the business. It was still Le Canard then. He and dad Marcel co-own and run Maplewood Grill together.

Le Canard served its last dinner on New Year’s Eve, 2008. The restaurant closed on January 1, 2009, for a two-month renovation. Their scheduled reopening, set for March 1, was delayed by a snowstorm and Maplewood Grill was born on March 3, 2009. In four years, the Maplewood Grill is ensconced in community life.

THE CROWD, Paul and Marcel Kuchler say, is younger and is more of a Vienna clientele than when the restaurant was Le Canard and more formal and cosmopolitan.

“One of the things we noticed when we changed to Maplewood Grill is that we became a bigger part of the community,” said Paul. “So, we feel a sense of commitment to the community, and our success depends on the community supporting us. We give back as much as we can.”

Maplewood Grill donates to school and nonprofit clubs’ fundraisers. They sponsor a Vienna Little League team and a Babe Ruth team. This fall, Maplewood will become a sponsor for Vienna Youth Football, as well. Whether it’s Vienna’s Oktoberfest celebration or Taste of Vienna, you see Maplewood’s participation. Their Oktoberfest offerings include traditional German dishes—which is distinctive for Vienna’s Oktoberfest.

Marcel Kuchler is no less a visible presence nowadays at Maplewood Grill than he was when the restaurant was Le Canard. He’s been in “this business” since he was 14 years old, and doesn’t see a near future that doesn’t include working at the restaurant. “I’m not the kind of guy to retire,” said Marcel. “It’s a part of my life.

“I enjoy working here. I don’t know what I’d do without the restaurant.”