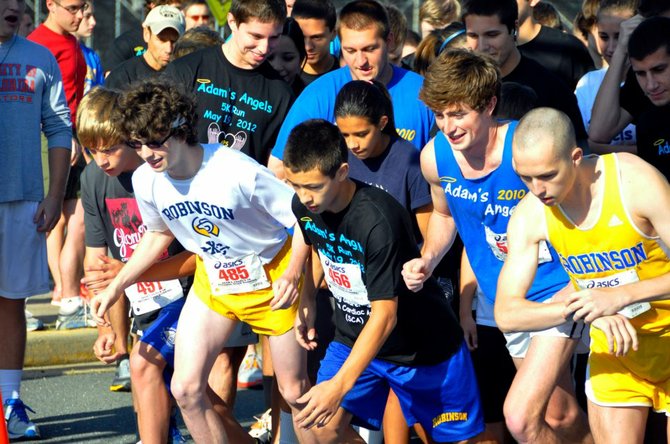 With his life stretched out before him, this would have been the spring Adam Seymour graduated from Lynchburg College. 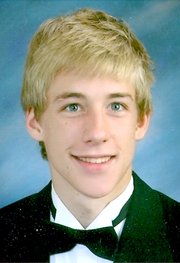 Instead, it’s time for an annual 5K race in his memory—but one whose proceeds may help save other lives.

On Saturday, June 15, the third annual Adam’s Angels 5K Run will be held at Robinson Secondary School to benefit the nonprofit Adam P. Seymour Foundation. The 5K race starts at 8 a.m., with a 1-mile fun run/walk following at 8:06 a.m. Registration is at http://prracing.racebx.com; cost is $30, and there’s also race-day registration. 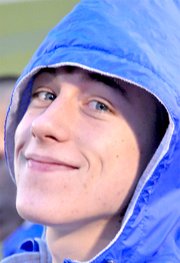 Adam pictured in a lighthearted moment.

At Robinson Middle, Adam captained the JV soccer team, later playing defender for Robinson Secondary’s varsity, all four years. And a ceramics class in his senior year revealed his talent for making pottery.

Adam discovered a talent for pottery in high school.

Graduating in June 2010, Adam planned to focus on environmental studies in college. But that August, he suffered a heart attack during a preseason training run with his college’s soccer team and died, three days later, at age 18. Out of this tragedy, his parents Jim and Beverly—she teaches second grade at Bull Run Elementary—later began a foundation and a group called Adam’s Angels in his honor. It raises money for memorial scholarships, heart research and sudden cardiac arrest education and awareness. See www.adampseymourfoundation.org/.

“Sudden cardiac arrest is the leading cause of death for young athletes, ages 8-20, in the country,” said Jim Seymour. “So it’s important to gain awareness and education to prevent this, and also raise funds so the foundation can place AEDs [automated external defibrillators] in youth-oriented venues.”

He’s also the race director and hopes this year’s event will be just as successful as the first two were. Last year’s race attracted 300 participants and raised $15,000. The 5K is two laps around Robinson’s perimeter on the neighborhood streets. Both it and the fun run/walk start and end in the parking lot at the school’s main entrance. The walk is on school grounds.

It’s family-oriented, and strollers and dogs are welcome. Prizes are awarded to the top two overall male and female finishers. Male and female age-group winners each receive a tote bag containing a custom-made Adam’s Angels beach towel, plus other items. There’ll also be door prizes for merchandise and restaurant gift certificates.

A SILENT AUCTION is also part of the fun. Items for bid include: Original watercolor paintings donated by internationally known artist Gladyne Swartz of Lorton; pottery by a local craftsman; three gift baskets of Starbucks items; a computer table; wooden serving tray and hand soap from The Nest Egg in Fairfax Corner; and a bowling package from Bowl America.

Now living in Clifton, the Seymours—including son Nick, 16, a Robinson sophomore—previously lived in Centreville’s Confederate Ridge community. Adam began playing SYA soccer at age 6 and, when he was 12, he received SYA’s “Character Counts” award from the coaches for good sportsmanship. Always kind and caring, he spent three of his teen years teaching skills to younger soccer players.

So the annual Adam P. Seymour Foundation scholarship goes to a graduating Robinson senior with particular qualities. This year, two will be awarded at the school’s June 12 awards ceremony and, explained Jim Seymour, the recipients must be good students involved in athletics, civic service and the arts. “It’s for students who exhibit the same attributes Adam did,” he said.

The foundation has also donated AEDs to Robinson for its football stadium, to the Great Falls Little League and to a high school in California. “We try to place them where people have requested them, know what to do with them and can teach others about them and their importance,” said Jim Seymour. “We also donated some to FCPS for teams having to practice away from their campus; they can take the AEDs with them.”

THIS SPRING, the foundation also presented two on behalf of Parent Heart Watch—the national voice for the prevention of sudden cardiac arrest in youth. As state coordinator for this organization, Seymour gave them to two high schools. And, he added, “We’ve met with the Fairfax Athletic Council to figure out ways to effectively place AEDs on their fields, too. And we’ll have AED demonstrations at the race so people can see, touch and learn how to use one.”

Like his older brother, Nick also plays on Robinson’s varsity soccer team. “Robinson officially retired Adam’s soccer jersey, number 5, in May,” said Seymour. “Now, the only one who wears it is Nick.”

Almost three years after Adam’s death, his father says, “We’re better, but we’re never going to be fine. It’s always there for Beverly, Nicholas and I. So we hope people come to the race and support our cause; we don’t want other families to go through what we did. Short of having our son come back, that’s our goal.”